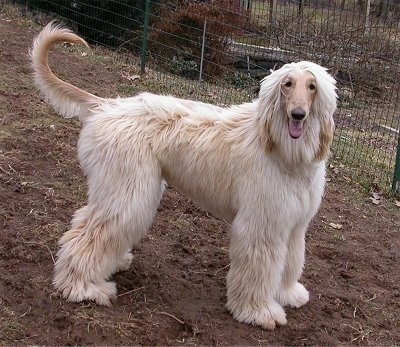 The Afghan Hound is considered an aristocratic sighthound. Tall and slender with a long, narrow, refined head, silky topknot and powerful jaws, the back part of the head and skull are quite prominent. The muzzle is slightly convex and the nose is black. The Afghan has little or no stop, which is the transition area from backskull to muzzle. The teeth should meet in a level or scissors bite. The dark eyes are almond shaped. The ears lie flat to the head. The neck is long and strong. The height at the withers should be almost level and the abdomen well tucked up. The hipbones are quite prominent. The front legs are strong and straight and the feet are large and covered with long hair. The tail has a curl or ring at the tip, but is not carried over the back. The long, rich, silky coat is most often the color of sand with a darker face and ear fringes, though all colors are permitted. White markings, however, are discouraged.

Courageous, dignified, spirited, very sweet, loyal, affectionate and sensitive, with a low dominance level, the Afghan can be somewhat aloof, but socialize well. They must be trained kindly yet in a calm and firm manner. The Afghan has been described as "a king of dogs"—noble, majestic and elegant. They tend to be suspicious of those they do not know, but not hostile. Although tough, they will pine if they are deprived of proper gentle leadership. They will do best with older, considerate children who understand how to be a gentle pack leader. Amenable to training and discipline, they can be disobedient if an owner does not give the dog clear guidelines and consistency with what is expected of their dog. This breed can be difficult to housebreak. It can also be timid and high-strung if it does not receive enough mental and physical exercise.

The Afghan Hound is not recommended for apartment life. They are relatively inactive indoors and do best with acreage. This breed can live in or outdoors, although it would be happier sleeping indoors.

The Afghan Hound needs to be taken on a long daily walk or jog. While out on the walk the dog must be made to heel beside or behind the person holding the lead, as in a dog's mind the leader leads the way, and that leader needs to be the human. Dogs that do not get to go on daily walks are more likely to display behavior problems. Teach them to enter and exit door and gateways after the humans. They will also enjoy running free in an open, fenced, safe area.

The long, thick coat demands a great deal of attention. Bathe the dog when necessary. Do not brush in between baths in order to keep coat long and shiny. Brushing a dry coat will damage the coat and even make it more easily matted. Weekly baths are not as important if your Afghan is a pet and will not be shown, but doing so will make the coat less matted and will save you time in the end. Many wear snoods indoors to protect their ears from food bowls. Some owners like to use a special air-cushioned brush called a pinbrush. This breed is an average shedder.

This is a very elegant, ancient dog, native to Sinai, and mentioned several times in Egyptian papyruses as well as pictured in the caves of northern Afghanistan more than 4000 years ago. The breed was kept pure for centuries, and its exportation was always prohibited. It therefore only reached Europe as contraband early in the 1900s. An extremely fast and agile runner, the Afghan is a sighthound, which means it hunts by sight. It was used as a shepherd and as a hunter of many types of game including deer, wild goats, snow leopards and wolves. They were also used by shepherds as herders and watchdogs. Their thick coat protects against temperature extremes. In Europe and America they have become a luxurious pet and show dog because of their aristocratic beauty. Some of the Afghan's talents are hunting, sighting, tracking, herding, watchdog, racing and lure coursing.