My Dog was Abused 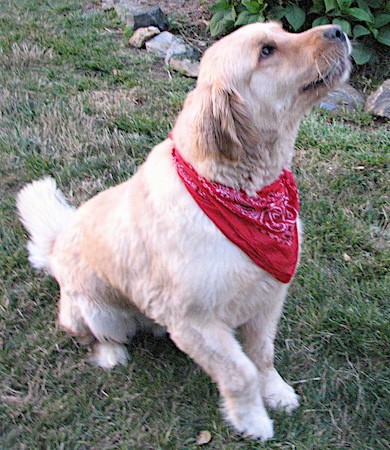 I spent four days at a ranch that had a pack of dogs who followed their owner everywhere he went. It was a pretty neat thing to see—the dogs able to roam free, very happy with following their owner.

One of the dogs in particular caught my eye. It was an 8-month-old Golden Retriever puppy.

The pup was clearly skittish and fearful of people. She did not trust them. She was, however, excellent with other dogs and had a very submissive nature. The owner had explained that the dog had just been rescued and had only been on the ranch for a few months.

This ranch was perfect for this dog, but what concerned me was that the Golden Retriever pup would once in a while bark at and circle around kids and some adults. The dog clearly didn't trust certain people, most likely due to its past abuse. When the dog would behave like this, the owner would explain to the child, their parents or whoever the dog was barking at, "It's OK, she was abused. She won't hurt you." But no one told the dog they didn't agree with the behavior. Instead the owner would call the dog in a soothing tone to come. The tone of voice said to the dog, "Good girl. Good girl for not trusting those people.”

Dog’s brains are different than our own. Unlike a human, the brain of a dog is not complex enough to plot, plan or act on logical reasoning skills. They do not premeditate or plan attacks. Their actions are results of both instincts and experiences. Dogs do not dwell in thoughts of the past or worries about the future. They live in the moment. In this case the dog’s past experience had taught her not to trust certain people. Anything could have been setting her off, from a smell that was associated with her past to a type of look—for example someone who was the same height or walked or carried themselves the same way as her past abuser. The dog was barking and circling out of fear and distrust.

Over and over again the dog would suddenly start barking at someone and I would hear people say, "Oh that dog was abused." Never did I see anyone communicate to the dog that her barking and circling was an unwanted reaction. Even dogs that were abused in the past need to know the rules. Telling a dog “no” is not abuse, it's communication. If no one ever says “no” how will the dog know what it’s doing is not what you want?

For as young as the dog was and with the level of insecurity the dog had during the time I observed, I believe that this dog only needed the owner, whom the dog did trust, to give the dog a voice command of displeasure when the dog began to react to another human in fear—a "Shhhhhh!" with a look that says, “I do not agree with the way you are reacting to this person.” A dog’s brain is not complex enough to reason out that the current circumstances and the people she was coming across were not the same as the person who had abused her. She was also not able to work out the reasoning that her new owner’s pity was their way of showing love.

The longer the behavior is allowed to go on the more it will escalate and the harder (but not impossible) it will be to change.

This dog has a high chance of developing fear biting when it grows up unless the new owner starts communicating that circling and barking at humans is not acceptable behavior. If it does escalate, the dog will either end up losing her new home or losing the freedom to roam the ranch with the rest of the pack.

This dog does not think of herself as an abused dog. She merely lives in the moment, reacting to things she learned from her past, but she is not thinking about her past. When the humans around this dog feel sorry for her, with the thought of her abuse stuck in their heads, they portray weakness to the dog. All dogs need a strong leader to be happy and humans who pity and feel sorry are not providing this mental strength that all dogs crave. This type of emotion coming from the human prevents a dog from moving forward and out of its fearfulness.

On a positive note, this pup lives with three other dogs that do appear to be well balanced. The older dog corrected the rescue pup with a growl when the pup jumped on him. The pup responded by backing off, and followed the older dog happily. Even dogs will correct one another when they see inappropriate behaviors. The older dog was not looking at this new pup as a "poor sorry rescue dog," but as another member of the pack that must behave well, like the rest of the pack. Unfortunately the older dog was not correcting the pup for barking at and circling humans.

The best thing one can do for a rescue dog is to stop thinking of the dog’s past abuse, move forward and let the dog live for the here and now. Show firm,but gentle leadership towards the dog. Do not fear or pity the dog. Let the dog feel your strength, which shows it there is nothing to worry about, you will now care for them. Humanely communicate to the dog your displeasure of any unwanted behavior and praise their good behavior. It is very easy for a dog to move on and change for the better. The vast majority of the time it is a human who is holding onto and dwelling on the dog’s unfortunate past, preventing it from moving forward. The human surrounds the dog with weakness (pity). The longer this goes on, the worse the dog's behavior will become.