Adult Dog and the New Puppy 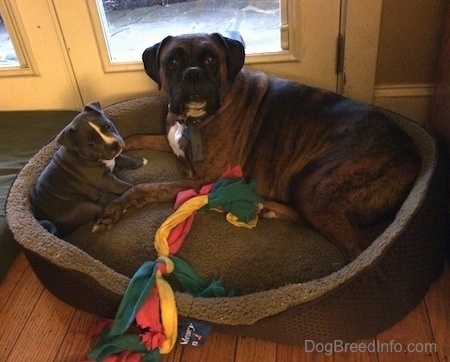 When one owns an adult dog and brings in a new puppy the humans often find themselves wondering just how to handle the every day reactions between the dogs as the pack adjusts to the new member. A lot of people end up creating issues because they not only cannot read dog body language, but they do not understand natural dogmanship and as a result they apply human emotions and human reasoning into the canine world.

While every situation between dog and puppy is unique, depending on how well balanced the adult dog is and the circumstances the humans put the dogs in, this page gives some basic rules for puppy and adult.

1. If the adult dog is at rest the puppy must be stopped when it decides to go pounce on the adult.

2. If either dog initiates play and the other looks accepting of the proposal, let them play. 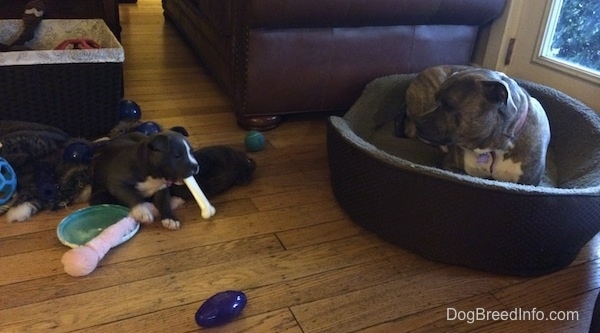 3. Do not allow the puppy to harass the older dog. Size does not matter. If the puppy is tiny and the adult is very large this is still no excuse to allow the smaller dog to harass the larger dog. It is not funny, and it is cruel to allow it.

4. Do not allow the older dog to harass the puppy.

5. When dogs are playing the play is over as soon as the adult walks away or otherwise turns its back to get away from the puppy. This is GAME OVER for the puppy. The human must walk over and stop the puppy from continuing. The puppy must learn to respect the other dogs around it. This teaches the adult dog that you have his back and he does not need to all out attack puppy because you will help. YOU are the ultimate leader, not the older dog and you must ensure the puppy does not harass the older dog. Usually a puppy can out play an adult, but this goes both ways. If the puppy walks away because it no longer wants to play the older dog needs to be told GAME OVER. 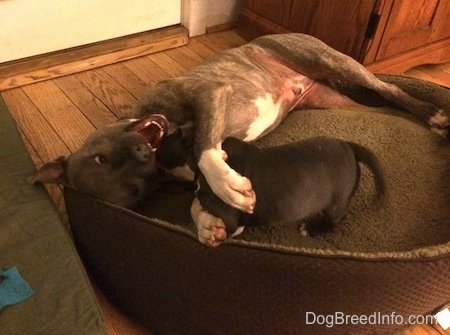 Learn the difference between when a dog is playing and when it is an actual tense situation. Just because dogs are being loud, making growl type noises, and showing their teeth does not automatically mean it is not play. Learn the difference in a dog's body language. These two dogs are playing.

6. It is not always bad when an adult dog corrects a puppy for rude behaviors. It can be very helpful and necessary to teach the puppy respect and manners. However, this must be monitored as all dogs are different and if you have a dog that you allowed to be the leader of your pack this could get out of control. You must use your own judgment with your dogs. When you allow an adult to correct a puppy it should be done only when the puppy has done something directly to the adult. For example, if the puppy is running through the house do not allow the adult dog to make up its own rule that the puppy is not allowed to run. That is your job as the human pack leader if you wish the puppy to stop running. An example of a situation that is acceptable for an adult dog to correct a puppy is if the puppy pounces on the adult while it is at rest. That type of behavior is not only rude, but it directly affects the dog that was disturbed. It is not wise to allow an adult dog to correct a puppy when the puppy was not interacting with the adult. You cannot give the adult too much power or you will set yourself up for future issues. The adult dog can stick up for itself, but it cannot make the rules for the rest of the house. Again, this goes both ways should you have an alpha puppy on your hands. 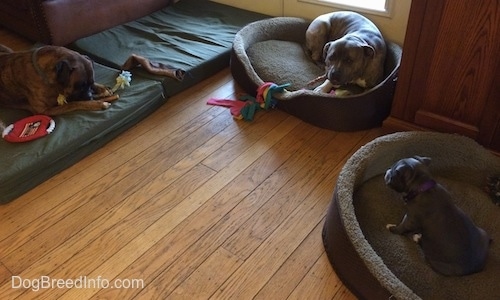 7. No bone or toy stealing. No one dog owns a toy. Do not let a toy or bone be "that dogs". The human technically owns the object, but whichever dog had it first at the moment is the dog who gets it. Do not allow one dog to walk over and take it from the other dog. Stop the dog who tried. Do not set a rule that an object is only a certain dog's object. The dogs can play together with the object, but one dog cannot steal it from the other if there is no play going on. If you allow one dog to own an object, you will be setting yourself up for future issues. That rule is kind of like toddlers playing in the playroom together. They can play together with a toy, but one child cannot decide to walk over and grab it if it was not part of the agreed on game. With all that being said, if you notice any object-guarding by the dog with the bone or toy take the object away. Guarding objects is not allowed.

9. DO NOT praise or coddle one dog over the other during this adjustment time or you will create issues. You have to silently and calmly with a mamma-bear (or papa-bear) attitude monitor and referee the interaction. Stay calm, confident, and assertive without being loud and wordy. With a 'matter of fact I mean it mode'. For instance, if you were watching two human 2-year-olds play, you do not pick one child up and oooo and ahhh them for the other to see as a punishment because they were not behaving. You simply tell the kids to play nice. You do not allow them to harass one another.

10. Do not allow your older adult dog to be a leader over you or the puppy. Do not allow the puppy to be a leader over the other dog or the humans. It is acceptable for the adult dog to correct a puppy when the unwanted behavior directly affected the adult itself, but the adult should not be allowed to make the rules. Your adult dog and your new puppy need to see that you and all the other humans are the ones ultimately in charge. The humans must learn how to "speak dog" and properly referee all interactions.

11. Time-outs do not work. A dog has no concept of that type of thinking. A dog lives in the moment. It does not understand time-out in a cage because he did this other thing 10 minutes ago. Dogs should never be punished. There is a difference between punishment and a correction. A dog should never be punished for deeds you do not like, but rather corrected. What's the difference? A correction is when you give a command of disapproval at the moment the deed is about to be done or is being done. A punishment is anything thereafter.

Read about how I adjusted my alpha puppy to my adult dogs. I allowed them to correct, but I DID NOT allow them to make the rules and be boss. It went both ways and all dogs are equal. The humans are the leaders. The actions of my own adult dogs amazed me, but I had to learn how to properly referee, which was the key. Mia the American Bully Pit