Cushing’s syndrome (CS) is a disorder of the endocrine system, or a hormonal disorder, that causes high levels of cortisol to appear in the blood. It is also called hypercortisolism when referring to the human condition, and hyperadrenocorticism when referring to the canine condition. However, these terms can be interchangeable. The condition was first discovered in 1932 by an American surgeon and endocrinologist named Harvey Cushing (1869-1939). 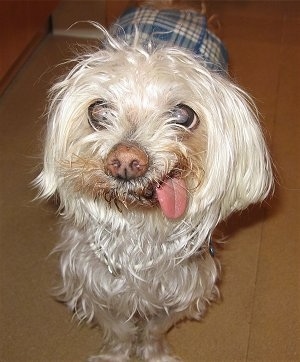 Pictured above is Chakka, a Maltese with Cushing's Ssyndrome. He was a rescue dog purchased online that later developed Cushing's. According to the vet, he is not in any pain. Normally a human condition, dogs can get it too. Basically, it causes the dog to not digest or absorb food that is eaten. Although he eats tons, he feels like he is starving all the time. Although Cushing's sometimes causes weight gain, it is causing Chakka to lose weight and he is nothing but skin and bones. It is impossible for him to gain weight. Most of his hair has fallen out, much like a chemotherapy patient, and there are sores all over his body. He is incontinent (will urinate all over), so he has to wear a diaper, which his owner changes all day long. The plaid pants that he has on in this picture are diapers, or rather "plastic pants"/diaper covers. He will eat his own poop or the poop of the other dogs in the house if the poop isn't immediately picked up. He isn't in pain, but is technically starving and not able to satisfy that hunger. He cannot absorb any nutrients. The tongue sticks out of his mouth like that because he has no teeth. Not sure if it was the Cushing's that caused his teeth to rot, but his teeth either fell out or were pulled out by the vet.

Video Clip of Chakka circling, scrounging for food, something he does all day long 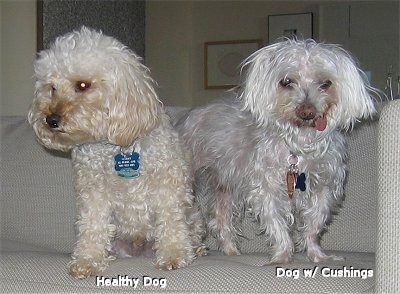 In a normal healthy dog, ACTH (adrenocorticotrophic hormone) is produced by the pituitary gland which is located in the brain. When this hormone is released, it stimulates the adrenal glands which in turn secrete cortisol (a glucocorticoid hormone) into the bloodstream. People may be familiar with cortisol due to the many “diet pill” advertisements claiming that it’s increased cortisol, due to stress, that is giving them belly fat. The ads claim that taking these pills will make them lose this fat. Who knows what’s in those pills and whether or not they actually work, but the ads should make it clear that stress can be a number of things. Besides a stressful situation that causes anxiety, other issues such as recovering from surgery, an injury, infections, pain, lack of sleep and even temperature changes are all considered to be stress. Cortisol is important because it helps the body respond to stress. When stress is apparent, the pituitary gland secretes ACTH, which in turn signals the adrenal glands to secrete cortisol which then goes to work on the problem. However, there needs to be a normal range of cortisol in the blood in order for it to work beneficially. If there is too much or too little cortisol is in the bloodstream, problems occur. In Cushing’s syndrome, this harmony is disrupted; too much cortisol is released as a result, and that’s when the patient begins to show signs that something has gone terribly wrong. 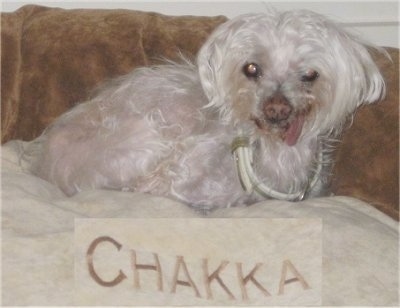 "Chakka eats poop and never stops moving, looking for food. Cushing's makes them feel hungry all the time even though they eat. Feeding him more makes him poop more." 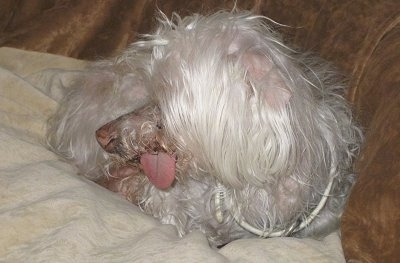 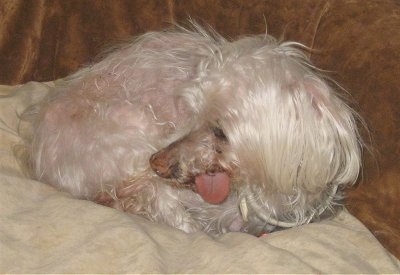 The body’s tissues must be exposed to high levels of cortisol in order for symptoms of Cushing’s to make an appearance. There are three main reasons for Cushing’s syndrome to occur. The first is a tumor on the pituitary gland, the second is a tumor on the adrenal glands, and the third is due to the prescribing of cortisone drugs such as Prednisone. Prednisone is most commonly used as a long-term drug for conditions such as allergies or arthritis. Most of the CS cases, about 80%, are cause by a problem which affects the pituitary gland.

No one patient displays all the signs or symptoms that are apparent in Cushing’s syndrome. One dog may have several of the symptoms, while another dog may also have several, but completely different ones than the other dog. A typical symptom is distention, or swelling of the abdomen. Yet on occasion, dogs will appear emaciated. There are many other physical and behavioral signs and symptoms which are listed below:

There actually exist even more symptoms than those listed above. Some may not be as obvious to the untrained eye, and some may be behaviors that are just not as common as others. There are veterinary sites that go into great detail with the signs and symptoms of Cushing’s. 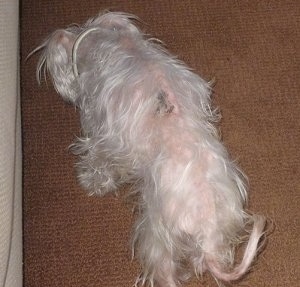 See the scabs and crust on his back, showing how bald he is.

The problem with diagnosing Cushing’s is that often the initial symptoms (enlarged abdomen, muscle weakness, lethargy) are mistaken for old age. It’s chalked up to typical inconveniences of growing old. It’s not until very noticeable problems occur like urinating in the house, losing large portions of hair or developing unsightly skin infections, that a vet is even called.

At this time, if the vet suspects Cushing’s, there are three things that should be done right away.

If these tests lean toward a positive Cushing’s syndrome result, a vet can then perform a number of screening tests (e.g. ACTH Stimulation Test) to get a definitive answer and then determine which treatment to use.

If the Cushing’s symptoms are caused by ingestion of steroid-type drugs such as prednisone, stopping this medication will reverse the symptoms usually within a month or less. However, some dogs simply cannot afford to stop steroid use due to severe allergies or other serious conditions. The veterinarian then has the challenge of testing doses of treatment medications along with adjusting the steroid prescription. In some cases there is simply nothing that can be done.

Trilostane is now the drug most vets use. It works extremely well. When given in the minimum amount for the weight of the dog twice a day or once every 18 hours it reduces the amount of cortisol in the blood without destroying the gland that produces it. The first study was done at UC Davis but lots of dogs died because the dosage was too high. More recent studies used less drug and had much better results.

One owner states: "My dog has had her dosage adjusted three times in the last year. She now takes 10 mg every 18 hours. The results are amazing. No more panting or excessive thurst, no hyper activity, and her liver enzyme tests are within the normal range."

In the past there were three commonly used medications to treat the symptoms of CS. These drugs do not cure the syndrome, they only help minimize the symptoms. They are:

Whichever disease or outside source is responsible for your pet’s Cushing’s syndrome symptoms will determine which treatment is chosen. This is the case in choosing which medication is the right one, or whether or not surgery is an option. If surgery is performed and is successful, the CS can be eliminated completely. This type of surgery is more commonly used with adrenal gland tumors. Pituitary abnormalities are less likely to be handled through surgery.

The basic facts gathered from this report are that CS usually occurs in middle-aged to elderly dogs, and that it happens when problems occur with the adrenal or pituitary glands. It is also imperative that owners recognize obvious and subtle changes in the physical appearance or behavior of their dogs. A bulging belly may not simply be the result of too many beef jerkies. If the dog starts to urinate in the house after being a housebroken pet, most likely it’s a health issue. Don’t punish the dog, but rather seek out medical help from your veterinarian. There are treatments available that can make the dog’s life more bearable to him and to the owner.