The Walk: Passing Other Dogs 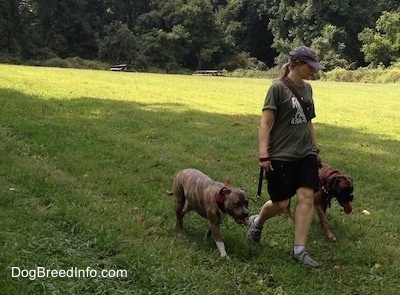 One of the places we like to walk is a state park with a paved walking/bike trail. We pass lots of other dogs along with humans on both foot and bikes. One thing that I have noticed is the dogs that are heeling next to their owners rarely react to other dogs. I like to watch the dogs coming toward us and guess which ones I think will pass nicely. I can usually tell. The owners who make their dogs heel tend to walk by with no problem. Some owners let their dog walk out in front and bring the dog in closer as they pass, letting the dog back in front right after. Some don't even bother bringing the dog in closer even if the dog is acting out. Some owners stop walking whenever they pass another dog, creating anticipation. It is interesting to see the different levels of discipline and control people have over their dogs.

One day at the park we passed a very large, muscular American Bully type. As we walked toward the dog I was admiring how beautiful it was. When the owners saw us coming toward them they stopped walking to let us pass, which was the first mistake. The path was wide enough for two cars to pass; there was no space issue. It is always best to keep walking. The owners were smiling at Bruno and Spencer while their dog got down in a stalking stance. The dog locked eyes on us. As we passed, he lunged forward snarling and barking. The owner of the dog held the leash tightly. The owners said something sweet to Bruno and Spencer "aw, look at them..." but failed to correct their own dog in the slightest. I will never understand the owners who do not correct their dogs for aggressive behaviors.

Another time we passed a barking, growling Jack Russell that was pulling toward us with all its might. Its nails were scraping across the ground as it tried to get closer. Bruno glanced over as if to say "yeah, yeah whatever..." and Spencer barely looked. The owner told her dog to "leave it." The dog didn't listen but the lady kept walking. The dogs passed with only a few feet between them.

Another day at the same park we passed a couple with a muzzled German Shepherd. As we walked toward one another the owners of the GSD had stopped to let us pass as they geared up in anticipation of their dog's reaction. Their dog reacted just like they thought it would. It growled, moaned, barked and pulled toward us. The owner said out loud, "OK if you are going to keep acting like that, you are going to have to keep wearing this muzzle." The owner's voice was happy and friendly; it was not a correction but more of a statement that was meant for me to hear. The owners of the GSD should not have stopped every time they saw a dog coming in anticipation of a reaction, because what they were really doing was creating the reaction. They would have been better off if they kept walking giving their dog a correction at its reaction, but kept moving forward. In their heads they should have pictured how they wanted the dog to act; calmly and confidently thinking to themselves, we are going to walk past this dog without incident. 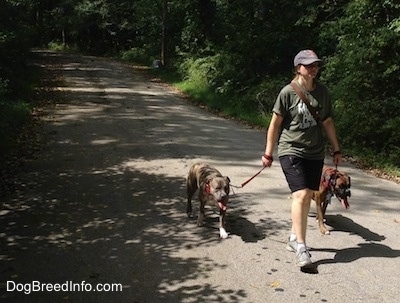 When walking your dog, do not stop as another dog approaches. This gives the dog time to gear up for its reaction. Keep your dog walking forward so the dog's mind can move onto other things. Don't stop and allow the dog to build up anticipation as if you expect it to be a big event. If you are passing another dog and you act as if something bad is going to happen, chances are something will happen. Pass as if nothing is going to happen, expecting the dog to do the same, and correcting any behaviors along the way you do not like. When the dog reacts, tell it you do not agree with its behavior and keep walking.

There are various ways to correct a dog. A few examples are with a voice in a confident tone, with a quick tug and release of the leash and some owners have success using the side of their leg or foot to redirect the dog’s attention with a touch as they continue to walk.

Some people try to correct their dogs as if they are talking to a 1-year-old. Their voices are sweet and they use words to try and communicate, practically begging the dog to please be good. Dogs listen to your tone, not your human words. They listen to calm, confident assertive people. They do not listen to anger, fear, yelling or begging.

When using the tug and release correction, do not pull with constant pressure. If you pull the leash you are going to create a natural pulling reaction from the dog. Instead pull up and toward you and give the slack back to the dog. It is a correction, not a tug-of-war game.

Having a well-behaved dog in public also depends on your relationship at home. If your relationship is not balanced in other parts of life you can't really expect to have a well-behaved dog in public. Be sure to always look at the bigger picture when trying to solve a problem you are having with your dog. A lot of times when an owner begins to ask for respect in other areas of life other problems they have with the dog just disappear. You cannot always solve an issue by only correcting the obvious behavior. Sometimes something else or a variety of other things are causing the issue.