Projecting Authority with Self Confidence and Inner Strength 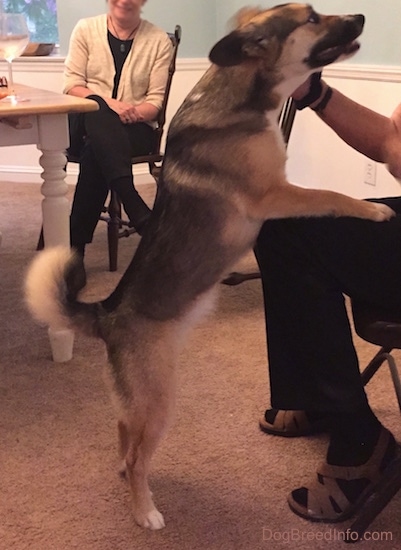 We were at a party. There was a medium-sized dog who was going from person to person jumping up on them. When the dog came to me I put my hand out and blocked it from jumping on my leg. The dog moved onto the next person, jumping up on them. When the dog walked over to Stephen it just looked at him, moving on to the next victim. The dog did this the entire time, jumping up at the table full of food and on the people. The dog would still walk over and visit with Stephen, but it never put it’s paws on him.

When it was time to go home the dog walked over to Stephen, went straight up in the air as if it was about to make contact, but suddenly lowered itself down to the floor the way a groundhog lowers itself back down, never actually touching him, as if its intent was to jump on his leg and it changed its mind.

Not once did I see any signs of Stephen telling the dog to stay down. When I asked Stephen why the dog never jumped on him, he replied, because when the dog came over I didn’t think in my head, “You cute little dog, now don’t jump on me.” I thought, “Don’t jump on me or else” and I meant it."

To a dog space is respect. I had told the dog to not jump on me and even blocked it with my hand in order to protect my pants. I succeeded in blocking the dog right before it was about to make contact, but in my head I did indeed think, “Oh my gosh you are cute, but don't jump up on my pants”, and while I stopped the dog at the moment, it did continue to try and jump on me a few more times. Whereas Stephen didn’t make any type of physical correction. He just thought in his head as he looked at the dog, “do not jump on me” and the dog felt that he meant it and on its own, gave him the respect he asked for.

It was a silent conversation much like one dog communicates with another. Without words and nothing blatantly obvious happening. A silent interaction with energy and suddle body language. A dog will respect and listen to a human who gives off an air of confidence, whereas a dog will not listen to the opposite. When it comes to dog training and behavior we always here about what words one should say and what actions one should perform, but we often forget about how important it is to also consider how we are feeling inside. It is in a dog's nature to gravitate to the strong and take advantage of and or rule the weak.