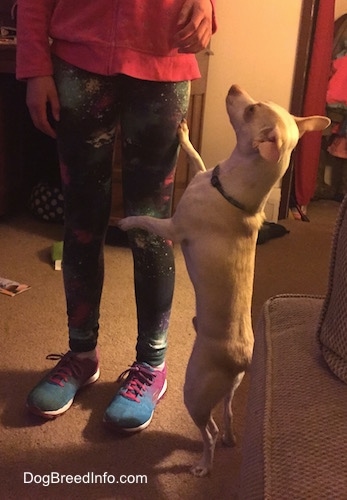 A friend of mine was having issues with a rescued toy dog. She hired a trainer and was told to use the method of turning your back to a dog when a dog jumps on a human, giving the dog treats when all four paws are on the ground. The idea behind it is to teach the dog if it jumps it gets ignored, but when its paws are on the ground it gets rewarded. The problem with this line of thinking is it does not take into account what the jumping actually means to the dog and what turning away means to the dog. Dogs that jump up and put their paws on humans are giving the humans a dominance check or simply not respecting the person they are jumping on. In the dog’s mind the dog is letting the human know it is in charge. When you simply turn your back to a jumping dog you are giving the dog space and submitting to the dog. It's a conversation using body language. Dog comes over and gives you a check, "Hey human, don't forget that I'm the one in charge here." Then, the human turns away, which is saying back to the dog, "OK, yes, you are the one. I will give you your space."

The family used this "turning away and ignoring" method for months with no results. She asked me to come and help her make the dog understand not to jump. When I walked into her house the dog immediately ran over and jumped on me. Instead of turning away from the dog I made an "atttt" sound as I leaned forward and walked toward the dog. I did not back away until the dog sat down and lowered his head slightly. Then I walked away. The dog then followed me, smelling my leg. I was not able to demonstrate to the owner how to stop him again because the dog never jumped on me again.

What I had done was communicate to the dog that I did not agree with his dominance check. He was not the one in charge of me and I wanted my space. I had earned the dog’s respect. I showed him leadership and in return he followed me as I walked away from him. It only took about 60 seconds for this conversation between me and the dog to take place.

A week later I went back over. The owners had used this communication skill with their dog and the dog had stopped jumping on them, but they were still having issues with the dog jumping on others outside the family. Even though a week had gone by the dog did not even try and jump on me. I recommended to the owners to put a long leash on the dog to help them give the dog a correction if the visitor was unable to correct the dog themselves.

What most amazed the owners of this little dog was since they had started learning and applying natural dog behavior, issues that they previously had with the dog began to disappear. For example, the dog stopped barking at the mother while she was getting her kids ready for school every morning. The dog also stopped stealing random things, running off with the object and growling when the family went to get it back. The first trainer had them addressing each issue one by one. They were not seeing results and correcting the dog each and every time it did something was getting tiresome. When the family started changing their own behaviors by becoming pack leaders and fulfilling the dog’s natural instincts they noticed the dog's behavior started changing on its own for the better. The owners were amazed at the difference. The other trainer had been addressing every single issue individually with no results. The family found that simply asking the dog for respect was what changed the dog’s behavior. Not allowing the dog to jump and asking him to heel on a leash was a big part of it.

Another example of something I observed regarding jumping happened when I was at a weekend event where people were allowed to bring their dogs. I watched one particular Miniature Schnauzer give a dominance check to its owners over and over again all weekend. He would lightly put his paw up on them, even when they were walking on a leash. I could see in the way the dog was carrying himself that he was the one in charge. At one point I observed the dog letting out a little growl as one of the owners bent down to pick him up. That dog was definitely ruling the humans. If this dog's behavior escalates someday into a snap the owners will most likely see it as a sudden behavior change, when really there were signs leading up to it that they simply had not noticed.

When dealing with a dog it is important that the humans take natural dog behavior into account and understand what their actions mean to the dog. Do not assume that your dog thinks just like you.

For more about stopping jumping, read:
Stopping a Jumping Dog