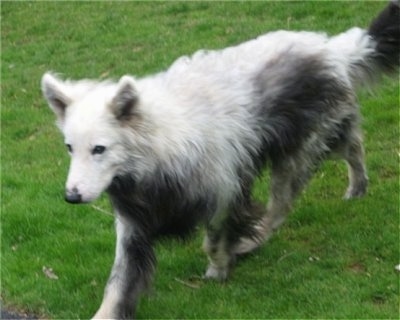 Vogt-Koyanagi-Harada syndrome (VKH syndrome) is an autoimmune disease in humans where one’s own defense against infection, the T-cells, attack the melanin-forming cells (melanocytes) in the body. Melanin is what gives color, or pigment, to our hair, skin and parts of our eyes. Since we don't yet understand how this occurs in dogs, it is most often called VKH-like syndrome, or given an altogether different name, Uveodermatological syndrome (UDS).

The first symptoms occur in the eyes of the dog. This condition is called uveitis, or inflammation of the eye. This inflammation is very painful due to pressure and bulging of the eye. Very bloodshot-looking eyes sometimes can be seen. It may eventually cause partial blindness or total blindness in most dogs, but not all. This happens as a result of the retina becoming detached, or other eye complications developing such as cataracts or glaucoma. If caught early enough, the eyes can be treated with proper medication and blindness may be prevented.

The next symptom to appear is the whitening of the hair or coat. In the case below, you can see where a Shiloh Shepherd who was once entirely black, aside from his paws, has turned almost completely snow white. 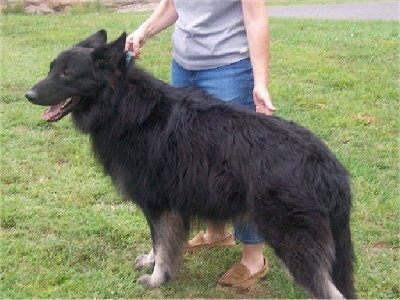 Here is Cole, of Ridgewood Shilohs, approximately two years. old, with his owner Chirsti Yonavick, before the development of VKH-like Syndrome. Below is a picture of Cole by the age of four years. 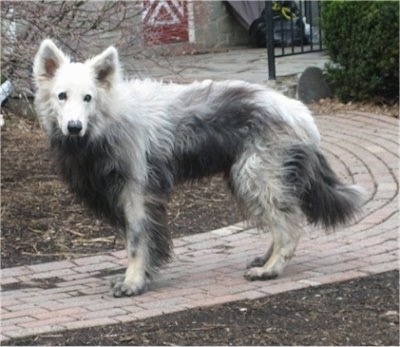 Above you can see how some of the black pigment in his coat still remains in very interesting patterns. He looks so unique, his owner is frequently asked where to get a dog like Cole. 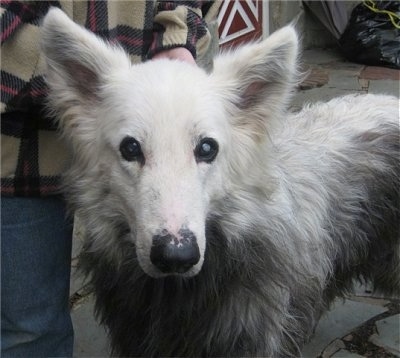 Here you can see the cloudiness in his eyes, the beginnings of the inflamed eye disease called uveitis. Cole still can see, but the future may hold restricted sight for him, or even total blindness.

Even the pigment in his black nose is beginning to go little by little, as the pink areas begin to appear.

It is pigment that also gives the nails a rich black color. Below the photo shows the once black nails have turned white and translucent. 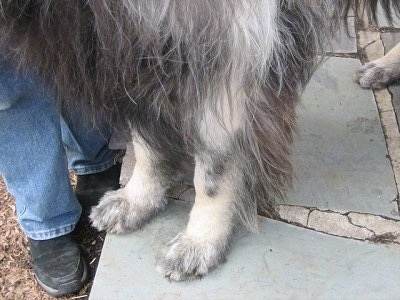 The next few frames are some shots of Cole before he contracted VKH-like Syndrome and after. The changes are remarkable. 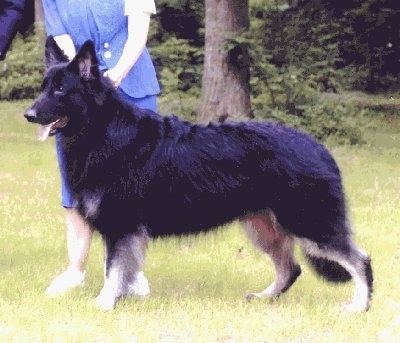 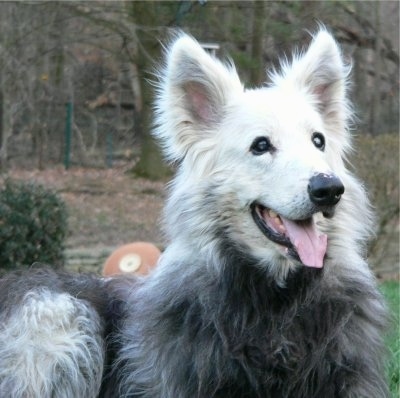 It's hard to believe that this is the same dog.

There is no cure for VKH-like syndrome, or UDS. It is believed to be a flaw in the genes. But there are treatments used simply to make the patient more comfortable and obtain a better quality of life. They are mostly focused on the eye symptoms since that can result in blindness. The pigment changes, like the hair turning white, are generally only cosmetic. Steroid drugs are often used as treatment. Cole is currently taking 10 mg. of Prednisone orally, weekly. This helps alleviate the pressure in his eyes, thus the pain, and helps keep the overall condition at bay.

It's easy to see, after reading the above prescription for Cole, that his owner has taken on quite a commitment in order to keep him comfortable and as healthy as possible. Also, she was a responsible breeder and did not breed Cole since this syndrome is inherited.

*** Special thanks to Christi Yonavick of Ridgewood Shilohs for the use of her dog, Cole, in this study.
*** Photos courtesy of Christi Yonavick, and from the author of this article.