Why did my dog do that when he knows it's bad? (But does your dog really know it's bad?) 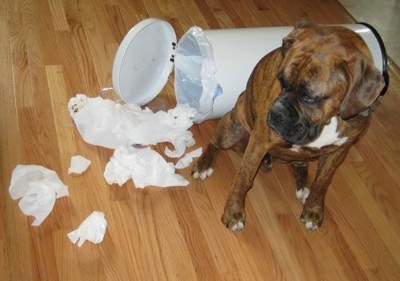 Dogs are not mechanical creatures, nor are they humans. Their brains do not work in the same way that a human’s does. They lack human reasoning and some of our more complicated human emotions, but these are replaced with their own unique abilities that we would not trade for the world. That is what makes animals so special; they differ from humans. Taking the time to learn how it thinks and what makes it tick will help you successfully communicate with your dog. Give your dog what it needs, rather than only taking what YOU want from your dog. Those who do for others are, generally, happier than those who only focus on themselves.

If you had a snake as a pet, you would more likely see the snake as the animal it is and try and give it what it instinctually needs, for example, a hut to hide under. Unfortunately, many people humanize their dogs and perceive them as having human tendencies. In doing so, the dog suffers because he does not get his instinctual needs met.

Dogs do not reason, they react. Dogs never premeditate their actions, meaning, they never think, "I am going to bite that mailman today." When a dog bites, it is most likely because the human is not communicating with the dog properly. There are certain things our canine friends need to be satisfied and happy. When they don't get them, they react accordingly.

Dogs, and animals in general, have a universal language. They read one another's energy/emotions. Humans can also read energy, but most humans have let this ability fall dormant. If you are displeased, your dog will know it when you walk into the room because it feels your anger and the energy that is produced by this emotion. Dogs do not understand that the reason you are displeased is because they chewed up your couch or peed on the floor. The only way to make a dog truly understand something is wrong or bad is to catch him at the moment he is committing the deed, or the split second beforehand.

Dogs are pack creatures. Just because the alpha member is shunning them doesn't mean they know why, they just recognize that you're displeased. The slinking behavior is a generalized plea for forgiveness for crossing over boundaries or limitations the pack leader places on its subordinates (lower members of the pack), not an acknowledgment of a specific wrongdoing.

Here is an example: if your dog chews something up and in the past you have yelled or corrected him after it was chewed, let’s say the trash, your dog now thinks it is bad for that trash to be on the floor. Because your correction did not come at the right time, your dog may not understand that the act of chewing the trash is the unwanted behavior, he may only think that it's bad to have trash on the floor. Therefore, the dog chews the trash, sees trash on floor and suddenly it's BAD. He slinks away or displays submissive signs because he knows you are going to be upset and he will be punished. Yet, he chews the trash again because he does not know that CHEWING the trash is the unwanted behavior. Your dog knows you are mad, but unless you caught him in the act, he does not know why. Consequently, if you throw a piece of paper at the trash, miss and the paper falls to the floor, your dog may bark, as he knows trash on the floor is not in compliance with how the world is supposed to be. He will bark to alert you that something is out of place. When you pick the paper up and throw it away in the trashcan, order will have been restored to the universe and they will settle down.

Tip: Don't use your dog’s name when correcting him. His name should only be used for positive reinforcement.

In order for dogs to successfully live among humans, the humans must be the pack leaders. In the wild, pack leaders do not give affection to lower members of the pack unless it is earned by exhibiting wanted behavior. What they do give are rules the pack must follow, limits to what they are allowed to do, and boundaries that the pack must not cross. This social structure makes the dog feel safe and secure. When dogs live with humans they experience a human trait called affection. Love is embedded in all animate creatures and affection is the exhibition of that love. However, affection is not as frequently displayed in the dog world as it is in the human world. An example of affection in dogs is displayed by licking, like when a group returns after hunting and is greeted by the puppies/adolescent dogs that did not participate in the hunt. Affection between two different species is something humans have introduced to dogs and humans must learn the proper times to give it in order to properly communicate.

Affection is wonderful and dogs thrive on this human characteristic. However, too many times we give our dogs only affectionate love and we overlook their important canine instincts. The thing that keeps the pack solid and the members secure is consistent, firm, confident discipline. When a dog is lacking in discipline, he will lose his direction, become unstable, confused, insecure and unhappy. The lower dogs look to the pack leader for guidance and direction. Their instincts tell them that without a strong, consistent pack leader, they will not survive. Therefore, it is instinctual for a dog to try to take over if they do not see you as a consistent, strong leader.

Note: Do not confuse excitement in a dog for happiness. This is another way in which we humanize a dog's behavior. A dog who runs around very excited is lacking in mental and physical exercise and, in most cases, leadership as well. Dogs cannot speak words, so they are unable to tell us what they really need.

Dogs also need to be taken on daily walks. In nature, birds fly, fish swim, and dogs walk." For a dog, walking is a migration instinct. Packs walk to find food. The leader leads the way and the lower members happily follow. Taking a dog for a walk is not only for exercise but also for the mental fulfillment of your dog’s instincts. Running around your backyard, playing with another dog, chasing a ball, or taking your dog to the dog park is not going to satisfy this instinct.

The biggest mistake dog owners make is that they forget dogs are animals. We humanize dogs, as it pleases the human inside of us to do so. Too many times we humans use dogs to satisfy our own needs, and overlook the fact that our canines, what we call “man's best friend,” have their own needs. People do not think about what the "animal" in their dog needs. Dogs help people, and it’s high time people start helping dogs by taking a step back and seeing dogs as animals, learning what these animals need and giving it to them. Then, and only then, can we also be our dog’s best friend. 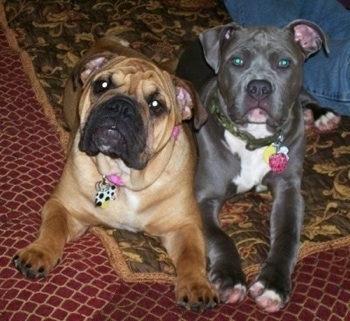 "We adopted Miss Piggy as a puppy from a breeder. I drove four hours one way, extremely sick, to get this dog for my husband for his birthday. We have been married ten years and he has always wanted a Bulldog. I found her and knew we had to have her. Every Bulldog we'd ever seen was white or brindle; she is red. Miss Piggy is ten months old. She is the Alpha in our house; all the dogs listen to her. She is the boss and is extremely stubborn. She loves everyone. Her best friend is Gabe, our nine-month-old blue Pit bull. They are about the same age and were raised together. I am currently reading Cesar Millan's book, "Be a Pack Leader." I definitely need this with this girl. She knows she's the boss of even the people. She uses her weight to knock things out of her way. She is a spoiled princess. I know we caused it. It took us so long to get a Bulldog. We spoiled her rotten. She has had so many health issues already. She has had two cherry eye surgeries on the same eye, and needs another one. She has skin issues as well. She is hard to get a pic of, she is always running around, playing with a ball. She is such a joy to have in our home. There is nothing like slobbery bulldog kisses. I love to smooth her wrinkles. She loves to have her belly rubbed and her butt scratched. She loves to play fetch and chase balls around the house. She is just a big bundle of love." 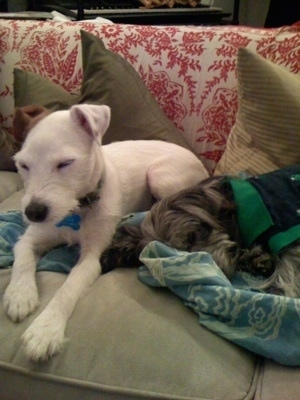 "Ferris is a purebred Jack Russell Terrier and Charlie is a terrier mix. They are both rescue dogs. Ferris is a perfect example of a Jack Russell Terrier. He is spirited, loving, and extremely intelligent. Charlie has a few immune system problems and a chronic skin condition. They are the yin-and-yang of dogs. Ferris gets plenty of exercise. I walk him and I am working on teaching him to run alongside me while on my bike. Charlie is getting used to being a dog. He was in a cage for over two years at a no-kill animal shelter. He did well crate training and learning to walk on a leash...or to walk at all. Caesar Millan's show has been really helpful. I used to let Ferris do whatever he wanted. I have learned to be a pack leader or both my sanity and his."