Wasp and Bee Stings Can be Deadly to our Pets 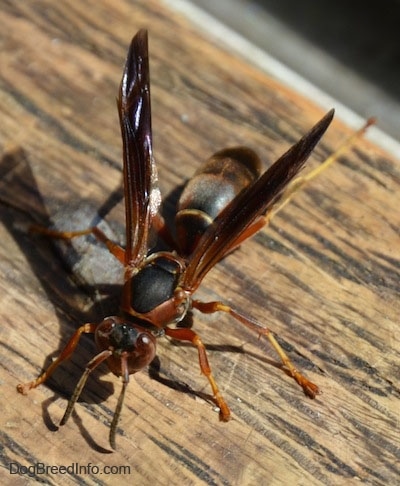 Close-up of a paper wasp

George will be missed in the biggest way! Heart attack and stroke took him much too early on his way to a dog show in Merlin, Oregon, Indian Mary Park. When his entry number was called, I tearfully had to answer, “Deceased....”

George was a Visitation Therapist with a heart of gold, bringing comic relief and smiles to many, and truly the sweetest boy with personality PLUS. We are totally devastated and heartbroken....

Here is how it happened...

Two wasps (rather, their remains) were found in his stomach and the tissue samples showed that when he swallowed them, they went down fighting, as there were wasp stings in several places at the very back of his tongue, down his throat all the way down his esophagus. The report states that anaphylactic shock from these wasp stings appears to have brought on the chain reaction leading to heart failure. It was also reported that the anaphylactic shock can cause the dog's body temperature to spike very high, very quickly (his at time of death was 109 F), thus leading to the stroke.

Dissection of heart, lungs and other major organs showed that they were healthy and normal before the stings. "This tragedy was so hard for us to handle and we had to have answers," said his owners. “We had to know why he stroked out and had heart failure so suddenly, when a little over an hour before, he was silly, playful and romping about, as we were backing the last items needed to take with us in the motor-home.”

Please take caution with your pets when wasps and bees are in the area. These little pests can be deadly!

Insects and Other Bugs