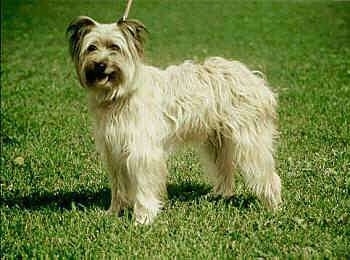 The average PyreShep is a light, fine-boned dog that comes in two main coat types. The “smooth faced” Pyre has short, smooth hair on the face and a double coat on the body, with tufts of hair on the back of each leg and the bottom of the tail. The “long coat” type is further divided into two varieties. The “Demi Long” Pyre has medium length hair on the face and a long, flat coat on the body. The “Rough Faced” Pyre has long hair on the face and body. The rough faced dog bears a resemblance to Benji and other terrier mixes. Though ears are traditionally cropped and tails are usually docked, natural ears and full tails have become increasingly more common. When left natural, the ears are usually semi-prick or rose. The uniqueness of this breed makes it very recognizable to dog enthusiasts, but the dog does not usually appear to be a purebred to the everyday population. The general structure of the Pyre makes for a very athletic and lightning fast dog.

Like all breeds, the Pyrenean Shepherd’s temperament is a very complex matter. They vary greatly from different lines to different techniques used to raise them and how much exercise, both mental and physical, they are given. They are intelligent and are not the type of dog for an owner who does not wish to put a lot of time into keeping them mentally challenged and very well exercised. Owners should be warned that this breed was originally bred to alert the guard dogs of any possible threat. Because of this, they feel it is their duty to bark at anything and everything that comes within proximity of their yard or their people. There is a fine line between due suspicion and out of control fear-barking or aggressive-barking and dogs need to be taught what is acceptable barking and what is not. Even with proper socialization, Pyres can still go through a long teen phase where they are very cautious of people before they mature and settle down at around 2 years of age. Anyone wanting a Pyre needs to have the time and patience to possibly dedicate months to training and developing a well-adjusted dog. The reason they seem so obedient to people that meet them is because they are often only bought by very experienced, dedicated dog trainers that spend a lot of time and energy shaping the dog’s behavior. Anyone with little training experience that just wants a companion should either consider a less difficult breed or do a lot of research on dog behavior and positive training methods.

Pyres vary in this category. Generally, the longhaired dogs are 15 to 18.5 inches at the withers. The smooth-faced dogs are sometimes larger, at 15-21 inches at the withers. The ideal weight is as little as possible and in the standard it states that the ribs should be readily felt. This is especially important in a working or sport dog because they need to be as limber and agile as possible. The normal weight is about 20 pounds for the average sized dog, though it varies from 15 to 30.

Luckily, this breed remains moderately healthy. All adult dogs should be evaluated for hip dysplasia and eye problems, though. Elbows and hearing may also be checked.

The Pyre can survive in any amount of space given to it. It is the amount of mental and physical stimulation that really makes a difference. If you are going to be away from home for more than a few hours at a time, the Pyre is probably not a good choice for you. It is not safe to leave it outside alone; many dogs will chew things when left alone at home for long periods of time. Remember that a tired dog is a good dog. Under-exercised dogs and those that do not get their minds properly challenged will be the dogs getting themselves into trouble.

This breed has endless stamina and needs daily exercise and training in order to remain happy and well behaved. You can mix it up: take a long hike one day, go swimming the next, go for jog, just take a long walk, play fetch, etc. The Pyre is happy when it can do something fun with its owner. Also, mental stimulation is just as important as physical stimulation. Just like children need to go to school, Pyres need to learn new things. They tend to learn new tricks very quickly, especially as puppies. Basic obedience training is useful and a solid recall needs to be drilled from puppyhood. Pyres enjoy sports such as agility, rally and herding, and they are very good at them as well.

Pyres are a very long-lived breed. When considering one, remember that your commitment could last over 15 years. Pyres age gracefully and often remain vivacious until they are very close to the end of their lives.

The smooth-faced variety requires little grooming and has an average shedding coat. The rough-faced variety should be combed or brushed 1-2 times a week. It doesn’t shed hair onto furniture but hair will come out when it is being groomed. Sometimes, if a rough coat is not brushed, it will start to cord in the rear but will mat very badly behind the ears, elbows and belly. Also, snowballs tend to get stuck on the long hair on the belly and legs, and also in between the toes which can cause pain. Booties can be worn to prevent this, and hair between the pads should be kept short.

They are members of the herding group and were bred to move sheep in the French mountains they were named after. However, many Pyres seem to exhibit a terrier-like personality: they have a high prey drive in general, love to bark, and have an uncanny ability to manipulate people to get what they want. They are a smart breed and at times they seem to have a very developed reasoning ability, such as has been said for breeds such as the Border Collie. This breed’s intelligence, speed, athleticism and propensity for mischief can only be described in superlatives. 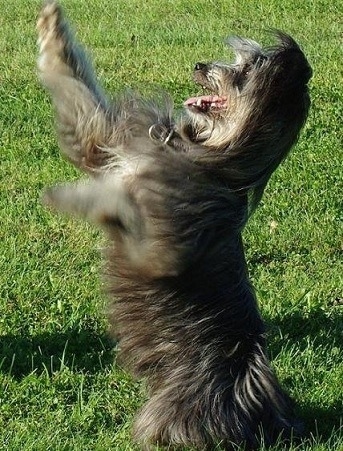 "Li (pronounced "lee") is my PyreShep who was born in August of 2008. I have had him since he was a little puppy and he is my best friend. We go for hikes together, we go on walks and bike rides, we swim, we learn tricks, and we do agility. Li loves other dogs but is a little shy around people. He loves to run and is very fast! We live out in the country with lots of animals so he enjoys playing with our other dogs and herding the goats. Li knows lots of tricks such as spin, roll over, wave, sit up, weave between my legs, vault off of me, jump into my arms, and more. He is a grey rough-faced dog and is 17 inches tall and 19 pounds. He is a very unique little fellow because he has a severe under-bite, which makes him look like he is smiling all of the time!" 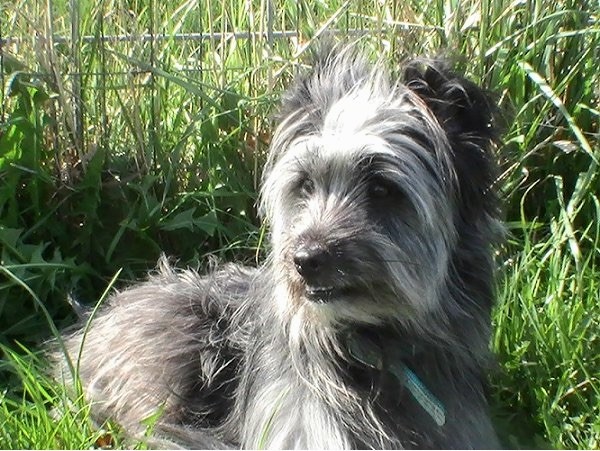 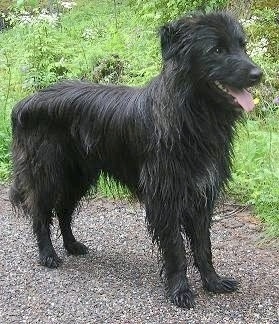 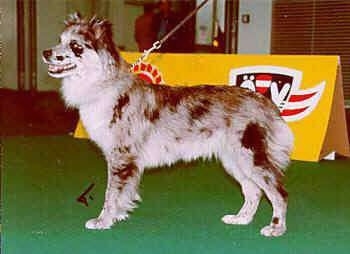 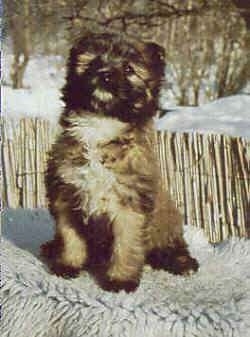 This is a little puppy. Photo courtesy of Christian and Monika Janes, Berger des Pyrenees and Berger Picard 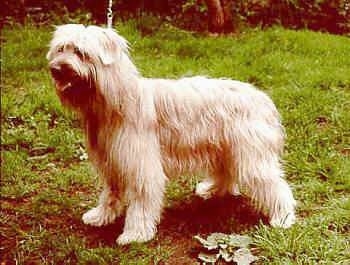 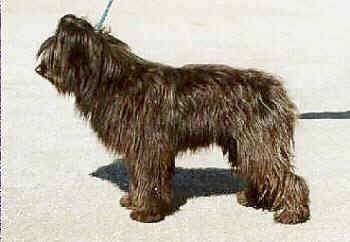 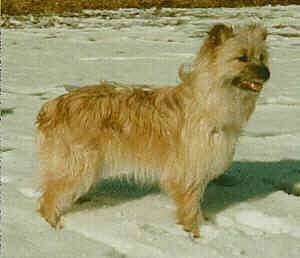 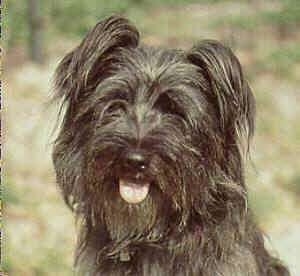