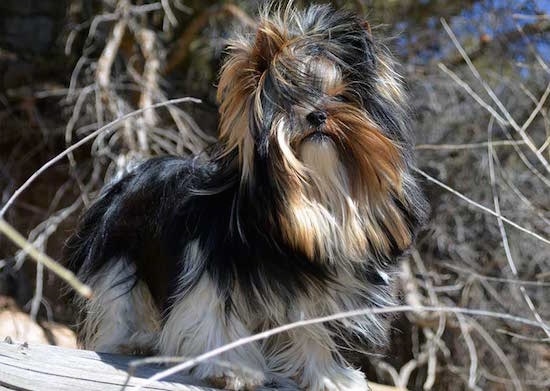 The Biewer Terrier’s body is that of a long-haired toy terrier whose hair hangs evenly and straight down the side of the body and from the base of the skull to the end of the tail. The animal should be very compact and neat. The tail should be carried up. The outlines should give the impression of a powerful and well-proportioned body. The hair on the body has a length of ¾ down the sides of the dog, or long enough to reach the ground, and is absolutely straight (not wooly), shiny like silk and of fine silky texture, without an undercoat. Coloring of the coat of the trunk and the head piece are as follows: rather white or blue-white broken or closely blue absolute, or black without brown coloring. Pure white hair on the breast, belly and legs. The head is symmetrical colored white-blue-gold. A Biro Yorkshire Terrier is when a Biewer Terrier has a lot of dark chocolate color on a white background.

Biewer Terriers seem oblivious of their small size. They are very eager for adventure. This little dog is highly energetic, brave, loyal and clever. With owners who take the time to understand how to treat a small dog, the Biewer Terrier is a wonderful companion! They are affectionate with their masters, but if humans are not this dog's pack leader, they can become suspicious of strangers and aggressive to strange dogs and small animals. They can also become yappy, as the dog does their best to tell you what THEY want YOU to do. They have a true terrier heritage and need someone who understands how to be their leader. They are often only recommended for older, considerate children, simply because they are so small, most people allow them to get away with behaviors no dog should display. This changes the dog’s temperament, as the dog starts to take over the house (Small Dog Syndrome). Biewer Terriers who become demanding and dependant appearing to need a lot of human attention and/or developing jealous behaviors, snapping if surprised, frightened or over-teased, have owners who need to rethink how they are treating the dog. Owners who do not instinctually meet the dogs needs can also find them to become over-protective and become neurotic. Biewer Terriers are easy to train, although they can sometimes be stubborn if owners do not give the dog proper boundaries. They can be difficult to housebreak. The Biewer Terrier is an excellent watchdog. When owners display pack leadership to the Biewer, they are very sweet and loving and can be trusted with children. The problems only arise when owners, because of the dog’s cute little size, allow them to take over the house. The human will not even realize it, however know that, if you see any of the negative behaviors listed above, it's time to look into your pack leader skills. These are truly sweet little dogs that need owners who understand how to give them gentle leadership. If you own a Biewer that does not display any of the negative behaviors, high-five for being a good pack leader!

The Biewer Terrier tends to have a sensitive stomach, but with a good diet and controlled treat distribution, it does well.

The Biewer Terrier can live in an apartment if it gets enough exercise. They are fairly active indoors and will do okay without a yard.

These are active little dogs that need a daily walk. Play will take care of a lot of their exercise needs, however, as with all breeds, it will not fulfill their primal instinct to walk. Dogs that do not get to go on daily walks are more likely to display behavior problems. If your Biewer Terrier zooms around the house like a speeding bullet, it is a sign that he needs to go on more/longer walks where he is made to heel beside or behind the human. Remember, in a dogs mind, the leader leads the way. They will also enjoy a good romp in a safe open area off lead, such as a large, fenced-in yard.

As a companion most owners prefer to have this breed in a "perpetual puppy cut." A bath at home about every two to three weeks will maintain a healthy coat if it is combed out with a wire comb once a week. Show Coat: The Biewer Terrier will develop a coat that reaches the ground. Some breeders wrap the coat to produce a very impressive elegant floor-length coat for the show ring. Their coat is very similar to human hair, but it is not suggested to use human shampoo as dogs have a different pH than humans. Using human shampoo can result in dry, itchy, flaking and sometimes allergic reactions in their skin. It is best to always brush the Biewer that has been sprayed with a light mixture of conditioner and water. Never brush a Biewer Terrier when it is completely dry as it may damage the coat. Ears should stand erect as young puppies. To keep them erect they must be trimmed every few weeks. By beginning about 1/3 of the way down from the top of the ear, carefully snip or shave, with a trimmer finisher, the hair from the inner and outer ear surfaces.

The Biewer Yorkie was originally a piebald genetic recessive gene occurrence from two Yorkshire Terriers. It originated in Germany on January 20, 1984 from a breeding by Gertrud and Werner Biewer's Yorkshire Terriers. In this particular litter they produced a piebald Yorkie puppy from a genetic recessive gene. This piebald puppy's registered name was Schneefloeckchen von Friedheck (Snowflake) Sire: Darling von Friedheck, a FCI World Junior Champion in Dortmund in 1981 Dam: Fru-Fru von Friedheck, a FCI World Junior Championess in Dortmund in 1981. Gertrud and Werner Biewer found this puppy to be quite beautiful and began a selective breeding process to produce more piebald puppies. Gertrud and Werner Biewer named these Yorkies with white markings "Biewer Yorkshire Terrier à la Pom Pon." It was from these breedings the Biewer Yorkie was developed. The breed was officially recognized in 1989 by the ACH (Allgemeiner Club der Hundefreunde Deutschland - ACH e. V).

Today Yorkshire Terriers and Biewers are considered two different breeds. Against the wishes of some of the Biewer clubs, some American breeders are importing Biewers and crossing them with Yorkshire Terriers and calling them Biewer Yorkies. The clubs state, "Breeding back to the Yorkie is a big no-no, as purebred is NOT achieved by breeding with another breed."

A hybrid breeder who mixes the Biewer and the Yorkie states, "There can be Biewer and Yorkshire color puppies in a single litter, but only in the F2 generation. In the F1 generation, if you breed a Biewer and a Yorkshire, you get only Yorkshire color puppies (black and tan). If you keep a puppy and breed this again to a true Biewer (third generation Biewer) you will get Biewer and Yorkshire puppies. If you keep again a puppy, no matter if Yorkie color or Biewer, and breed this again to a Biewer you get only Biewer puppies." Find out more about multi-generation crosses.

The BTCA states they were involved in a two-year study with the geneticists at Mars Veterinary and were able to determine that the Biewer Terrier is now a distinct breed of its own and not a tricolored Yorkshire Terrier.

In April of 2014 the Biewer was accepted into the AKC/FSS (American Kennel Club Foundation Stock Service) under the name Biewer Terrier. The AKC has listed the BTCA (Biewer Terrier Club of America Inc.) as the AKC/FSS affiliate club.

Some breeders disagree with these changes, stating that is not the breed's name. The Biewer Yorkshire à la Pom Pon is also called the Biewer or Biewer Yorkie. 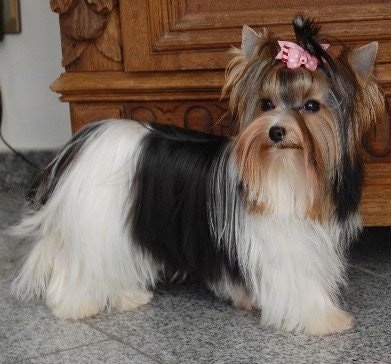 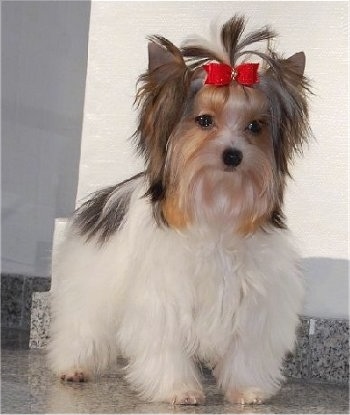 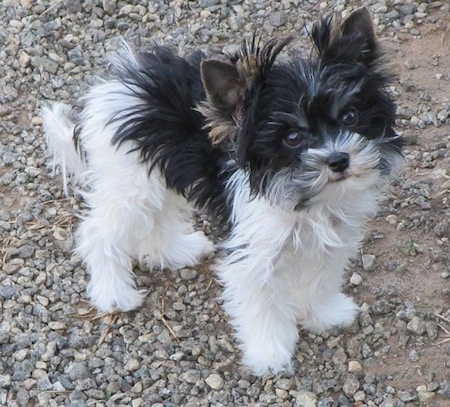 Luke the Biewer Yorkshire Terrier at 7 months old—"This is Luke From LPC Biewer Terriers. He is so sweet and full of personality. I hope to get him certified to become a therapy dog to take to hospitals and nursing homes." 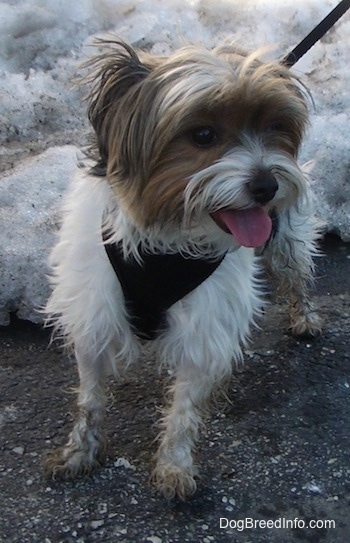 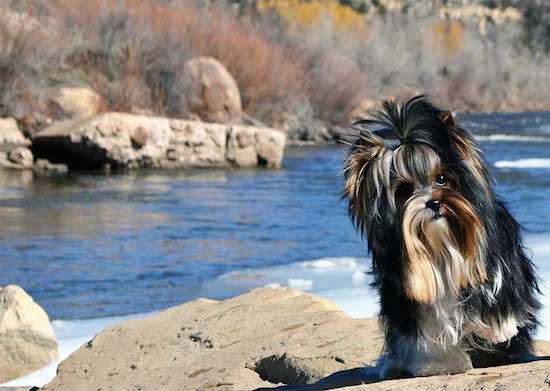 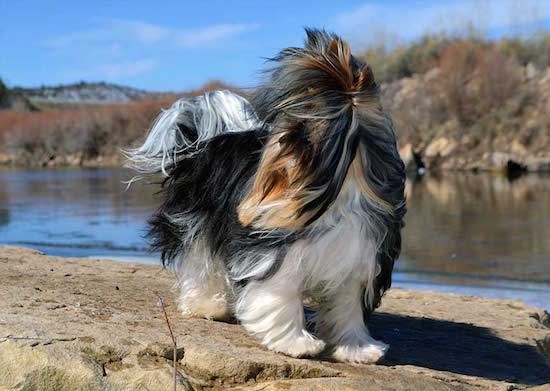 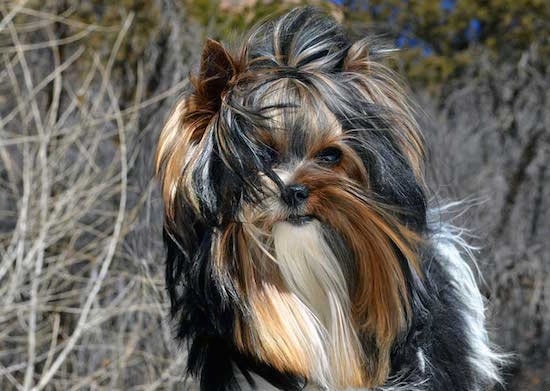 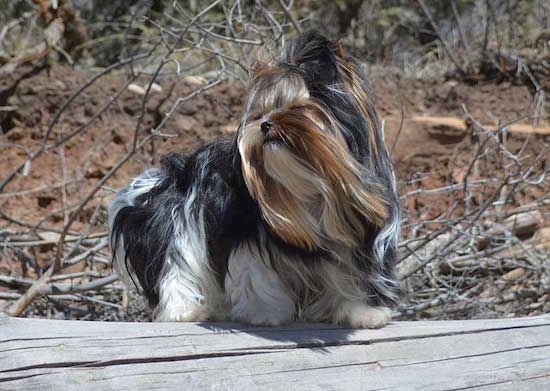 See more examples of the Biewer