Some think you can keep breeding a dam (female mother dog) until the dog shows signs of problems, but this type of breeding is not only taking a chance, but is bad breeding practices. Never breed a dam after 5 years old and before age 2. Even if your dog is in great shape, you are putting the mother dog and the unborn puppies at risk.

True story shared by a vet:

A mother dog had four successful litters in between the ages of two years and five years. She was a champion-bred dog coming from strong show lines that produced champion puppies and had no problems with pregnancy and whelping. The breeder had decided to breed his dam just one more time at age six as she seemed in perfect shape to have just one last litter.

The pregnancy seemed to be going well, as it always did with this dam. At midnight the breeder noticed green discharge and a dead decomposing puppy came out. The breeder hoped that after getting the dead puppy out of the dam the rest just might be born healthy and normal, but no. Something was really wrong.

He set a limit of four hours to wait for the next puppy to come or for the dam to go into distress. Neither happened, the dam acted normal, but still no puppy and no contractions after four hours. 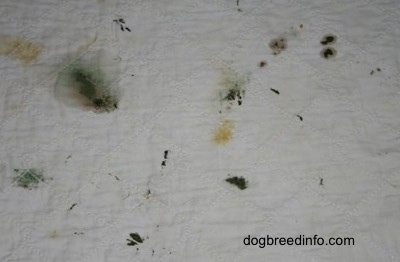 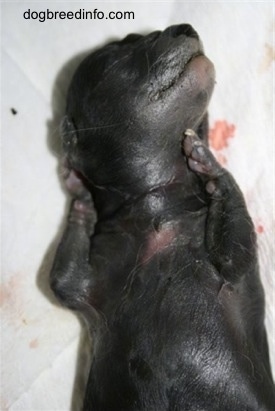 The dam was acting normal. She was in good spirits so the breeder had decided to wait until 7:30 a.m. before going to the vet. When 7:30 came around and no puppy was born and no puppy heartbeats could be heard, the breeder called the emergency vet and arrived at the office at 8:00 a.m. The vet could not hear any heartbeats either. 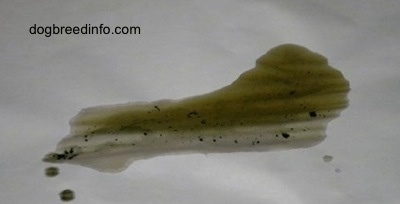 The vet gave a shot of oxytocin to try and help the dead puppies come out. Oxytocin is not the best drug to use on a dam because it can make the placentas detach resulting in the loss of a puppy, but it was obvious by the flood of green that was coming out of the dam that the placentas were already detaching. At 8:00 a.m. the shot was given. At 8:10 another dead puppy came out. This puppy was not as decomposed, but had died from living in the toxic environment. The puppy pictured below was decomposing, but the sex was distinguishable. 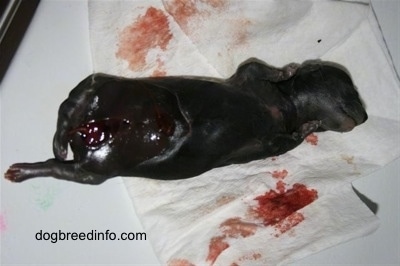 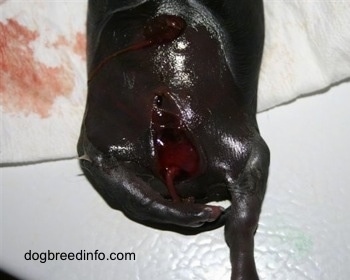 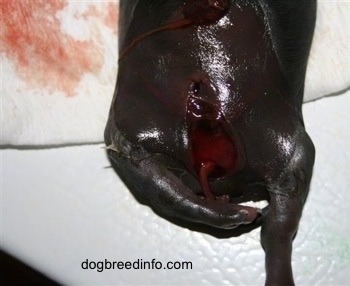 The vet waited another hour and feathered the dam trying to get the pups out. She feathered and feathered, but no puppy was presenting. She could feel something soft, like a bag of fluid. The mother dog was still not in distress at this time, but she would not put down the dead puppy. She carried it in her mouth all over the office. The vet suggested that they do a caesarian in order to save the dam. She could have given more oxytocin shot to help one puppy at a time come out, but the breeder made the decision that he was going to spay the dam anyway. He gave the OK to go ahead and do the caesarian. He was worried about his dam and wanted the dead puppies out. The longer they stayed inside the mother dog the greater risk she was in, including death. The decision was made to do everything it took to just save the dam.

They put the dam under and started the operation. Out came a grossly deformed dead puppy. It was decomposing. The one vet tech was trying to revive the puppy, but the vet soon realized the skin was coming off. It was long dead and deformed. He gave orders to stop. The pup was gone and needed to be covered up. 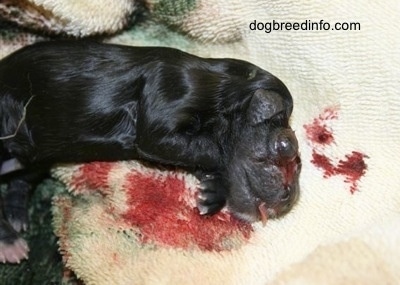 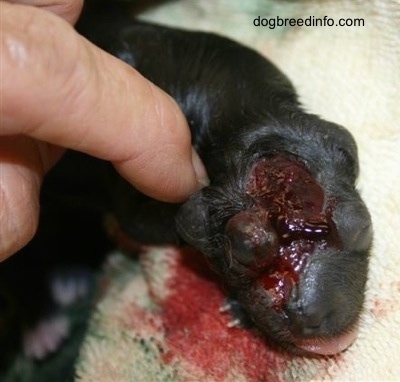 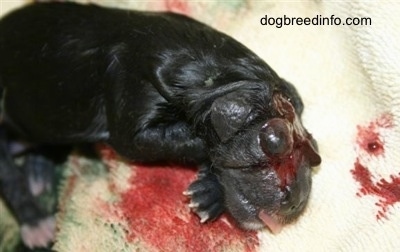 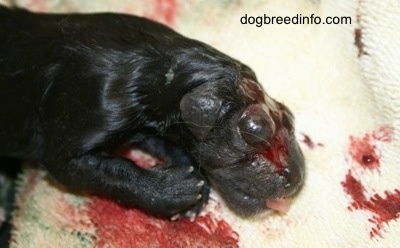 The last puppy to be born came out. This pup didn't look like it was decomposing. The vet tech started to rub the puppy to see if they could revive it. The mouth was syringed out. After a bit the tech said she heard a heartbeat, then a gasp and a squeak. One puppy was alive. She was congested, and had a lot of fluid, but was not in the toxic environment. This lucky puppy was in a uterine horn all by himself.

The vet believes this little pup was ready to be born a while ago and was going into distress. This puppy was very far up in the horn. The dead puppies were blocking his way into the world. Had they decided to not do the C-section, this puppy would have also died.

The third pup, the vet stated, was in a ball, and it is very hard to deliver a soft mushy ball of a dead puppy. They just do not come out on their own until they decompose a little more. It was not pleasant.

The dam ended up getting ill from eating that first necrotic placenta from the decomposing puppy and the toxic horn.

The advice of this vet is to never breed your dam after six years of age. Some believe that you can keep breeding your dam until she presents problems, but it is taking a risk. Those problems often start after age six. When a dam starts having problems  after six years old it is time to retire her from breeding. Each litter will get worse. Your dam will tell you when her body has had enough with smaller litters, more deformities, miscarriage, and just not getting pregnant.

Think of your dam. If she gives you a litter of puppies at ages two, three, four and five, you are blessed.

New evidence says you can breed your dam in back-to-back breedings. Meaning you could breed her at two and two and a half, then again at three and a half and four, and again at five. This would give you five litters and is possible if your dam is having smaller litters and no problems. Each dam is different and copes differently.

Sometimes a back-to-back breeding is beneficial to the dam, and it is considered fine if your dam has small litters and she is not skinny, missing hair, and is in good health. Always check with your vet before breeding and have a pre-breeding exam.