Male dogs can start to have sperm at seven months old, but ten months is more common. Young dogs do not have quality sperm. Almost all dogs will have sperm by one year.

Stud dogs are at their prime between 18 months and 4 years old (or 5), after that, the quality of the sperm starts to lessen, and the ability to penetrate eggs, lessens. By 10 years old, most stud dogs do not produce sperm that will impregnate a bitch.

A tie is a natural phenomenon of dog breeding in which the bulbus glandis of the male's penis swells inside the bitch's vagina. The dogs are virtually locked together for 15-20 minutes (two to 30 minutes is also normal), during which time ejaculation has taken place. The sperm is released at the beginning of the tie, during the happy feet dance (see below). During the tie, he is releasing prostatic fluid. 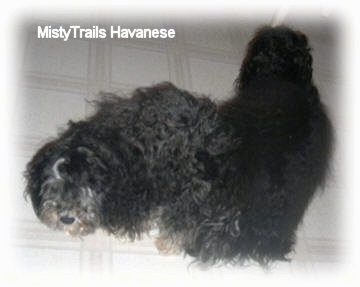 As soon as the dogs lock the male usually moves his leg over her back, turns butt to butt and they remain locked. Tied. 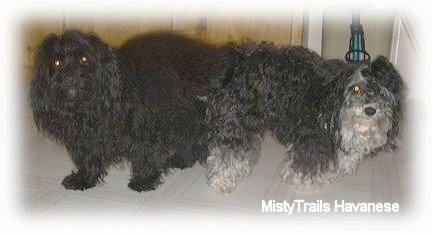 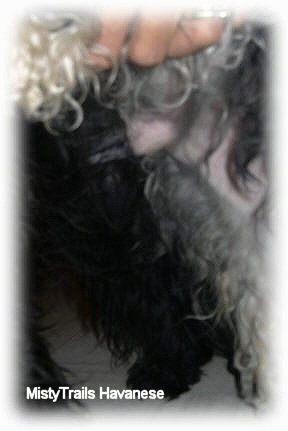 Getting stuck together is normal. Do NOT ice them to get them apart. The male is supposed to swell up and get stuck inside the female for two to 30 minutes. At this time if you feel the sire and dam in this area you will feel pulsating. When you hear someone say they got a 13-minute tie, this means they were locked together for 13 minutes.

Picture of a male penis with a swelled bulbus glands 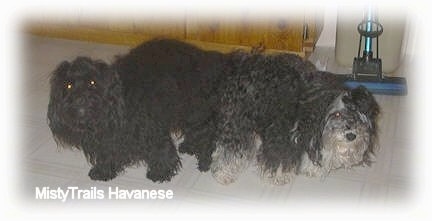 It is advised that you give close supervision and keep them calm. You do not want a larger female getting scared and panicky to swing the male around by his penis, as it will get bruised and may make a repeat breeding failure. Do NOT attempt to separate. Instead, Get ON THE FLOOR and keep them calm. You do not want the female to panic and start squirming. If she is larger than the male she can really hurt the male. He is helpless and will usually stand perfectly still, waiting. The male usually stands calmly; make sure the female does the same. Some females cry in what looks like pain, some desperately want to get free, some just seem to calmly wait.

After a tie, it is good to not let the dam pee for 15 minutes, but MOST important is to check your male, and make sure that his penis has gone back inside of him and is not strangled in hair or stuck out.

"I just did a tie with a new breeder that wanted to watch. Her biggest shock was the young dam’s initial panic; that would have concerned her. But when she saw me get on the floor and calm her and then realized this must be normal as I was so calm, SHE WAS SOOOOOOO glad to see what it is like so she will not panic, as if she panicked, the dogs may also panic." 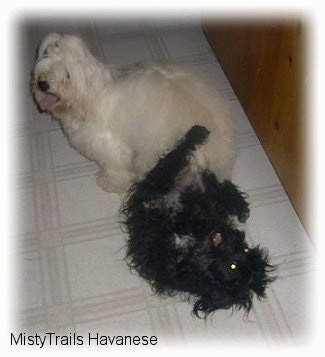 Most dogs stand for a tie and it is important that you do not let the dam roll around or get too frisky and hurt the male, but this particular dam insists on lying on her back.

Unless you KNOW what your pair will do when they are locked, I highly suggest 100% supervision when mating. I only do supervised ties.... 100% supervision.... Accidents can happen.

After the tie they are separated, with their great disapproval, for at least 24 hours to allow his sperm to build back up.

With a younger male (under four years) 20 hours is enough, but with an older male, you may want to increase this time to 30-36 hours.

It is wise to check with your vet. He can draw a sample from the male and check how fertile he is or if he is sterile.

If his sperm level is low, then you must be a little more involved in breed scheduling.

Can a dam that has mated with more than one stud during a single heat have pups from both fathers? 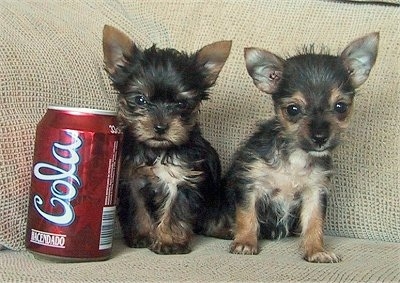 YES, it is the female that will determine the size of a litter.

YES, the stud dog determines the gender of the puppies.

"This litter is the result of a mistake when a Chihuahua male caught a Yorkie female at the beginning of her heat. The Yorkie male mated her as well. In the same litter we have a Chorkie female and a pure Yorkie male! Cute! In the photo they are eight weeks old."