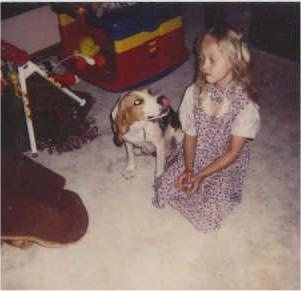 "This is Bugle. Bugle was living with a family that had intended to use her as a hunting dog. She ended up getting pregnant and they took her to the pound. Bugle had her puppies while living in the pound. The policy of this dog pound was to kill any puppies born in their possession. Bugle's puppies were put to sleep, leaving Bugle very sad and depressed. Bugle was rescued from the pound by Dawn Littlefield from Littlefield Kennels. Dawn reported that Bugle was very depressed and was at the point where she was not sure if Bugle would ever recover. Four months later Dawn rescued some puppies. Bugle immediately took to the puppies, caring for them as if they were her own. This snapped her out of her depression. She was adopted out to a family two months later. She now lives a good life with her new family going on camping trips, hiking and playing." 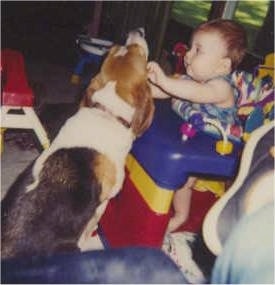 Bugle the Briquet visiting the baby