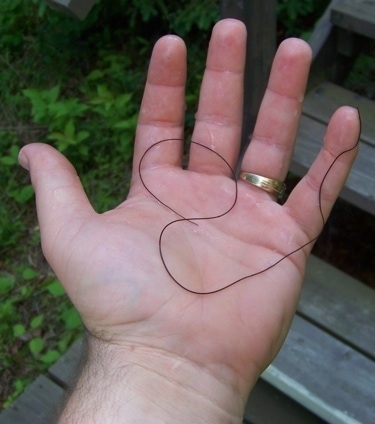 Horsehair worm found in lake Kabekona, Minnesota. "It looks like a piece of string or some thin plant, but it is alive and swims through the water."

Horsehair worms resemble the hair from a horse’s mane and are harmless to humans, animals and plant life.

This parasite needs a host such as crickets, millipedes, water beetles, mantids, carabid beetles or dragonflies. An infected host becomes thirsty and goes to get a drink. While drinking, the worm emerges from the insect’s body and the host often dies. The worm is first yellow/tan in color, and turns brown/black after a period of time. The worm will often twist itself into a ball-type knot.