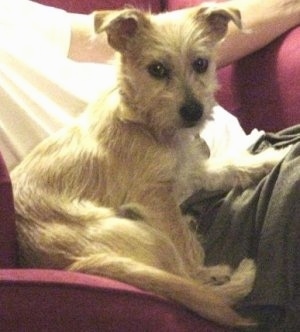 "This is a picture that I took of Foster, my Lhasa Apso / Chihuahua mix. He's about 10 lbs. He's about 7 months old in the picture. He hasn't grown any larger, but has gotten a little furrier at 1 year. He's shy and submissive to the other dogs, but plays very well with them. He isn't a terror like a lot of puppies I've had and is very smart. He's a cuddler and has been very hard to crate train. (He really wants to sleep with my husband and me.) He gets the Chihuahua "shivers" when he is emotional (if I'm handing out treats, leaving, or any event that concerns him). We really like him. He's so cute and fun without being too much to handle."

The Chi Apso is not a purebred dog. It is a cross between the Chihuahua and the Lhasa Apso. The best way to determine the temperament of a mixed breed is to look up all breeds in the cross and know you can get any combination of any of the characteristics found in either breed. Not all of these designer hybrid dogs being bred are 50% purebred to 50% purebred. It is very common for breeders to breed multi-generation crosses. 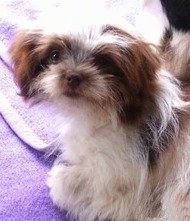 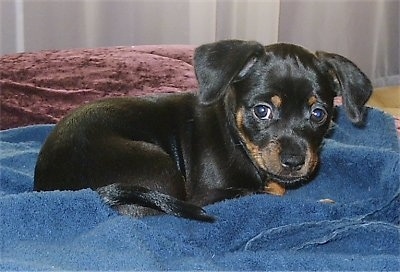 Roxy the Chihuahua x Lhasa Apso mix (Chi Apso) puppy at 9 weeks old—"Roxy keeps company with our 15-year-old Chiweenie, PJ. After chasing her "big bradah" PJ all over the house, Roxy gets ready for a nap."