Lately one of Spencer and Bruno's pack walking friends has not been able to join them in their walks through the local town. Here is Maggie's story...

Over the summer Maggie injured her left hind leg while running on a dog beach. She limped around for a few days, but we weren't too concerned. Over the next couple weeks, she would sometimes put weight on it and walk normally, and other times hold it completely off the ground. If she saw a squirrel in the yard, she would run and use her leg, but then limp afterwards. After about a month of no improvement, we decided to take her to the vet. At that point he thought there was a chance that it was a partially torn ACL, or just a soft-tissue injury. He recommended we watch it for a couple weeks, making her rest as much as possible. We talked about the ACL surgery and what it involved, and we were holding out hope that she wouldn't need it. Over the next month, it became clear that she wasn't getting any better. She would sometimes use her leg while walking, but we could see that she preferred to keep it off the ground and would even sit differently to avoid using it while sitting or getting up. She was losing muscle tone in her bad leg, and we didn't want to risk more stress on her good leg. With a heavy heart, we took her back to the vet. The ACL was definitely partially torn. We scheduled the surgery. 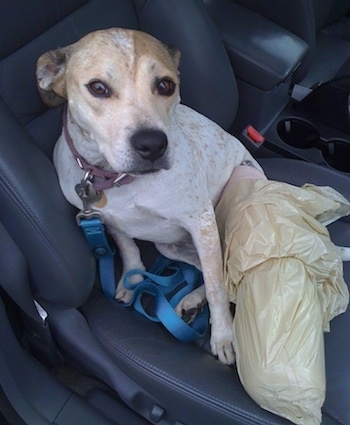 Maggie on the way home from the vet after her operation. We dropped her off on Tuesday morning, and a couple hours later the vet called to say everything went well. She would stay overnight, and we could pick her up the next morning. When I picked her up, they gave instructions on antibiotics to give twice daily, and pain medicine once a day. Her leg is covered in a soft cast so the vet gave us instructions on keeping it dry. At home, Darley, her Beagle mix sister, gave her a few sniffs and some wags and that was it. 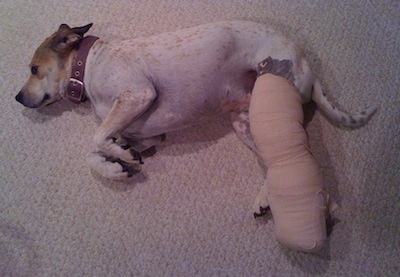 The first night home was pretty uneventful, since she still had anesthetic in her system. She was able to go to the bathroom outside, although it was lucky we covered her cast in plastic because she would accidentally step in her business without realizing it! Her appetite is fine and she is content receiving lots of belly rubs. We're limiting her to our den and put baby gates up to keep her from the stairs. She can walk on it, but if she goes outside we have to walk her on a leash. 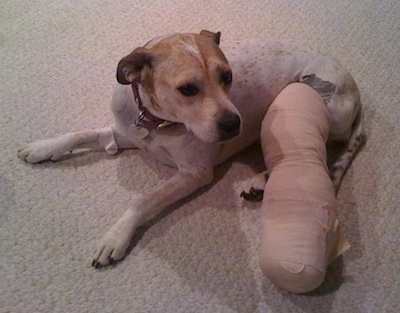 In about a week she'll have her cast checked for slippage to make sure it isn't sliding down her leg. They'll also check to make sure no moisture has gotten in the cast. If all goes well the cast will come off in 10-14 days. After the cast comes of the vet wants her using the leg but not overuse it. So, we'll be doing lots of short walks. 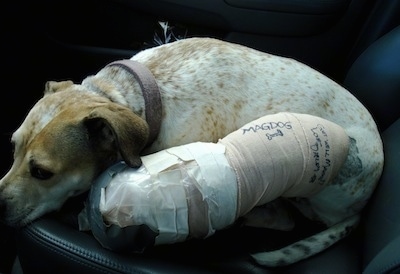 One week after her surgery Maggie had a cast checkup to see how her leg was doing and to check for cast slippage and moisture. To protect her cast from dew, we had cut the bottom out of a Ziploc bag and attached it to the bottom of her cast, reinforcing it with duct tape. It helped keep the moisture out and gave us the option of just taking it off it got too dirty, wet, or worn. Her checkup went well and the vet told us her cast could be removed that Friday, ten days after her surgery. 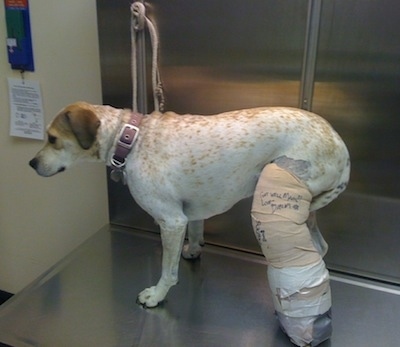 After ten days Maggie gets her cast taken off. 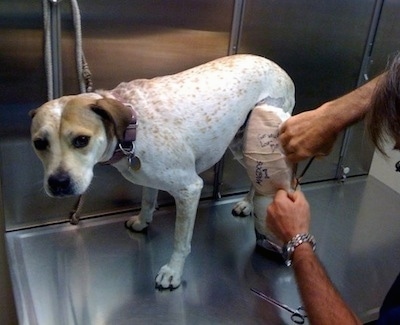 Since it was a soft cast, removing it only required a pair of scissors and some unwrapping. 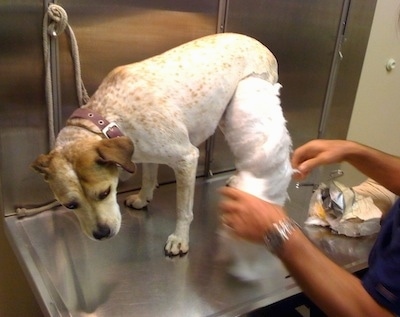 The vet removed the stitches and Maggie didn't seem to mind. Afterwards, her leg was cleaned and she was ready to leave with a few post-surgery instructions. 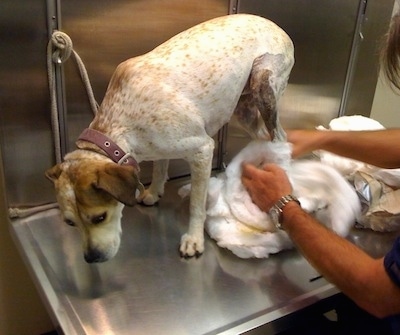 Basically, Maggie's activity should be limited by a leash for at least the next six weeks. She should not be allowed to run free in the yard or go up and down steps unnecessarily. We can walk her for short distances (300 or 400 feet at a time.) The vet assured us that it would be very difficult for her to damage the work he had done, but warned us that if she overexerted herself she would be very sore and in pain the next day, just like a human. The biggest challenge over the next few weeks is to get Maggie to realize that her leg still works. Many dogs continue to limp after the surgery because it became a habit and they do not trust the leg. 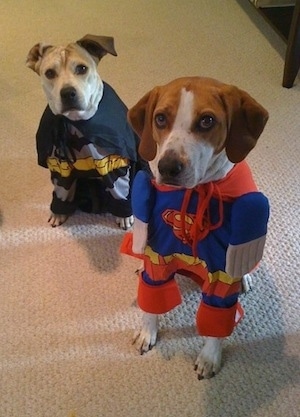 This Halloween costume picture was taken the day after Maggie had her cast removed. She seems comfortable and uses her leg for walking or standing about 50% of the time. She has another checkup in two weeks.