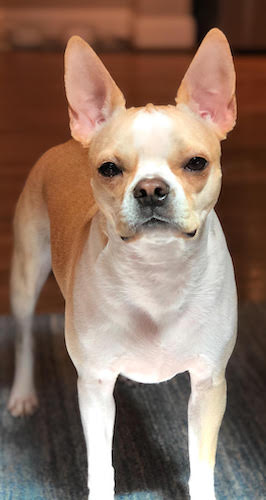 When we first met Dixie, my cream-colored Boston Terrier, she was the biggest puppy in the litter. All of the pups were so cute and I thought we were going to have a tough time choosing one. Instead it was quite easy as she kept pushing and shoving her way over her litter mates to us, then would not leave our side. She has been such a wonderful addition to our family. When she isn't patrolling the yard or lounging in the sun, she is playing with her toys.

We almost lost Dixie in November 2018. We bought her some smaller tennis ball type toys. Because they were made specifically for dogs we were not overly concerned about her tearing them apart, because again, they were specifically made for dogs. I purchased these toys a day or two before her symptoms began. She tore through two of the smaller tennis balls quickly, so I threw them all away. Later that night I saw that her “tennis balls on a rope” (I don’t know the specific name) was shredded as she chewed through the rope and torn off one of the balls. I couldn’t find all the pieces, but the surgeon did! 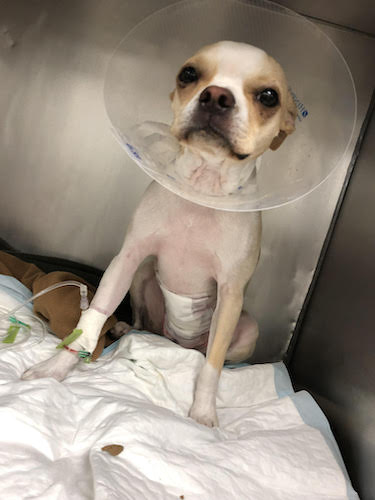 On the night of the 17th, she started spitting up a little but she did this from time-to-time after eating and playing too much. This however was a little foamy. Since she was still active and seemingly happy, I cleaned up a few spots and all seemed fine.

The next morning, she wasn’t very active and began spitting up again. Also, when cleaning up one of the spots I noticed that some of it was pink, which I thought was blood. Immediately put the paper towels in a container and took her straight to the local vet. I told them what happened and gave them the container with the paper towels with discharge and what I thought was blood. They did some tests, including an xray and said she was probably sick from eating something that didn’t agree with her (which was def true) and that nothing was showing on the xray. They were not too concerned about the discharge. This didn’t sit well with me but hey, I’m not a vet so we went home and I watched her very closely.

Over the next few hours she just looked terrible and wouldn’t eat. Then she started drinking a lot of water and I noticed that almost immediately or maybe a minute after she drank, she would throw it all up. At this point she hadn’t eaten so she was basically just throwing up the water she just drank. It was like she couldn’t keep it down because something was blocking it. After 2-3 times of doing this, I knew the vet had missed something. So I took her to an Animal Hospital who has a 24-hour emergency room.

When I described her symptoms...

It’s like the vet immediately knew what was going on. She told me they would likely have to do surgery immediately, but that they needed to do some imaging before they would know for sure. I told her that the previous doc did xrays, but according to the ER doc, the blockage would not have shown up on an xray which is why they missed it.

The doc told me to spend some time with her before I left because she was in bad shape and the outcome was not guaranteed additionally, they were going to have to call in a special surgeon to do this particular operation. She also let me know that this wasn’t going to be cheap (and she was right). They basically had to pull out her intestines to remove the debris and also ensure nothing was lodged elsewhere.

Dixie had to have a Gastronomy/Enterotomy (multiple) for linear foreign body removal. She went into surgery overnight of November 18-19th and was discharged on Nov. 21st. They had to cut down the length of her stomach and remove her entire intestinal track to remove debris and ensure there was nothing lurking anywhere else.

They operated that night and she was discharged two days later.

It is important to note that when your pet has gotten to this point, surgery is unavoidable. Also, tennis balls and string are not visible on xrays so more advanced (and expensive) imaging is needed. 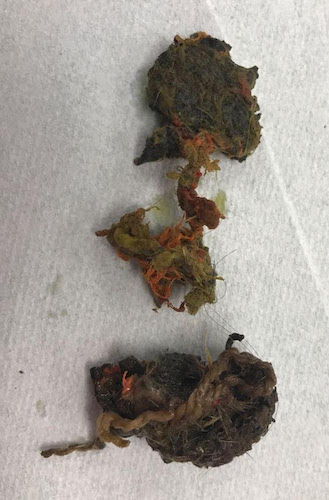 The debris taken out of Dixie's belly. You can see the rubber and curve of the small tennis balls and the rope fragments.

Dixie had a steady stream of 5 medications, including one that had to be mixed and administered overnight (around 2-3 am). As we transitioned her from fentanyl IV to her codeine, she acted nervous and lethargic but I was told this would be pretty normal. She had to stay in a confined area and not engage in really any activity. Her pain meds kept her pretty drugged so this wasn’t too much of a problem. She wore a cone for 3 weeks.

After about 2 weeks, she began getting restless so the vet said I could transition her out of the cage. She was ecstatic and it was really hard keeping her calm at this point. She wasn’t in pain and was ready to play. I couldn’t believe how quickly she recovered. 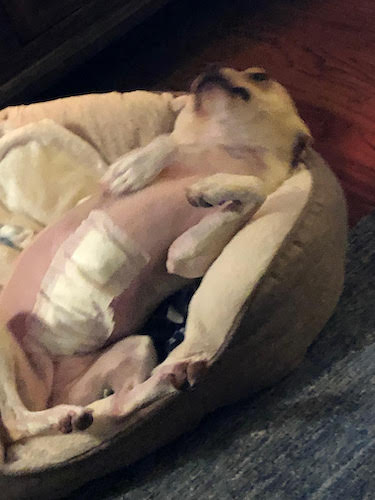 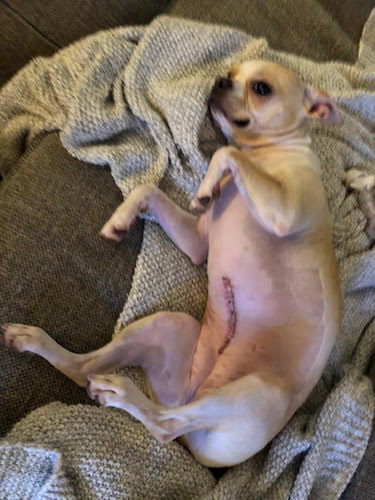 Dixie resting at home after surgery 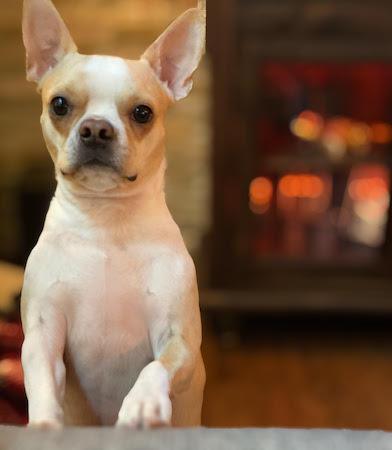 She made a full recovery, but it cost us almost $8,000. We are very careful about what we give her.

Just because a toy is made specificly for a dog does not mean it is safe. A lot of dog toys contain benzene, along with other unsafe chemicals. Always do your own research before giving toys to your dog.