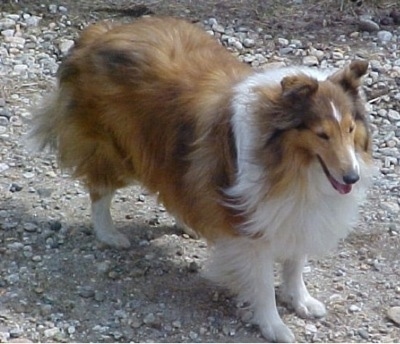 "Simba, our adult female Rough Collie in our backyard."

It all started in December 1938 when Eric Knight wrote a short story for the Saturday Evening Post called "Lassie Come Home". This was the start of a great classic that thousands have, and still do enjoy, the story of a Rough Collie named Lassie with human-like intelligence, and his amazing adventures. Not only were there Lassie books, but movies, a radio show, a television show and even a cartoon. In October 1943 "Lassie Come Home" was released in theatres staring Elizabeth Taylor, Roddy McDowell and of course Lassie. Many other movies were made as well. The Lassie radio show was broadcast from 1947 to 1950, first on the ABC radio network, then on NBC. Each week Lassie played a different dog in a different situations in 15-minute stories. The original Lassie TV episodes ran from 1954-1962. In 1973 the cartoon "Lassie's Rescue Rangers" premiered on CBS. In 1997 Lassie premiered in a new series on the Discovery Channel’s Animal Planet.

All six of the Collies that played the role of Lassie were males. Why? Because male Collies have thicker coats and retained their fullness more than the females during shedding season. Lassie was a female role and even supposedly had puppies a few times.

It was not until 1957 that the "Timmy" character joined the Lassie TV show. Before that date Timmy did not exist in any of the movies, radio show or TV shows.

According to the novel "Lassie Come Home" by Eric Knight, Lassie was described as "a beautiful tricolor collie." This means that the original Collie looked something like this... 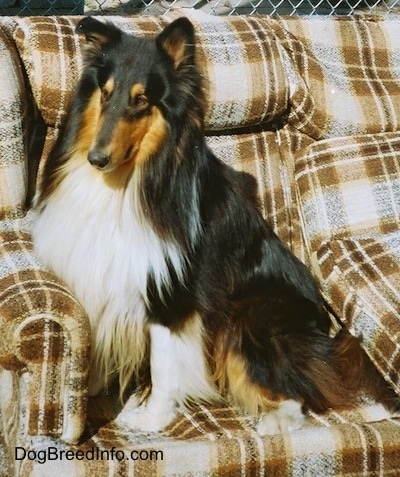 The dog was also described as having a "perfect black mask," which means it had no blaze.