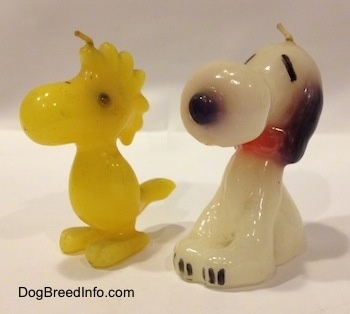 This is a wax candle of Snoopy and his friend Woodstock. This little candle set was given to my husband as a gift in the 1970s. Amazingly enough it's in excellent condition. I can't even find any scratches in the wax. They are both about 3 inches tall from the ground to the top of the wick. Snoopy's head is three inches long from the back of the head to his nose and about 1 1/4 inch wide from ear to ear. Woodstock is 2 1/4 inches long from the back of the tail to the front of the beak and 1 inch wide across the front of the chest.

Talk about a classic... Some things are fads, very popular for a while then they disappear as fast as they appeared. But, Snoopy—now that's a classic that will never die. This black-and-white Beagle who has charmed people around the world for more than 50 years is here to stay.

Snoopy is a Beagle who stars as Charlie Brown's dog in the classic "Charlie Brown and the Peanuts". Charlie Brown is a bald-headed little boy who adopts a puppy from the Daisy-Hill Puppy Farm. But Snoopy is no ordinary dog. He is often seen flying his World War II Flying Ace dog house and his best friend is a little yellow bird named Woodstock. Snoopy, who sometimes appears to be more human than dog, is one dog with a definite mind of his own.

Q: Who is the creator of Charlie Brown and the Peanuts?
A: Charles Schulz, who for nearly 50 years single-handedly designed, researched, wrote and drew every panel and strip that appear in daily and Sunday newspapers around the world.

Q: Where did Charles Schulz go to art school?
A:  Charles Schulz took a correspondence course in cartooning at what is now the Art Instruction Schools, Inc., in Minneapolis, MN.

Q: What was Schulz like in school?
A:  Charles Schulz was a shy and insecure student struggling through the program, submitting his coursework by mail instead of in person and earning only a C+ in "Drawing of Children."

Q: What obstacle got in the way after Schulz completed art school?
A: Unfortunately, after completing art school Schulz was drafted into World War II before successfully selling any of his cartoons. Within days of his induction into the military, Schulz's mother passed away of cancer.

Q: What military position did Schulz hold?
A: Schulz was a staff sergeant and the leader of a machine-gun squad.

Q: Who did Charles Schulz name the charter Charlie Brown after?
A: Schulz took on a second job as a teacher with his alma mater, Art Instruction Schools. It was there he met a friend who inspired him in his future work, a friend named Charlie Brown, as well as a girl with red hair who broke his heart. Schulz went on to land a weekly comic feature called "L'il Folks" in the St. Paul Pioneer Press. The fruit of his creativity and labor, "L'il Folks" featured Charlie Brown and Shermy and became the sole focus of Schulz's career.

Q: With whom did Charles Schulz sign his first 5-year contract, starting his career as a full-time cartoonist?
A: Schulz signed a five-year contract with United Feature Syndicate, New York City.

Q: What obstacle did Schulz have to face with is new contract with United Feature Syndicate?
A: Syndicate's first major decision, because of legal issues surrounding the name "L'il Folks" ("Little Folks" and "L'il Abner" already existed), the strip was renamed "PEANUTS". 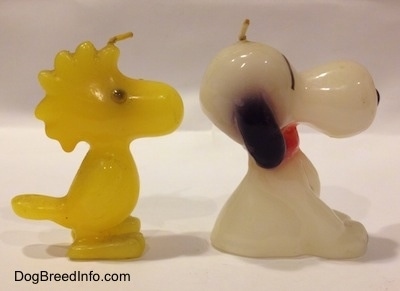 Q:  In what year did Charles Schulz die?
A: Charles Schulz died on February 12, 2000, in SantaRosa, California, of complications due to colon cancer. He was 77 years old at the time. It was only hours before his last original PEANUTS strip was to appear in Sunday newspapers.