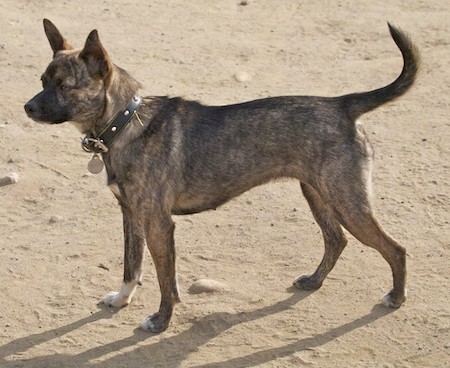 Sakoda the American Eskimo / Pit Bull Terrier mix at 1 year old—"Sakoda is the product of a 55 pound Brindle Pit Bull male (Cody) and a 10 pound white fluffy American Eskimo Dog mom (Sadie). Both dogs are purebred but got together somehow. Hence Sakoda's name, a combination of the two."

The Eskimo Pit is not a purebred dog. It is a cross between the American Eskimo and the Pit Bull Terrier. The best way to determine the temperament of a mixed breed is to look up all breeds in the cross and know you can get any combination of any of the characteristics found in either breed. Not all of these designer hybrid dogs being bred are 50% purebred to 50% purebred. It is very common for breeders to breed multi-generation crosses. 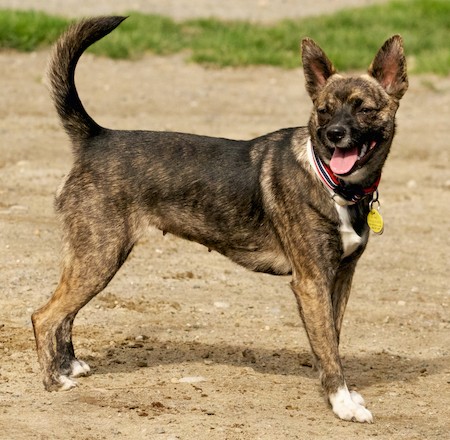 Sakoda the American Eskimo / Pit Bull Terrier mix at 1 year old—"Sakoda has no fear, but does give me, as pack alpha male, respect, and is very obedient. She is presently being trained away from her habit of barking at any noise or movement outside of our property, even in the middle of the night."

Sakoda the American Eskimo / Pit Bull Terrier mix at 1 year old with Alornerk the Canaan Dog and Siutik the mix breed dog—"Sakoda joined me when a neighbor family had to give her up. She is one year old in these photos. I had been taking her to the leash free dog park for several months before I was given ownership. She was already friends with my other two dogs, Alornerk, a four year old Canaan Dog, and Siutik, a 3 year old mix whose color matches Alornerk's, but not much else." 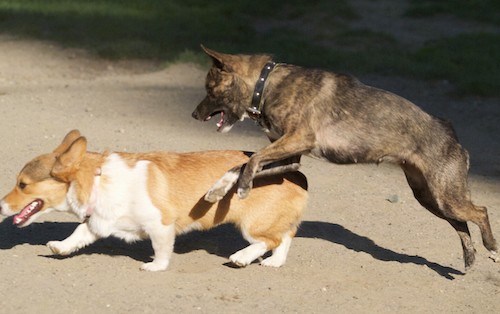 "She plays with all the dogs at the park, being as rough as they let her be. She likes to grab a mouthful of neck skin and hang on. She is very strong for her 19.2 pounds, and can outrun and certainly outmaneuver all breeds at our park. It's funny to see her leading a pack of many dogs to one end of the park at breakneck speed, then see her heading back while all the rest are still trying to get turned around." 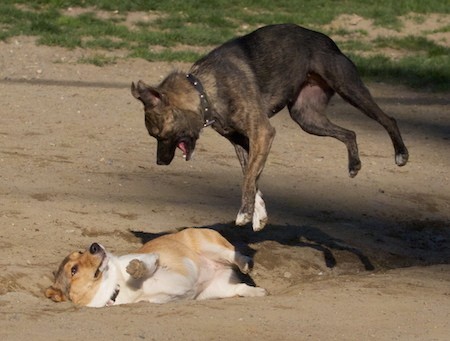