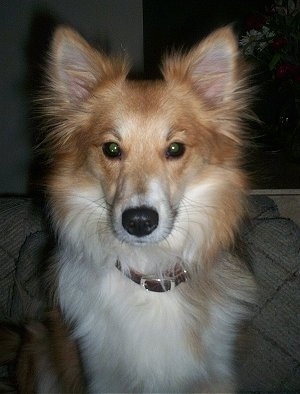 "Shelby is a Sheltie / American Eskimo mix, shown here at about 2 years of age. She is a very sweet dog and is almost attached by the hip to me 24/7. Sometimes it seems she has separation anxiety, as she becomes somewhat neurotic when I leave her. She is also a bit timid around strangers; she will shy away sometimes when people reach down to pet her. She's also very smart! I taught her to sit, shake, high five, stay and lie down when she was about 6 months old and it took very little time for her to catch on. She responds to both verbal commands and hand gestures. She loves the snow. She also loves to fetch and almost play soccer! When she catches things I've tossed to her she seems to use her front paws to assist in her catch in case the object misses her mouth. She usually sleeps in my bed every night although sometimes she will sleep in her crate which I folded an old comforter into that she chewed up as a pup. She obeys commands such as "go get it" (ball/toy) and will also go find a toy when I say "where's your toy?" She loves to play. I live in an apartment and when I cannot make it home in time for potty walks, she has been trained to go on some newspaper on my balcony."

The Eskland is not a purebred dog. It is a cross between the American Eskimo and the Shetland Sheepdog. The best way to determine the temperament of a mixed breed is to look up all breeds in the cross and know you can get any combination of any of the characteristics found in either breed. Not all of these designer hybrid dogs being bred are 50% purebred to 50% purebred. It is very common for breeders to breed multi-generation crosses. 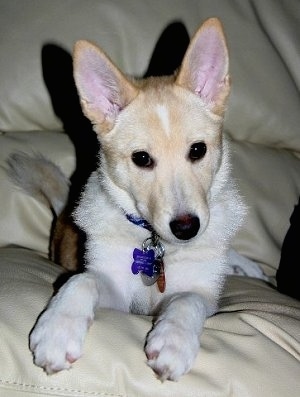 Sasha the Eskland at about 10 months old (American Eskimo / Sheltie mix)—"She is the very essence of the mix, very owner-oriented, very social with other dogs, very high energy, and very adorable" 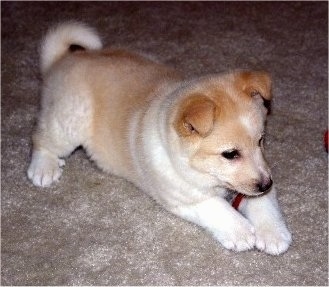 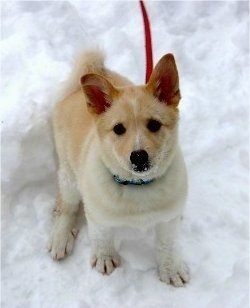 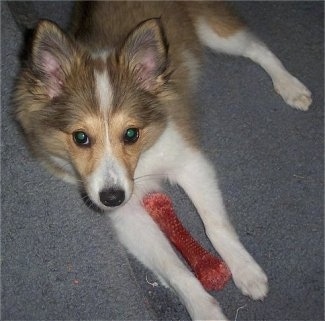 Kaylee the Eskland (American Eskimo / Sheltie mix breed) as a puppy at 16 weeks old with her chewy bone. 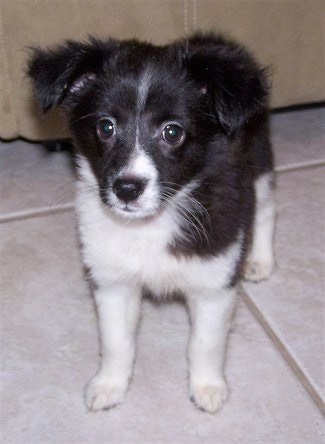 This is Nikki, an Eskland (American Eskimo / Shetland Sheepdog mix) at about 10 weeks old. Her owner says, "She is full of energy and quite feisty with our older dog, a full-bred American Eskimo. She is very smart and learns easily when motivated by food. I would recommend this cross as long as you have the time to invest."

See more examples of the Eskland