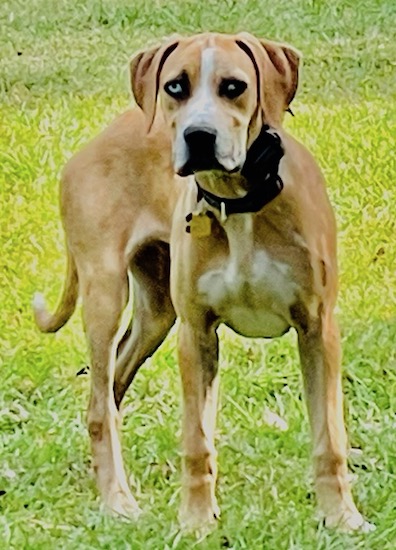 "Tucker the Florida Cur, the Florida Cracker dog. He is a wonderful Cur. He is only 6 months old and weighs 45 pounds. Tucker is named after the dog in A Land Remembered, a history of Florida."

The Florida Cracker Cur is not bred for looks, but for its working ability.

This is not a submissive, easygoing dog. With the toughness and courage to confront a very angry, very large cat, these Curs have learned to be decisive and dauntless. Usually silent on the trail, they make consistent guard dogs, but certainly are not ideal for suburbia, where there is no call to work. Trailing ability varies with strains, but they have enough nose to follow game and many carry treeing ability. Some lines are bred for tree dogs and others for baying. This very tough large-game, raccoon and squirrel hunter is willing to face a squealing razorback or an angry wildcat when it is cornered. It has a strong desire to please its master. Very protective of the property and family; without an owner who is more dominant than itself, it can become over-protective. The Florida Cracker Cur is noted for his courage. This hunting dog will catch a mad bull head-on in the nose and will hold his ground even against a bear when threatened. The objective in training this dog is to achieve pack leader status. It is a natural instinct for a dog to have an order in its pack. When we humans live with dogs, we become their pack. The entire pack cooperates under a single leader. Lines are clearly defined and rules are set. Because a dog communicates his displeasure with growling and eventually biting, all other humans MUST be higher up in the order than the dog. The humans must be the ones making the decisions, not the dogs. That is the only way your relationship with your dog can be a complete success.

The Florida Cracker Cur is not recommended for apartment life. It is bred for work and will be happiest with a job to do.

When it is not out on a job, this breed needs to be taken on a daily long walk or jog.

The short hair of this Cur is easy to groom. Occasionally comb and brush to remove dead and loose hair. Bathe only when necessary as bathing can dry out the skin, causing skin problems. Keep the ear canal free of excess hair and the toenails clipped.

Originating from Florida, this is a true working dog. The Florida Cracker Cur dog is not bred for looks, but its working ability. It is usually larger and heavier-boned than most other curs, adapted to swamplands and used as cow and hog dogs. It works side-by-side with its cowboys. Many cowboys state, "A well trained cowdog is worth the work of several cowmen." The first stock dogs were brought to Florida by Hernando de Soto in 1539. These dogs were used to round up cattle. When a cow escaped, it was the dog’s job to round the cattle back up and move it back with the rest of the herd. Some dogs would hold a cow by the nose, ear or leg until the cow was roped and branded; these were called "Catch Dogs." When the dogs were not out working with their cowboys, they were used as watch and guard dogs for the family at home. They played a big part in the lives of ranchers. 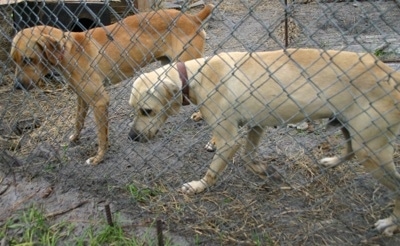 "A Florida Cracker Cur is one tough dog. In Florida, this dog is a cattle and hog dog used in herding cattle in the blazing heat of the tropics working dusk to dawn with its cowboy. They have an excellent temper, very loyal to the farm and their work. Cracker curs have become very rare—with the loss of land and cattle industry, the need for a cow dog has declined. I have one myself from a 70-year-old cowboy. His female, the mom, is one of his best dogs in all his years, so I am submitting this pic of them; they are red and a yeller dog. Yellow to me, but that's what they say, a yeller dog.... The dogs range from 30 females to 40 males."