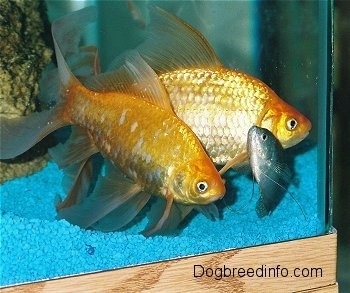 Two goldfish and one kissing fish

Mid-dweller, but does visit all levels.

Peaceful schooling fish. Messy, produces a lot of waste. Should have some type of extra aeration, as they have high oxygen requirements. Makes a great bottom scavenger. May up-root plants.

Gets along well with other non-aggressive fish. Does best with other goldfish, but can live with other peaceful fish species. Goldfish put off a lot of ammonia. While goldfish can handle a higher level of ammonia, this level can kill other types of fish and must be taken out of the water. If you are going to keep goldfish with other fish species, be sure to monitor your ammonia levels. Goldfish do not like ammonia and prefer a clean, filtered tank. Great social, community fish, however, since they prefer colder temperatures, they do best with other goldfish that can also live in these cooler temps.

Likes to eat live plants, so fake plants are ideal if you do not want your plants eaten. Gentle circulation. While they can live in a small bowl they do best with a larger aquarium with a filter system. They do not need a heater in an indoor aquarium.

Considered a cold-water fish. Ideally they like 50° - 70° F (10° - 21° C). A goldfish can live in waters just above freezing. There are many goldfish that live in outside ponds, and so long as the water does not freeze, they can survive the winter. They do not particularly like tropical temperatures, and will not be as healthy, but they can survive.

Omnivore (animals that eat both meat and vegetables). Flake foods (green flakes), Does best on a special goldfish diet, which can be purchased at your local pet store. They do not tolerate tropical fish food very well, as they do not have stomachs. Their food is absorbed as it travels through their intestines. Goldfish food has a higher alkaline content than tropical fish food. Feed flake foods every day and give brine shrimp (either live or frozen), tubifex worms, blood worms and daphnia only as a treat. Freeze-dried foods are recommended over live foods to avoid introducing bacteria and parasites into the tank.

The most common cause of death in goldfish is overfeeding. Their colors depend on the environment they are raised. For example, pond and river goldfish are usually duller in color than the goldfish raised in a bright fish tank. 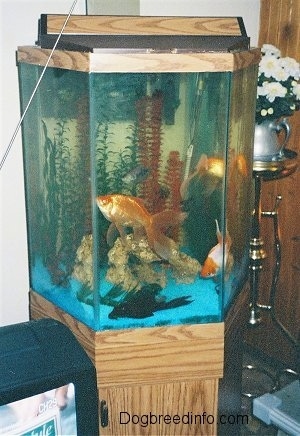 Three goldfish and a pleco, which is an algae eater. The pleco is the black fish on the bottom of the tank.