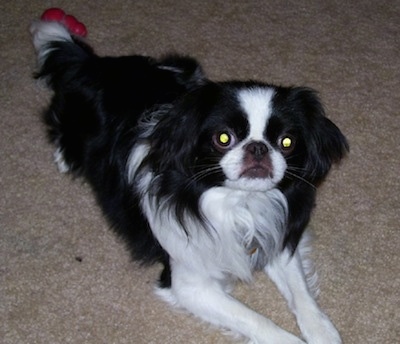 "This is Niko. He is 1 1/2 years old in this picture. He is a true class clown. He is always making me and my friends laugh and keeps us wondering why he does his crazy things."

The Japanese Chin is also called the Chin or Japanese Spaniel. It is a little spaniel whose only bred purpose is to serve man as a companion. The Chin has a large, broad head, large wide-set eyes, and a short, broad muzzle. The ears are small, V-shaped, set wide apart and slightly below the crown of the skull, and well covered with hair. The forehead is quite round. The stop is deep and the muzzle is short and broad. The nose is wide with an extremely short nasal canal. The nose is black in black and white dogs, and in other colored dogs the nose color should match the color of the coat markings. Eyes are set wide apart, large, round, and dark in color. The eyes are set well in, but should not be deep set. It is when the eyes protrude that they are so easily injured. The bite is slightly undershot. The body height and length are about the same. The front legs are straight and fine boned, with the elbows set close to the body. The tail is set high and carried arched up over the back, hanging to either side of the dog with feathering. The coat is white with colored patches. The patches are often black, but can also be red, lemon, orange, sable, black and white with tan points, or brindle.

The Japanese Chin is a charming, lively, and happy animal. It is pleasant, loving, intelligent, affectionate and extremely devoted to its master. This breed loves everyone it is familiar with, but is known to be reserved around strangers and in unfamiliar situations; socialize this dog well. If you do have small children, teach them to be nice and gentle with the dog. The Chin is good with other dogs and pets. The Japanese Chin has a mind of its own and likes to be the center of attention. This breed is not a barker. It is mild mannered, graceful, yet playful. Sensitive, agile, dainty and clean. So long as you set rules the dog needs to follow, limits to what he is allowed to do, providing consistent leadership, the Chin will be obedient. Chins also make good watchdogs. The Japanese Chin can be taught to perform tricks. Be sure to be this dog's pack leader. Do not allow the dog to develop Small Dog Syndrome, human induced behaviors where the dogs believe they are pack leaders to humans. Chins who are allowed to be pack leaders to humans will develop all types of varying degrees of behavior problems, including, but not limited to, separation anxiety, snapping, growling and guarding, and will not be trusted with children.

There are two classes of Japanese Chins: under 7 pounds, and over 7 pounds.

Prone to respiratory problems, heat prostration and distemper. Tend to wheeze and snore. Also prone to eye issues. When planning a breeding dogs with protruding eyes should not be acceptable. A puppy buyer needs to be aware that a buggy-eyed puppy is more prone to issues and to be prepared for that.

The Japanese Chin is a good dog for apartment life. They are moderately active indoors and will do okay without a yard. This breed is somewhat sensitive to temperature extremes.

Chins do not require a great deal of exercise, however they do need to be taken on a daily walk. They will enjoy the opportunity to play in an open yard.

An average of under 10 years.

A few minutes each day will keep the coat looking beautiful. Comb out tangles and brush lightly, lifting the hair to leave it standing out a little. Clean the eyes every day and check the ears regularly for any signs of infection. Dry shampoo occasionally and bathe only when necessary. This breed is an average shedder.

Originally called the Japanese Spaniel, and still called that name by some clubs, the Japanese Spaniel was renamed "Japanese Chin" by the AKC in 1977. The Japanese Chin is first and foremost bred as a companion dog. Despite the name "Japanese" the breed is native to the land of China. It was later developed in Japan and introduced to Europe in 1700. It became a favorite of Japanese nobility, and was often offered as a royal gift to diplomats and to foreigners who rendered some outstanding service to Japan. In 1853 a pair was given as a gift to Queen Victoria from Commodore Perry when he returned from his historic mission to open Japan to world trade. 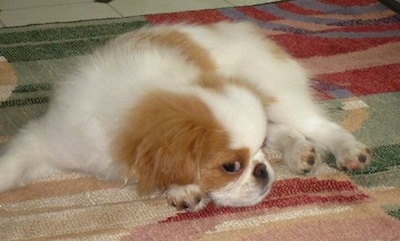 "This is Akira. He is not quite 1 year old in this picture, but he is the smartest dog I've ever owned. He is very vocal when he wants to play or go to the bathroom. Here he is taking a nap in the sun." 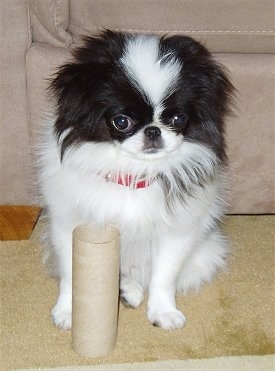 Mochi the Japanese Chin is a beautiful little guy from Germany that is very playful, loves to go on jogs, and is always full of surprises. 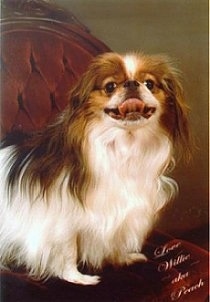 This is 4-year-old Willy. 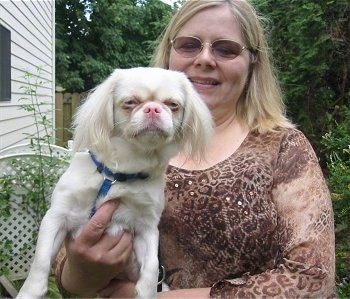 "Abby, my albino Japanese Chin—I believe Abby and I resemble each other." 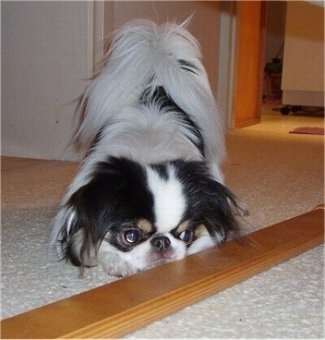 Astroboy the Japanese Chin—his owner says, "He has a comical but caring personality. In this picture he is trying to sneak up on me."

"This is Tiger. He loves to bow to me before he comes in from outside. He does it every time." 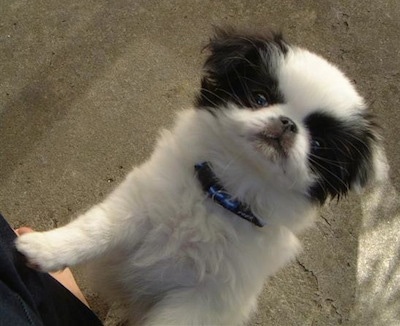 "This is my Japanese Chin named Zorro (because of his mask-like face). We live in New Zealand. I think he looks quite like Gizmo on your page already! He is 10 weeks in the pictures." 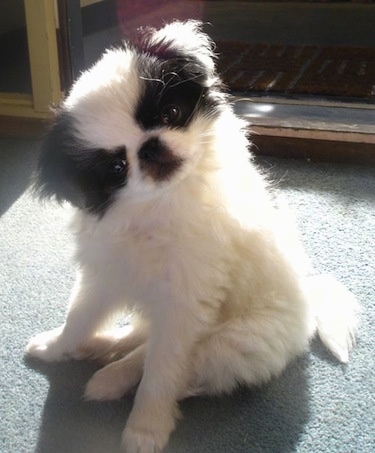 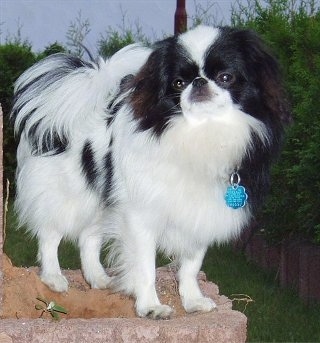