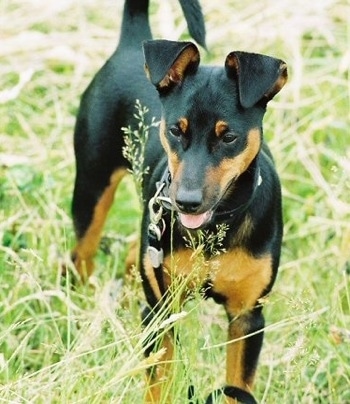 "This is Sadie, a Toy Manchester Terrier. In England it is illegal to dock ears and tails, hence the reason she has a long tail and floppy ears."

There are two varieties of the Manchester Terrier: Toy and Standard. The body of the Manchester Terrier is smooth, compact and muscular. The head is tight skinned, long and narrow, almost flat with a slight indentation up the forehead and a light stop that is visible when viewing the dog from the side. The head is long and tapering. When the ears are kept natural they are V-shaped, semi-erect and have a front flap that folds over. In the Toy variety, the ears are usually naturally erect. When they are cropped they are long and pointed. Note: it is illegal to crop ears in most of Europe. The small eyes are dark, nearly black and almond-shaped. The nose is black. The teeth should form a scissors or level bite. The tail is thicker at the base and tapers to a point. The smooth, short, dense coat is tight and comes in black and tan with distinct starting and stopping points; not blended.

The Manchester Terrier is a high-spirited, powerful, agile, very intelligent, cunning dog which is eager to learn. It displays the true terrier nature, is independent and faithful. Extremely lively, sporty, alert, keen and vigilant. Discerning and devoted, it is loyal and a good friend to its master. The Manchester Terrier likes to please its handler and learns quite quickly. These dogs can be outstanding in activities like agility skills and catch and also do well in obedience trials. They thrive on attention from their owners, and need leadership from their humans. Without enough exercise, mental stimulation, and/or if the dog is allowed to be pack leader to the humans, they can get upset when left alone. becoming bored, hyper, destructive, and barking excessively. Pack leaders are allowed to leave the followers, however, followers are not allowed to leave the pack leaders. They very much do enjoy being with their people, and should be taken for a pack walk before they are left for long periods of time to put them in an instinctual rest mode. The Manchester Terrier should be thoroughly socialized when it is young, and be around humans who display leadership towards the dog, along with rules, boundaries and limitations for the dog to follow, to prevent potential aggression. This breed needs thorough, firm training.A lack of human leadership can result in them becoming demanding, headstrong, protective, snappish and/or aggressive. Manchester Terriers should not be trusted with other small non-canine animals, as the hunting instinct in them is strong. They should be introduced to children as young pups and children should be taught how to display leadership toward dogs. Well-balanced Manchester Terriers that have owners who do not let them develop small dog syndrome, human induced behaviors where the dog believes he is pack leader to humans, will not display these negative behaviors. If given what they need as a canine animal, they are wonderful family companions.

Some lines are prone to a blood problem called glaucoma. Also some are prone to a bleeding disorder called Von Willebrand's disease, but this is rare and wounds heal quickly. If left out in the sun for long periods, heat bumps may appear along its back.

The Manchester Terrier demands plenty of exercise. In addition to the normal daily walks, let it run and play off the leash regularly. These dogs can run very fast and keep the speed up for a long time. This dog greatly enjoys exercising by running alongside a bicycle, provided the amount of exercise is built up gradually. Do not allow this breed off the leash except in a secure area unless it has been trained, as he likes to chase.

The short, shiny black and tan coat is easy to care for, requiring almost no grooming. This is an easy-care breed. The Manchester Terrier is an average shedder, while the Toy Manchester Terrier sheds little to no hair. Keep the ear passages clean and the claws short.

The Manchester Terrier is the oldest known terrier breed. Developed as a rat hunter in nineteenth century Manchester, England by a man named John Hulme, it has earned the nickname of "rat terrier" because of its tenacity at catching rats and mice. It is considered to be the best vermin hunting breed. In a British contest one Manchester named Billy was said to have killed 100 rats in only 6 minutes and 13 seconds. The Manchester Terrier was developed by crossing the Black and Tan Terrier and the Whippet. There are two types of Manchester Terrier: Standard and Toy. The Toy variety became popular during the reign of Queen Victoria, when smaller dogs were very popular. The Standard Manchester still retains the ability to be a prized ratter, but the breed as a whole is a companion dog. The Manchester Terrier has gone down in popularity. The Manchester Terrier was used in the development of several breeds, among them the Doberman Pinscher, and the Airedale Terrier. 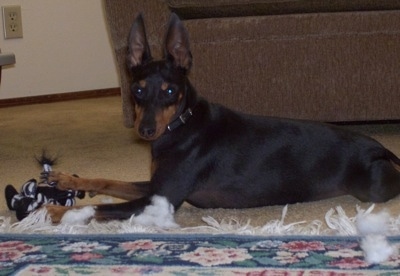 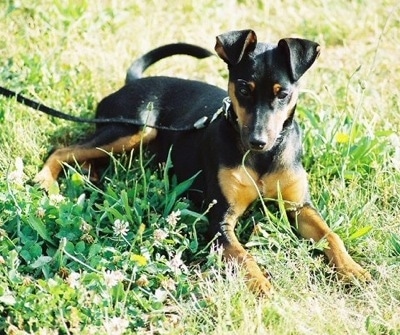 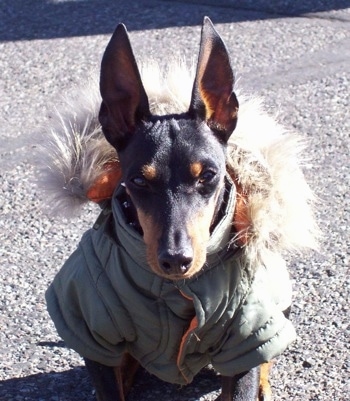 "This is my Toy Manchester Terrier Starlette. She loves to go on walks and runs daily, preferably off leash. She has killed several small animals including a rabbit, bird, and mouse. She likes to attack and play within the house. She knows many tricks, including downward dog yoga pose, ballerina dance, high-five and "get low" (dancing to the Flo Rida song), plus all the basic commands. She loves car rides even if it's just moving the car to the driveway from the garage. She doesn't like cold weather at all! She sleeps in her bed with a fleece blanket and a heating pad, but usually joins her owner under the covers in the middle of the night. She is usually in clothes too, which she helps you put on because she knows they keep her warm. She sun bathes as much as she can, even poolside with her mom. She is always the favorite anywhere she goes, especially once she starts doing tricks." 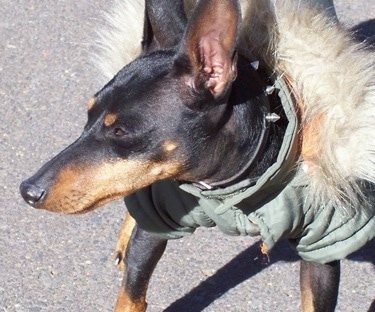 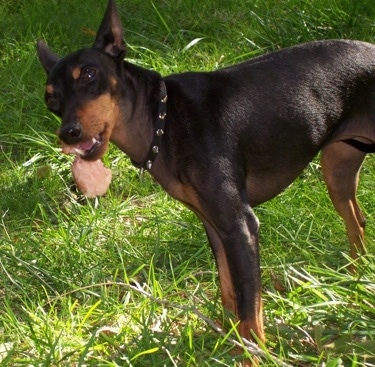 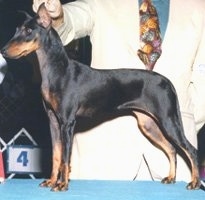 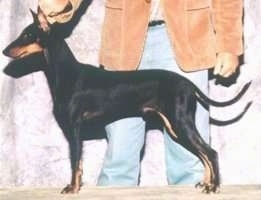 An adult Manchester Terrier at a dog show