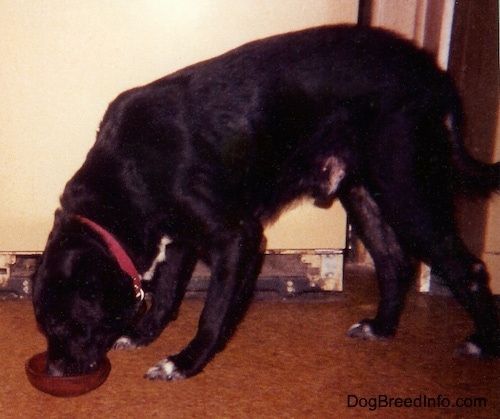 There are many varieties of dog food on the market, but that does not mean they are all good for your dog. When we go to the grocery store to buy food for our children, most of us are very careful about reading the labels. But when it comes to dog food, most people just buy the cheapest and never once look at the label.

I was as guilty of this as anyone until I began rescuing large numbers of dogs. And then my girls became interested in obedience, breeding and showing. I began to wonder if there was something I could feed them which they would utilize better—so I would not have to poop scoop ALL THE TIME. Now that may sound terrible, but when you are caring for 40 dogs and cleaning up after them because you want their environment to be clean, you start thinking of things like this.

Dogs are carnivores and need meat. I know there are people out there feeding their dogs a vegetarian diet, and I say to you that is your prerogative. But we are omnivores and they are carnivores. Hold up a carrot and a steak and see which one Spike goes for. If you feed your dog a can of corn, you will find that he does not digest it. It will all pass through him. The proof is in the poop.

Having said all that, let me tell you what you need to look for in regard to dog food for your pet.

The first ingredient should be a specified meat or specified meat meal, whether that is lamb, beef, chicken etc. Make sure the meat is specified and not just listed as a "meat" or "animal." You want to know exactly what type of meat is being used. See Rendered Products in Dog Food.

If you read the labels of some dog foods you will notice that some do not even contain real meat in them. They are mainly corn with sprayed on animal fat to enhance the smell and attract dogs.

Second, make sure the food contains no meat by-products such as: hooves, feathers, eyes, beaks, skin, fur, etc. Meat by-products are not meat. They are what is left after all of the good meat is taken off. In other words, the slaughterhouse waste that humans do not eat.

When a meat is not specified and is listed as "meat" or "animal" instead of telling you what kind of animal the meat came from be aware that could mean the meat came from a rendering plant. Rendering plant meat can be any kind of meat such as road kill, euthanized animals, diseased animals that died of who knows what and so on. I know of a farmer whose llama died of unknown causes. He took the body to the rendering plant after it had been lying in the barn stall for a day. Where the llama’s meat will end up is unknown. The rendering plants often sell their meat to dog and cat food companies as "bone meal," "meat by-products," "animal by-products" and "animal fat." Beware when they do not tell you what kind of "meat" or "animal" it is.

Third, make sure it is soy-free. Many dogs are allergic to soy and this can manifest through skin problems, breathing problems, and/or diarrhea, etc.

Corn can also cause many issues. Dogs were not meant to eat corn and other grains. Corn has been linked to skin allergies, joint swelling and bloat in dogs, among other things. See Corn in Dog Food. Really?

Whatever the first ingredient is listed as should be what will make up the majority of the product. However...be aware that a lot of dry dog foods will list the first ingredient as simply "chicken" and the second as, let’s say, "corn." This leads one to believe that there is more chicken in the food than corn. However they are weighing the chicken before the water is extracted out of the food and before it is cooked. Raw meat contains about 80% water. After it is cooked and the moisture taken out to make the dry dog food you are left with only about 20% of the meat’s original weight. Therefore these dog foods really contain much more of the second ingredient than the first. In a lot of cases that ingredient is corn. Whereas when the meat is listed as a "meal," for example "chicken meal," that is the meat AFTER the water has been extracted, giving you more meat.

The first ingredient should be a specified meat or meat meal. Grains, by-products, bone meal, animal fat (added for flavor), animal digest, sugar, corn syrup, added colors or dyes or any "meat" or "animal" that is not specified should be avoided.

It is far better to pay a little more for a good dog food than it is to buy cheap stuff. They will eat more of the junk dog food because they are not getting what they need. It passes right through them. On the other hand, if you feed your dog a good dog food, it is going to eat less because it is satisfied. It is utilizing more. That means less poop and fewer health problems down the road.

A poor diet can also cause a dog to shed more, have a duller looking coat and have body odor.

Dogs are primarily meat eaters and some brands simply give you sprayed on animal fat on top of cheap grains.

When is the last time you read the ingredients on the type of food that you feed your dog?