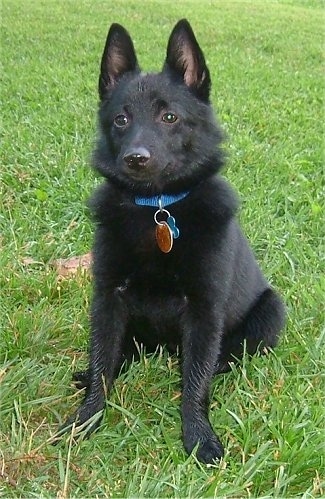 The Schipperke is small and sometimes described as fox-like. The body is square in profile. When the skull is seen from the side it looks slightly rounded, narrowing towards the muzzle. The muzzle is slightly shorter than the length of the skull. The small nose is black. The teeth meet in a scissors or level bite. The small, oval eyes face forward on the head. The erect ears are high-set and triangular in shape. The chest is wide, reaching to the elbows. The topline is level or sloping slightly toward the back of the dog. It is sometimes born tailless, but if born with a tail it is customarily docked to the base to the point where it is not visible. Note: docking tails is illegal in most parts of Europe. Dewclaws are usually removed. The thick double coat is shorter on the face, ears, front of the forelegs and the hocks. The coat is medium in length on the body and even longer around the neck, shoulders and rump. Coat color comes most commonly in a solid black, which is the only color accepted by the AKC, but also comes in range of tans and fawns which are acceptable by some other clubs.

The Schipperke is a quick, energetic little dog. It is high-spirited, alert and self-confident. Very devoted and loyal, especially with children. It really bonds to its master. Pet cats will be happily accepted and it is usually good with other dogs. The Schipperke is very smart, curious and mischievous. These dogs do exceptionally well on boats. Among the Schipperke's best qualities is the ability to defend its home against intruders—backing down from nobody, and being an excellent friend to children. Some can be difficult to housebreak. Socialize well to prevent them from becoming wary and aloof with strangers. Easy to train as it is intelligent and eager to learn. Oftentimes small dogs such as the Schipperke develop what is known as Small Dog Syndrome, varying degrees of human induced behaviors, where the dog believes he is pack leader to humans. When a dog is allowed to rule the home, it can develop behavior problems, such as, but not limited to, guarding, obsessive barking, separation anxiety, growling, snapping and even biting. Schipperkes that have been allowed to take over are said to have become hot-tempered, willful and protective. If someone new visits, they will adopt a watchful position and try to defend their territory, whether it is an apartment or a piece of land, against both two-legged and four-legged intruders. They may become obsessive barkers as they try and tell YOU what to do or try and TELL OTHERS to leave THEIR area. Schipperkes like to howl. After the initial bark to alert you, they need to be told enough is enough and to quiet down. Schipperkes that are given rules to follow, limits as to what they are and are not allowed to do, along with a consistent, firm pack leader, and a daily pack walk, will not develop these negative behaviors. Dogs that have already developed them will change for the better as soon as their canine instincts are being met.

Hypothyroid, epilepsy, hip dysplasia and hip sockets which tend to slip. Legg Calves Perthes, Progressive Retinal Atrophy (PRA), cataracts, and a newly discovered disease called MPS 111B (Mucopolysaccharidosis). There is a genetic test available for the MPS 111B through the Univ. of Pennsylvania. Be careful not to overfeed this breed.

Schipperkes are good dogs for apartment life. They are very active indoors. These dogs are incredibly quick and it is a good idea to have a fenced yard.

The Schipperke is an active and tireless breed. To be happy and mentally stable, they need to be taken on a daily, long walk or jog. They also enjoy play and getting a chance to run. This breed is very active indoors and will get a lot of its exercise running around your house. It will greatly enjoy running free off its lead in a safely fenced-in yard or a park.

The Schipperke is very clean and pretty much takes care of its own grooming, but to keep the medium-length double-coat in top condition, comb and brush regularly with a firm bristle brush. Dry shampoo when necessary. They shed very little until the coat "blows," which can be as often as 3 times a year on females; less so on males and spayed females, especially as they age. This coat change is a sudden drop of ALL undercoat within about a 10-day period. One owner sayss "I've pulled out up to two shopping bags full of soft, down hair out of one 12-pound Schip! I find it easier and quicker to give them a hot bath than force air the coat two or three times during this week (always outside!) to get rid of all the loose, itchy hair before the dog leaves it all over the house. A groomer could do this for the person without a force dryer. They are literally naked and butt ugly for about 2-3 months, depending on the time of year and how much time they spend outside, for the hair to come back to a new lustrous coat."

The Schipperke was bred in Flanders by a canal boat captain named Renssens. It was descended from a 40-pound (18 kg) black sheepdog, known as the Leauvenaar, which is the same sheep-herding stock that the black Belgian Sheepdog descended from. The Schipperke was bred smaller and smaller and eventually became a different breed entirely. The dogs became a favorite choice to guard canal barges in Belgium. The breed was used for herding livestock, hunting game or simply guarding his domain. In Flemish the word "schip" means boat, hence where they got their name "Schipperke." They earned the nickname "Little Captain" and "Little Skipper" because the dogs were the "ratters," a very important function on a canal barge, and also usually the captain's dog. The breed became very popular in Belgian households by the late 1800s. It first appeared at a dog show in 1880. From that point on it was exported throughout the world. Schipperkes do very well on boats and people often get this breed to come along with them on boating and fishing trips. It makes a great guard dog when the boat anchors for the night, alerting of anything out of the ordinary and the dog thoroughly enjoys its trip. The Schipperke was recognized by the AKC in 1904. 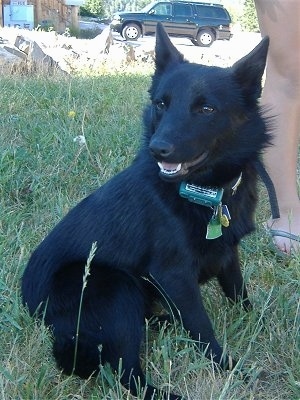 "This is Shade, a Schipperke at 3 years old, and he's the best dog I've ever owned. My family runs a lodge in South Dakota (the Black Hills) during the summer, and every year Shade comes with us. He knows the boundaries and spends every day making rounds over the place, barking whenever a car pulls in, and as soon as they get out he greets them and leads them to the office door. He's extremely stranger-friendly and plays with all the kids even though he's never met them, tolerating all their man-handling with a wagging tail. When we have campfires I tell him "Shade, sing us a song" and at that cue he will yodel for you, which makes everyone laugh. He's my sunshine, and I have never met a more intelligent, entertaining boy!" 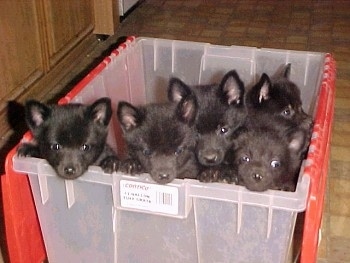 A container of Schipperke puppies—Centaur: the Pony & Schipperke Collector 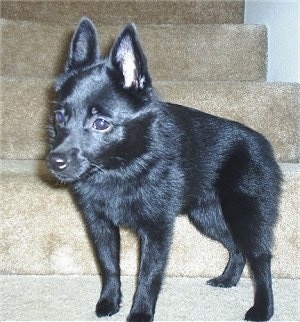 Tori and her brother Buddy at 3 months old 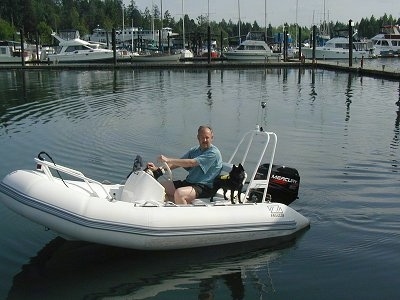 Tori the Schipperke enjoying what she does best, riding on the boat with daddy!

See more examples of the Schipperke