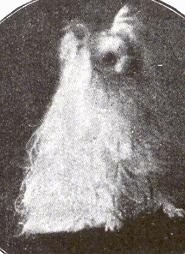 The Seidenspitz has a long, fine and silky coat. The hair is straight, and should stand fluffily away from the body that is found in other Spitz breeds, never being wavy, curly, rolled or shaggy. The color is white with black pigmented nose and black eyes. A black-coated Seidenspitz with black pigmented nose and black eyes is also accepted but the white-coated Seidenspitz is much more preferred. The size and weight of the Seidenspitz is the same as the Pomeranian, with "hair like" paws. Grooming for the show clip consists of the paws, the muzzle and the ears to be shaved to achieve the "Spitz" look. The less shaving that needs to be done to produce this "Spitz" look, the higher his value is. The Seidenspitz has a long, glorious, fine and silky coat.

The Seidenspitz is a good dog for apartment life. It is very active indoors and will do okay without a yard.

The Seidenspitz needs a daily walk. Play will take care of a lot of its exercise needs, however, as with all breeds, play will not fulfill its primal instinct to walk. Dogs that do not get to go on daily walks are more likely to display behavior problems. They will also enjoy a good romp in a safe, open area off lead, such as a large, fenced-in yard.

This out-of-the-ordinary coat texture for a spitz was achieved in the 19th century through crossing the Pomeranian with the Maltese and then shaving the resulting pups to create the illusion of a spitz coat's growth pattern. The ears are shaved, and the feet and legs are trimmed to resemble a Pom's legs and feet. This tiny toy dog is a very old breed which was fully developed in its country of origin, Germany. This silky, long-coated spitz flourished in Germany as far back as the late 1890s. Most records of this old toy breed were destroyed during World War I and World War ll. Some of the German stud books that did survive showed a male registered as Meister Lindenberg , whose registration number was 431D, whelped November 4, 1900, and owned by Frau E. Schmale of Lindenber bei Berlin. A female registered as Gretchen von Hangelsberg, whose registration number was 430D was whelped November 20, 1898; her owner was Herm. Schimmelpfenning of Berlin. Two Seidenspitz were exhibited at an all-breed dog show in Hanover, Germany in 1925. One female was whelped in 1925 and the other female was whelped in 1927 and was out of a Champion sire and female. Numerous doctors in Germany were involved in breeding this tiny toy dog. One doctor in Switzerland, Dr. Kuenzli of St. Gallen, had a very famous Seidenspitz known as Ohdin.

It is unclear whether or not all of the breeders breeding the Seidenspitz are using the same original German lines or if their stock originated from crossing the Pomeranian with the Maltese, which is considered the Maltipom hybrid, also called Malti-Pom and Pomanees.

The recognition of the breed, and the only known records that survived in Germany, is by the DC founded in 1897. The Delegierten Commision e.V. has given the International Seidenspitz Foundation the right to re-establish the breed under its direction and guidance. 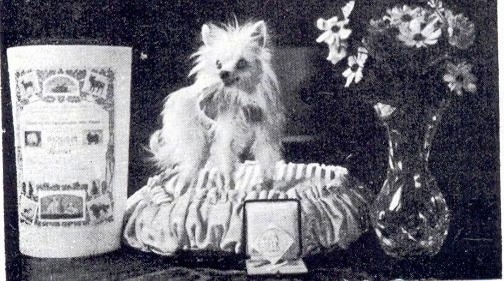