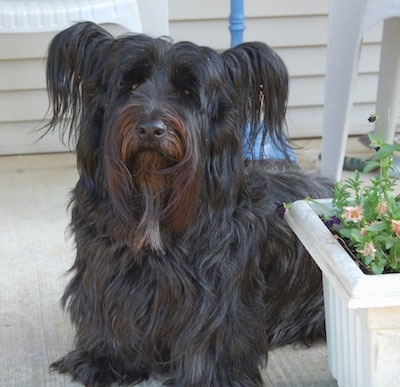 Bear the Skye Terrier at 6 years old—"I have had Bear since the day he was born, at one time I raised this wonderful breed. He is so very loyal and loving. This breed is very rare, but if people knew what wonderful pets they make they would be a very popular breed. Bear has been raised with my grandchildren and loves them very much. He loves when they come to visit."

The Skye Terrier is a long, low to the ground dog, with the length being twice as long as the height. The head is long, tapering to the muzzle with a slight stop. The nose is black. The teeth meet in a level or scissors bite. The eyes are brown; darker is preferred in the show ring. The symmetrical ears are either erect or dropped (dropped are rare). The tail is long, hanging with abundant feathering, pendent and never curled. The long, large feet are hare-like, pointing straight forward. The double coat has a soft, woolly undercoat and a flat, straight, hard outer coat that is about 5 1/2 inches long (14 cm) and hangs down on each side, parted in the middle from head to tail. The solid-colored coat comes in black, blue, gray-blue, dark or light gray, silver platinum, fawn or cream. There may be black points on the ears, muzzle and tip of the tail. There is sometimes a small amount of white on the chest. Puppy coats often change in color by the time they are adults.

The Skye is very good-natured, loyal, polite, loving and affectionate. Brave, bold, spirited, playful and happy, it loves attention. Can become a bit willful with a meek or passive owner, needing a handler with a natural air of authority. Socialize well with different people, noises and sights. This breed likes to chase; take caution with other small non-canine pets. Do not allow this breed to develop Small Dog Syndrome, human induced behaviors where the dog believes it is the boss of the home. When this is allowed to happen the dog’s temperament changes for the worse, and may include such behaviors as dog aggressiveness, suspicion of strangers, overprotectiveness, obsessive barking and, in the worst cases, biting.

The Skye Terrier is good for apartment life. It is relatively active indoors and will do okay without a yard.

The Skye Terrier needs a daily walk. Play will take care of a lot of its exercise needs, however, as with all breeds, play will not fulfill its primal instinct to walk. Dogs that do not get to go on daily walks are more likely to display behavior problems. These dogs will also enjoy a good romp in a safe, open area off lead, such as a large, fenced-in yard.

If the coat is kept long it needs to be brushed frequently or it will mat. Some owners choose to clip the coat shorter for easier care. It may take several years for the full adult coat to come in. This breed is an average shedder.

The Skye Terrier is among one of the oldest terriers known today. In the early 1600s a Spanish ship wrecked off the island of Skye in the Scottish Hebrides. The ship had Maltese dogs onboard that survived and mated with the local terriers, resulting in the Skye Terrier breed. The dogs were used to hunt down vermin, fox and badger that would prey on the farmer's livestock. In the 19th century Queen Victoria took a liking to the breed and the Skye Terrier became very popular for a while, especially among the nobility. A Skye named "Greyfriar’s Bobby" was said to have guarded the grave of Constable John Grey, who was his master, for 14 years. Townspeople came and fed him until he died at age 16. A statue was placed in Edinburgh in the dog's honor. The Skye was first exhibited in England in 1864. The AKC recognized the breed in 1887. 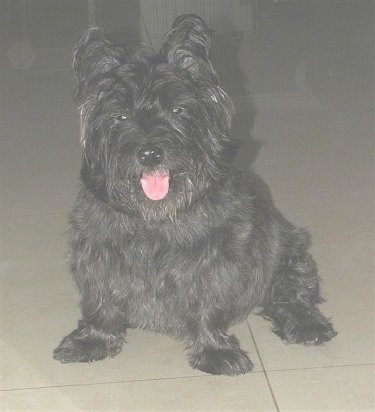 Magic the Skye Terrier at 15 years old lives in Thailand. Since the climate in Thailand is quite hot, he gets trimmed every two months. 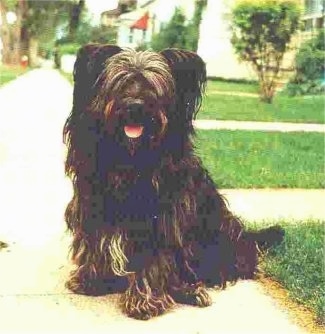 "This is my 14-15-year-old Skye Terrier named Sam. I have had him for all but the first year as he was a SPCA rescue dog. The intelligence that he displays is really something. It’s almost as if he can figure things out to get what he wants. He would probably like Flyball or something. He has learned tricks, etc., but only comes when called if he knows the reward structure is in place.". 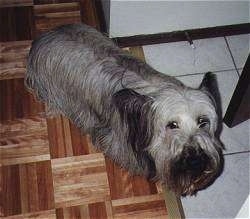 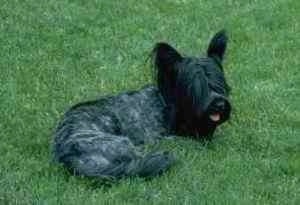 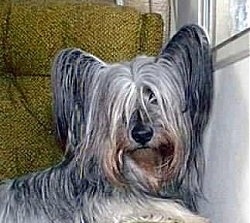 This is Ailie (Skye Terrier rescue). Yep, she's a pistol!