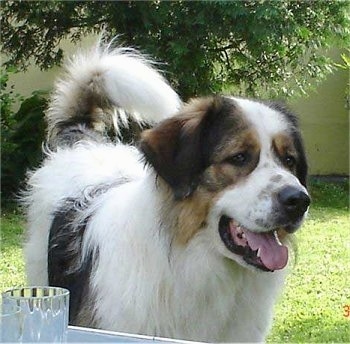 The Tornjak is a large and powerful dog, well-proportioned and agile. The shape of the body is almost square. The bone is not light, but nevertheless not heavy nor coarse. His coat is long and thick. The body of this dog is strong and well built, with harmonious and dignified movements. The hair is long and thick and adequately protects the body against bad weather conditions. The tail is shaggy, kept high like a flag. The Tornjak has a clear, self-confident, serious and calm look to it. In general, the Tornjak is a long-coated dog with short hair over the face and legs. The topcoat is long, thick, coarse and straight. It is especially long on the upper part of the croup, over the shoulders and the back can be slightly wavy. On the muzzle and the forehead, up to the imaginary line connecting the ears, over the ears and on the front parts of legs and feet it is short. It is especially abundant around the neck (mane), dense and long over the upper thighs (breeches). It forms feathers along the forearms. With well-coated dogs it is also especially abundant on the rear of hind pasterns. The tail is richly coated with very long hair. Winter undercoat is long, very thick and of a nice woolly texture. Hair is thick and dense and should not part along the back. As a rule the Tornjak is parti-colored with markings of various solid colors. Usually the dominant ground color is white. There may be dogs with a black mantle and with white markings most often found around the neck, over the head and along the legs. There may also be almost-white dogs with only small markings.

The Tornjak is used for herding and protection of livestock; a farmyard guard dog. He has a stable temperament. He is friendly, calm, courageous, obedient, intelligent, full of dignity and self-confidence. When working he is fierce in guarding property entrusted to him, cannot be bribed and is suspicious of strangers. He will protect his owners, herd and property with his life. The Tornjak is friendly with people he knows. Devoted to his master and very composed in his presence, he is very affectionate toward people living in his immediate vicinity. Learns quickly and does not forget things easily, gladly performs tasks assigned to him. Strong and hardy, during the snowing winter nights, these dogs lie on the ground and often get covered by snow. He is easy to train. he objective in training this dog is to achieve pack leader status. It is a natural instinct for a dog to have an order in its pack. When we humans live with dogs, we become their pack. The entire pack cooperates under a single leader; lines are clearly defined. You and all other humans MUST be higher up in the order than the dog. That is the only way your relationship can be a success.

The Tornjak is not recommended for apartment life. They need space and will do best with at least a large yard. Because its thick coat protects it so well, it can happily cope with living outdoors provided it has proper shelter.

This breed of dog is best suited to a family with lots of space surrounding the home. It needs to be taken on a daily walk.

Comb and brush with a firm bristle brush, and bathe only when necessary. Shampoo may strip the coat of its oily, water-resistant properties, so use a mild soap. This breed sheds twice a year.

The Tornjak originated from the areas of Bosnia, Herzegovina and Croatia and has existed in those areas for the past thousand years. The Tornjak was registered under the name Kanis montanus which translates to mountain dog, but the local people gave it the name Tornjak (tor: enclosure for sheep and cattle). The Tornjak was registered as autochthonous breed on May 9, 1981 with the name "Bosnian-Herzegovinian sheepdog - Tornjak." According to research, the Tornjak is most likely the descendant of the Tibetan Mastiff or from where the today's Iran is. The environment has created a healthy and strong dog, with modest needs for food and shelter, and a great watchdog. 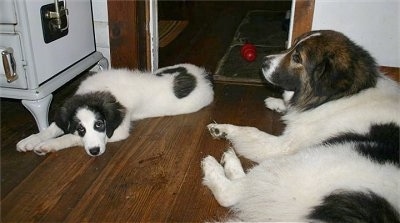 Giggle the Tornjak puppy at 7 months old with Pickle, an adult Tornjak at 5 years old—“We named him Pickle because he was born on Mt. Vlasic in Bosnia. They are two of only a handful of Tornjaks in the U.S.” 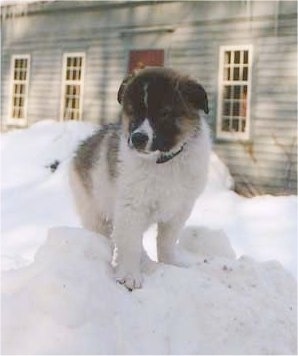 Pickle the Tornjak as a puppy 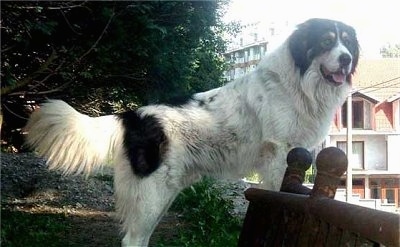 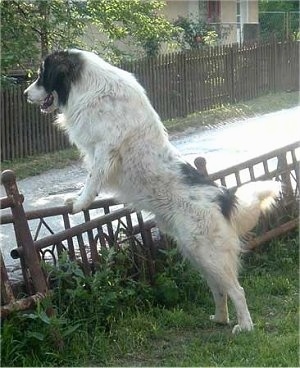