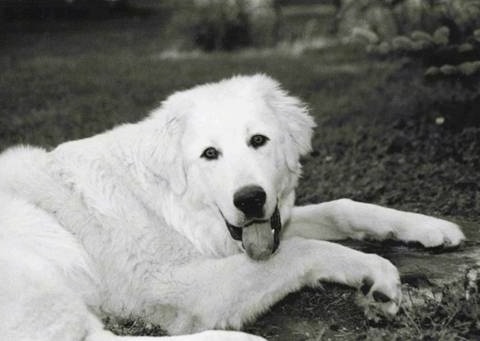 Kuzco the Akbash—his family says, "He loves to herd the whole family, and we love to be herded by him!"

This solid white flock guard dog is equipped with keen hearing and superior strength. Its white, weather resistant, double, short to medium length coat is coarse and non-matting, with very little doggy odor. The Akbash has a massive head and powerful jaws. The V-shaped ears are set high with the tips slightly rounded, flat to the skull, and are carried pendant. Imported Turkish dogs may have cropped ears. Its almond shaped eyes are set well apart and distinctly oblique. Eye color varies from light golden brown to very dark brown. The neck is strong and muscular, medium in length and arches at the crest. It has strong, large, well-arched toes. The nails are blunt and gray, brown or white. The pads are thick, hard, elastic and normally dark. The tail is long, reaching to the hocks. There is an elastic, springy nature to the gait.

The Akbash Dog is a primitive guard dog breed, requiring owners who understand canine behavior. The dogs are a combination of submissive posturing to livestock and dominance aggression—to stand up against bears and wolves. They require owners dedicated to constant socialization if kept as companions. They are naturally dog aggressive. In town with sights and sounds everywhere, barrier frustration-aggression is common. This is a serious working breed and is best placed where it can have a job to do. They are opportunists for taking over control so they are best placed with children over eight years of age, when the child can participate in submission exercises, with an adult, on the dog. Barking and patrolling is their primary means of defense and so they will bark if out at night. Trouble usually occurs when friends come over and aren't supervised by someone the dog knows. As a guardian/guard dog breed, the trained and socialized dog will defer to the owner when the owner is present and will be friendly and happy to visit visitors, however they consider unsupervised people as suspicious. This is an intelligent, courageous and loyal dog, completely dedicated and devoted to its owner and any livestock in its charge. Independent with strong protective instincts. The Akbash is a natural guardian that even at a very young age will bond strongly with the livestock it is protecting. It has such strong maternal instincts that sheep will often allow this dog to sniff and clean their newborn lambs and will flock behind their guardian when threatened. Because of their strong maternal instincts, they are usually good with infants. The dog's independent nature allows it to respond swiftly and without guidance in an emergency. There is no difference in guarding ability between the male and female. Some of the animals the Akbash Dog has guarded include sheep, goats, cattle, horses, poultry and exotic birds, deer, alpacas and llamas. Once bonded, these dogs will not hesitate to risk their own lives to protect their charges. The Akbash Dog has even been used by American ranchers to ward off bears and coyotes. Because of its strong independent nature, it thinks twice upon receiving commands. Not recommended for first time dog owners, or people who do not wish to have a serious guard dog. Companion dog owners should be prepared to spend a fair amount of money on good fencing and a lot of time on socialization and maintaining the humans pack leader status over the dog. The Akbash dog needs a firm, but calm, confident, consistent owner.

Although cases of hip dysplasia and OCD have occurred, as with any large, rapidly growing breed, the breed as a whole does not seem to be afflicted with these conditions to anywhere near the degree of many other large breeds. Buy only from OFA hip certified stock.

Akbash Dogs are not recommended for apartment life. They are relatively inactive indoors and do best with a minimum of a ¼ acre and at least a 5' tall fence. They should live in semi-rural or rural settings. This breed is quiet and clean in the house.

They are a low activity level dog, but also an extremely athletic dog requiring a long daily walk and a lot of space to run around off its lead.

The hard coat is clean, non-smelling and non-matting but does require brushing to help the shedding process. They are above average shedders.

Also called the Coban Kopegi and the Akbas, the Akbash Dog is an elegant, rare breed from the area we now call western Turkey. It was developed 3000 years ago by shepherds who selectively bred for white-colored guarding sheepdogs, perhaps to differentiate them from predators. The Akbash is a probable relative of the other great white herd guarders of Europe such as the Komondor, Kuvasz, Tatra Mountain Sheepdog, and even the distant Pyrenean Mountain Dog. The name Akbash come from the Turkish word "akbas" meaning "white head." 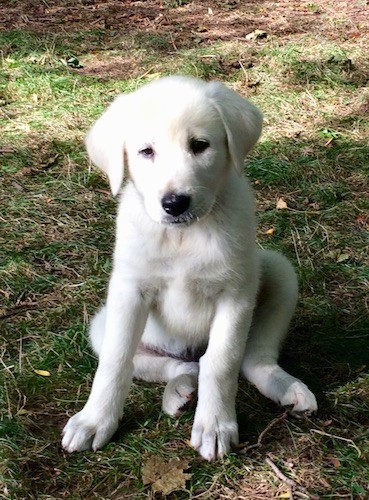 "This is Cora our Akbash when she was 8 weeks old. She is now 2.5 years old and 108lbs. This breed is fantastic! The fur cleans up so well and her gentle disposition makes her a community favourite. Your description of this breed is perfect, even down to the detail that Akbask will think through your command! It’s true, Cora will pause and think and then act.... not always as I had planned though. Her bond to our children has been HUGE in helping them navigate the teenage years. We love her dearly. We are rural and I would definitely discourage having this breed in suburbia as they do love to roam." 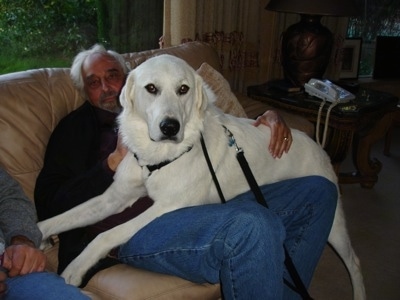 "This is our Akbash dog, Bear. He is 1 1/2 years old. We just got him from a rescue. This picture was taken when he first met his new owner." 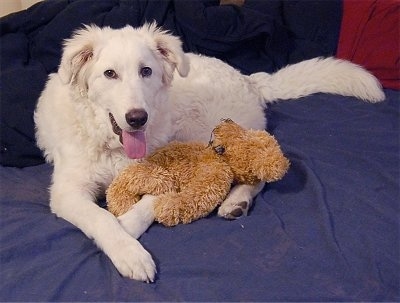 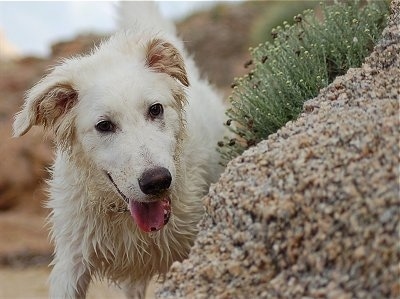 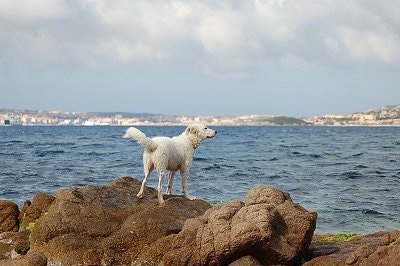 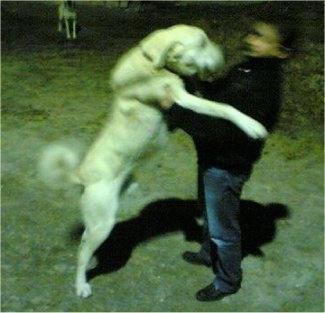 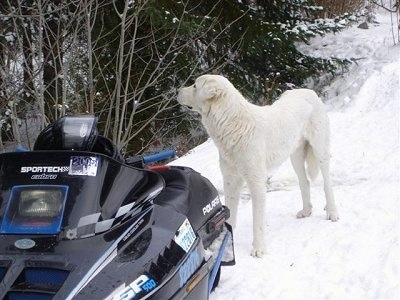 Ivory the Akbash Dog—his owner says, "He's a grrrreat dog! He was 4 months old when I got him and he was unsocialized. Thanx to my Pit Bull Ebony (his girlfriend); she helped me train him. When I first got him he would not come to me. It took about a month for him to even come close to me, but these days he's doing his job which is to watch over the house and all my other pets."