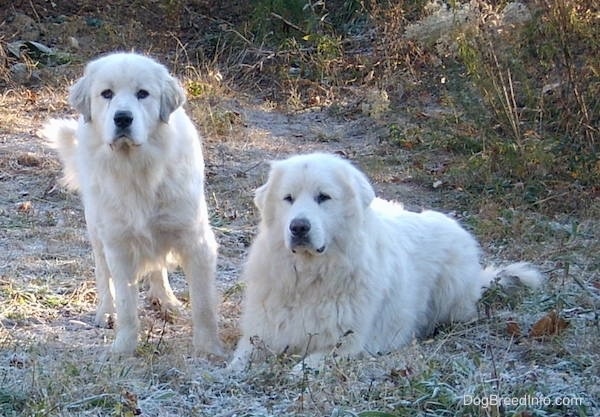 The Great Pyrenees is also known as the Pyrenean Mountain Dog. The length of the dog is slightly longer than it is tall. The head is wedge-shaped with a slightly rounded crown and is in proportion to the rest of the body. The backline is level. The muzzle is about the same length as the back skull. The skull is as wide as it is tall with flat cheeks. There is no apparent stop. The nose and lips are black. The teeth meet in a scissors or level bite. The dark brown, medium-sized eyes are almond shaped and slanted. The dark brown, V-shaped ears are carried low, flat and close to the head, rounded at the tips, and set about eye level. The chest is fairly broad. The well-feathered tail reaches the hocks and can be carried low or up over the back in a wheel when the dog is excited. There is sometimes a crook at the end of the tail. The Great Pyrenees has single dewclaws on the front legs and double dewclaws on the hind legs. The dog has a weather-resistant double coat. The undercoat is dense, fine and wooly, and the outer coat is long, thick, coarse and flat. There is a mane around the shoulders and neck which is more apparent in male dogs. There is feathering on the tail and along the back of the legs. Coat is either solid white or white with patches of tan, wolf-gray, reddish-brown or pale yellow.

The Great Pyrenees is a capable and imposing guardian, devoted to its family, and somewhat wary of strangers—human and canine. It is often used to guard livestock. When not provoked, it is calm, well-mannered and somewhat serious. Courageous, very loyal and obedient. Gentle and affectionate with those he loves. Devoted to family even if self-sacrifice is required. It is very gentle with its family and children. It does best with children when it is raised with them from puppyhood, and if it is not being used as a working flock guard be sure to socialize it well with people, places and noises. It has an independent nature, and may try to dominate a less secure or meek owner, and/or an owner who treats the dog as if he is human, becoming stubborn or territorial. Owners need to be firm, but calm, confident and consistent with the dog. Setting rules the dog must follow and stick to them. The Great Pyrenees is a serious worker, but very independent. Be patient when training the Great Pyrenees, as it may be slightly difficult. If left alone inside the home without the proper amount of exercise and or leadership it can become destructive. The Great Pyrenees is good with non-canine animals, and usually loves cats. These dogs do not reach maturity until they are about 2 years old. Some are not good off the leash and may wander away. They need an owner who understands and practices natural dogmanship. The Great Pyrenees tends to bark a lot and some tend to drool and slobber.

These dogs are not recommended for apartment life and would do best with a mid-to-large sized yard. They need space, but adapt well to family life. They are not really active indoors, but need regular exercise outdoors. A fence is a must as they may wander away in search of the borders to what they believe is their territory. Puppies are very active and might have the tendency to wander off or escape. Prefer cool climates.

Pyrenees need plenty of exercise to stay in shape. If they are not actively working as flock guardians, they need to be taken on a daily, long brisk walk.

Regular brushing of the long double coat will keep it in good condition, but extra care is needed when the dog is shedding its dense undercoat. The outer coat does not mat unless there is a burr, foxtail or some other outside object that gets stuck to the coat. This can be an issue for outside working dogs. Some owners choose to shave the coats in the summer to avoid this from happening, but beware of sunburn

. Bathe or dry shampoo only when necessary. Great Pys shed all year round but do so heavily once a year.

The Great Pyrenees originated in Central Asia or Siberia. The breed was descended from the Hungarian Kuvasz and the Maremmano-Abruzzese. The Pyrenees is also a relative of the St. Bernard, contributing to its development. It has a long history as a guard dog of sheep. The dogs made their way to Europe; the Great Pyrenees remained in the high mountain regions until the Middle ages, when the breed gradually gained popularity with the French nobility as a guard dog. By the late 17th century, every French noble wanted to own one. Armed with a spiky collar and thick coat, the Great Pyrenees protected vulnerable flocks from such predators as wolves and bear. The Great Pyrenees has proven to be a very versatile breed working as an avalanche rescue dog, as a cart-puller, sled dog, as a pack dog on ski trips, a flock guardian, dog of war, and as a companion and defender of family and property. The AKC officially recognized the Great Pyrenees in 1933. 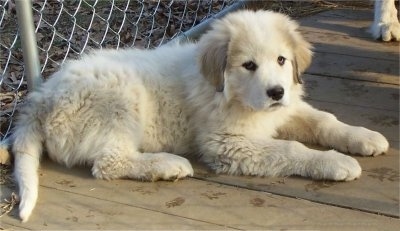 Tacoma (aka Taco) as a puppy at 12 weeks old 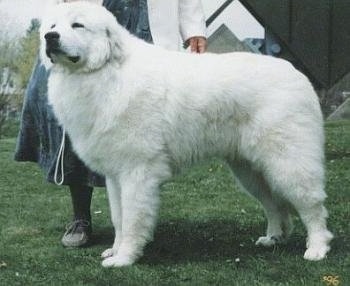 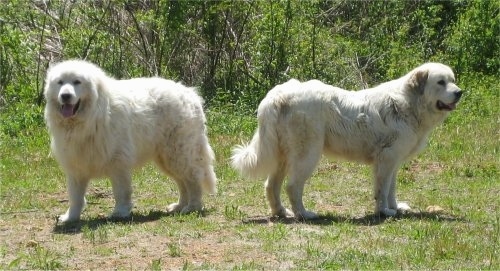 "Tundra (left) from show dog lines, and Tacoma (right) from working lines, are both working together as flock guards on a farm. Tundra has an immensely thick coat. While working, burrs and sticks get caught in his coat and have to be worked or cut out. Tacoma, on the other hand, has a thinner coat. It’s still thick compared to most breeds, but is much thinner than Tundra's show coat. Burrs and sticks do not get caught in her coat as easily. Tundra, from show lines, is less wary of strangers than Tacoma. Tacoma is more likely to bark at strangers, she keeps her distance and circles around the person or stays back barking and wagging her tail at the same time. Tundra (show lines) is still wary of strangers; however, he is more likely to walk up to be petted than Tacoma is. It is very, very rare that Tacoma will approach a stranger to be petted. She keeps her distance, barks, but does not show signs of physical aggression. At night Tacoma seems to be more on guard than Tundra; Tundra will often stay in one spot for the night while Tacoma will walk the border of the property over and over, barking at and chasing anything she thinks does not belong. I have seen Tacoma chase a fox off the property. The fox got away through the fence, but not by much. The chickens were safe that night! Tundra will bark at night and I have seen him run after animals that do not belong, but not as often as Tacoma. Both dogs live outside with a herd of goats, two horses and nightly free roam around a chicken coop, guinea fowl and peafowl, which they protect from the fox, raccoon, possum and skunk. Without these two flock guards I am sure we would have no birds left. They have saved them countless times." 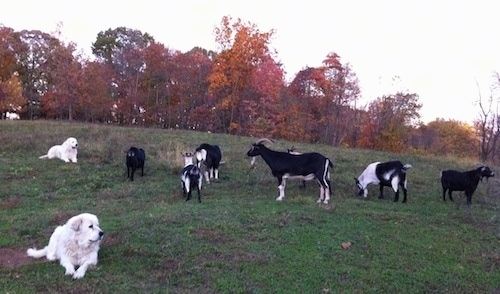 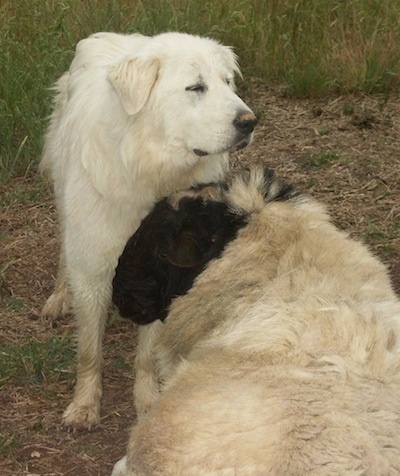 "We bought Osa, a spayed female, at age 2 months in 2008. She was put right in with three ewes and a ram. We now have thirty sheep, including 11 lambs born since late November. This photograph is typical of her behavior regarding the ram and one or two other ewes. She will hold this pose for up to 30 minutes or so, sometimes with eyes closed, often with eyes open, and it seems very Buddhist. Do any other Great Pyrenees folk know this behavior or have seen anything like it? This is the world's coolest dog." 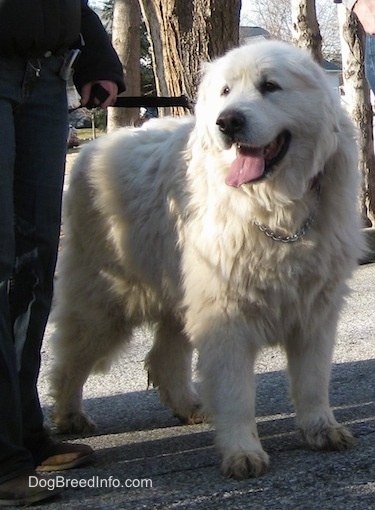 Tundra the Great Pyrenees out on a walk