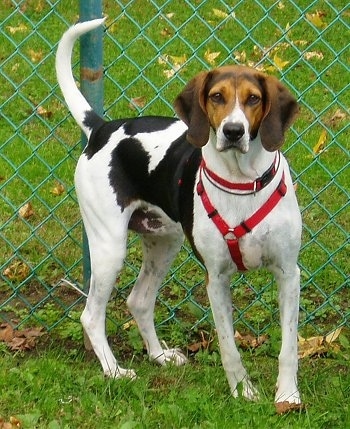 While similar to its English cousin, the American Foxhound has been developed by its breeders to be lighter and taller, to have a keener sense of smell, and to be even faster in the chase. A large, handsome hound, its front legs are long and very straight-boned. The head is long with a slightly domed, large skull. The ears are broad and pendant, framing the face. The eyes are large and wide-set, either brown or hazel, with a sweet, imploring expression. The ears are wide and flat to the head. The tail is set moderately high with a slight upward curve, but is not turned forward over the back. The short, hard coat may be any color.

The American Foxhound is sweet, affectionate, gentle and loving at home, but also a brave and intense warrior in the hunt. They are excellent with children and get along well with other dogs because of their pack-hunting background, but should not be trusted with non-canine pets. Friendliness to strangers varies widely. They are very friendly dogs, however if a particular dog is allowed to see himself as pack leader to humans he may become protective. Be aware, the American Foxhound will take off after an interesting scent if it gets a chance. They like to bay and have a melodious bark; so much so, in fact, that its tones have been used in popular songs. Foxhounds don't always make good house pets due to their history as outdoor pack kennel hounds. If you are looking for a pet that you are not going to take hunting, try show lines rather than field types. No matter what type you decide on be sure to provide plenty of daily exercise, and be your dog's firm, but calm, confident, consistent pack leader to avoid behavior issues.

A fairly healthy breed, American Foxhounds are free of many genetic diseases, such as hip and bone problems, that plague other large breeds. Gains weight easily; do not overfeed.

American Foxhounds are not recommended for apartment life. They are very active indoors and do best with acreage.

This dog is extremely energetic and tireless. It is very important that it gets daily vigorous exercise to prevent extreme indoor restlessness. This breed should not be taken on as a family pet unless the family can guarantee plenty of vigorous exercise. They need to be taken on a daily, brisk, long walk, jog or run alongside you when you bicycle. While out on the walk the dog must be made to heel beside or behind the person holding the lead, as instinct tells a dog the leader leads the way, and that leader needs to be the human. Teach them to enter and exit door and gateways after the humans.

The smooth, short-haired coat is easy to groom. Comb and brush with a firm bristle brush, and shampoo only when necessary. This breed is an average shedder.

The American Foxhound is directly descended from English hounds brought to America in 1650 and bred over a century later to a French hound sent as a gift by Lafayette to George Washington. Washington ran a breeding program and often mentioned the hounds in his journals. The two breeds, French and English, in combination have produced the American Foxhound. In the seventeenth century, these dogs were used for seeking out Indians. Later, however they became efficient and untiring hunters of wild animals. The American Foxhound has an excellent nose, and is very fast when giving chase. He has great stamina for running and a musical bay. The American Foxhound is still primarily a hunting and field trial dog in both packs and alone, though he has also had success as a companion dog for those owners who provide enough exercise and activities. Its talents are hunting, tracking, watchdog and agility. The American Foxhound is somewhat faster and a little leaner than the English Foxhound.