These photos were taken in the wolf park "Les loups du Gévaudan" in Sainte Lucie, near Marvejols in the Gévaudan area, department Lozère, France. In this area the famous "Bête du Gévaudan" made 100-odd victims in 1764-1767. A brief review of this affair is given at The Beast(s) of Gévaudan. The "Beast" became a legend in its own time and its name still resounds strongly in French wolf-lore. This, of course, favoured public interest in a wolf park in this area, which was opened in 1985.

A statue of the Beast has been placed in Marvejols in 1958 on a peaceful little square which has recently been modernised. 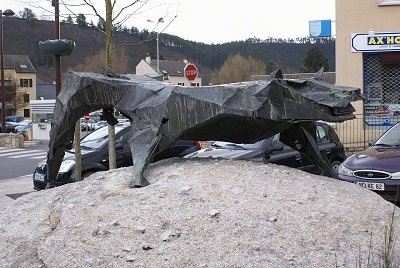 If the Beast really looked anything like this, one has no trouble understanding people's fear of it… Actually what interests me most is the common points with the plate iron wolf silhouettes over the park's entrance. 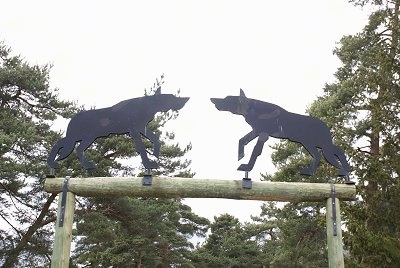 In the statue, what little tail it has is between its hind legs. In the silhouettes the tails are between the hind legs but not curled up and their hindquarters are lowered. This translates fear but not full submission. In both the statue and the silhouettes the ears are pricked up, which translates aggression rather than fear. Wouldn't shepherds who confronted wolves over the issue of a sheep often have seen wolves in postures like this which translated both fear and the will to hold on to their quarry?

Wolves have learned over the ages to fear man and became expert at avoiding him. Most wolves seen close up would have been those who confronted shepherds or who had been cornered by hunters. I think this might well be the way lowered hind quarters became such a foremost feature in the image man retained of the wolf. Unfortunately for the German shepherd, this led breeders to select it on sloping hindquarters in order to resemble the wolf. The breed is still recovering from the physical damage this has done whilst the image that inspired this craze was totally false from the start. Look at as many photos of wolves that are not afraid and tell me if you see one with down-sloping hindquarters otherwise than for females to urinate…

The first three pictures from the park are wolves from Mongolia. The observation posts allow you to take pictures without having the fence between you and the wolves and at this point the enclosure slopes up from the path, giving a good perspective for photos. 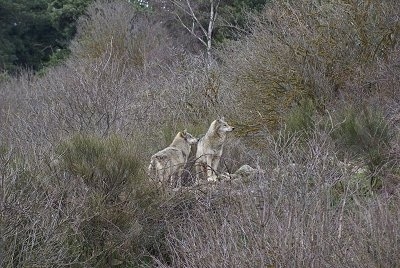 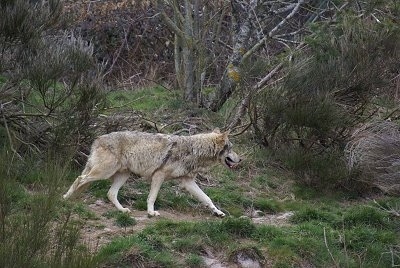 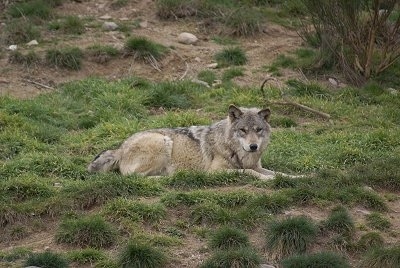 When I arrived, the Polish wolves in the enclosure that the building's terrace overlooks were having a morning rest. After I had walked around they were getting up, some having their morning cuddle, others quietly stretching their legs. 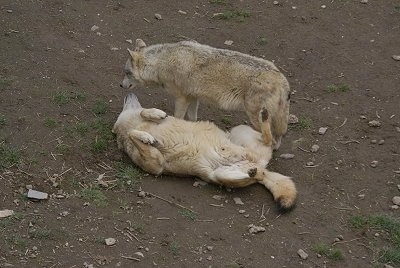 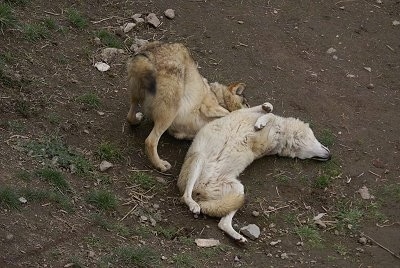 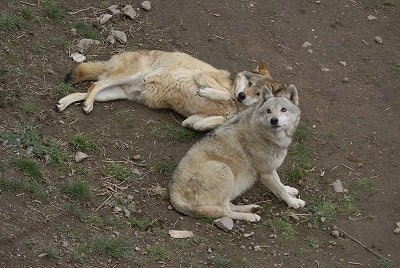 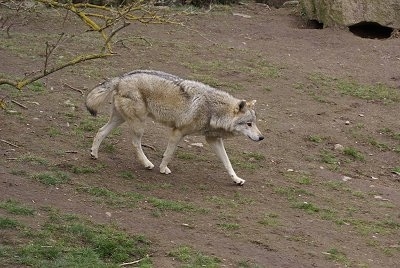 Then, however, the yearlings thought it was playtime. That was when I got my camera rattling full throttle… 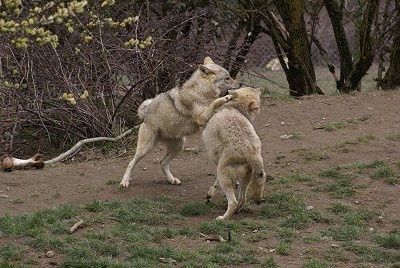 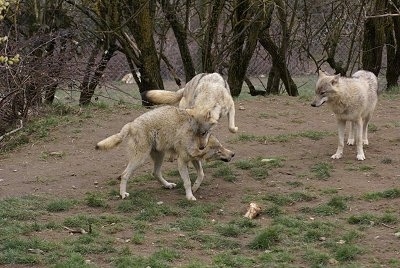 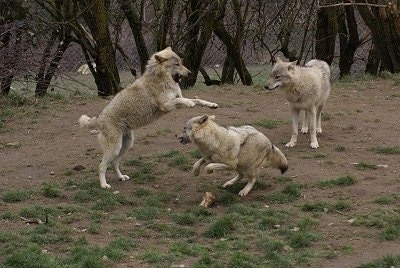 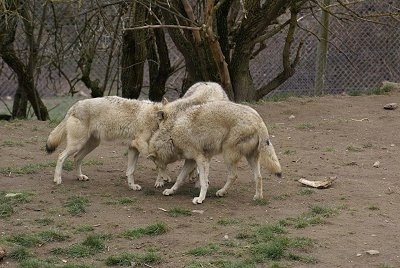 Enthusiasm spread and nearly all wolves joined in the scrum. The second of these two photos shows the importance of play in the social structure, with the two wolves in front demonstrating a domination-submission posture. 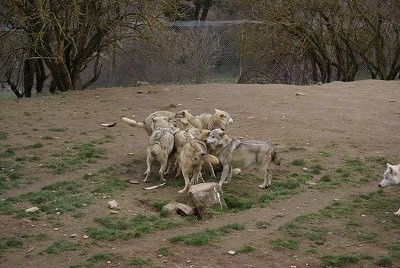 Just when the playing was ending a wolf voice came from one of the other enclosures and was answered collectively. These photos were taken on an April morning. Of course you wouldn't expect as much activity in any wolf park on a hot summer afternoon…

I use a Sony DSLR-A-100 digital reflex camera with the standard Minolta 18-70 and 75-300 mm lenses (which give, respectively, a 35 mm equivalent of 27-105 and 113-450 mm, so quite adequate for most nature photos). Using the 75-300 mm lens mostly and light not being abundant, the camera's anti-shake system prove its worth as it would be very difficult indeed to keep up with the wolves' movements having it on a tripod. A monopod with a cardanic pivoting head is great, but unless you have the luck to buy one off a former sports photographer, as I did, that's quite an investment. Training your breathing is a good help and a lot cheaper…

Using high resolution (10 Mpixels) this type of camera produces files of between 3 and 5 Mb apiece in this sort of situation with the lighting and colour differences. Shooting away as one is obliged to do when things get moving, I took almost 300 photos of the playtime and singing session alone, so in about 20 minutes' time. What with the other photos taken before, my 2 Gb memory card was almost full. Now that prices have gone down I therefore advise everyone who envisages buying this sort of camera to get a 4 Gb card right away. Of course you can lower the resolution, but personally I prefer to keep it at its maximum to allow for blowups.