Human to Dog No-No's: What NOT to do with someone else's dog 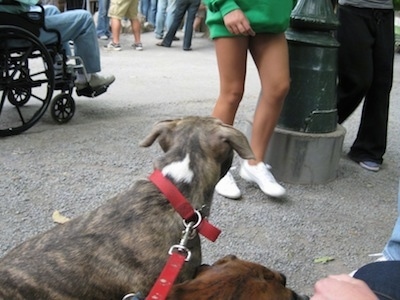 What I find the hardest about training and keeping my dogs respectful is not dealing with the dogs themselves but dealing with the humans out in public that we come across. The natural behaviors of a dog are so misunderstood and misread that everywhere I go humans do things that make it difficult for someone who does have well-balanced dogs to keep them respectful at all times. It is easy for me to control my dogs but it is not easy for me to control all the humans around them.

Here is an example: I was sitting on the bench at the vet’s office with Spencer the Pit Bull. I had wrapped Spencer's leash around my legs to help hold him there, knowing that he is very strong and I would be around humans who often do things that get him excited. Spencer was standing nicely waiting our turn when a man who was about 5 feet away at the other end of the bench started calling Spencer to him. He clapped his hands to his legs and said, "Hey come here, come here boy." The man wanted to pet Spencer. Spencer of course pulled towards the man. Since the leash was wrapped around my legs I was able to hold him there. I pulled him back with what leash was left and told him to stay. The man responded with the typical, "Oh does he bite?" to which I replied, "No it's just rude for him to pull me on a leash like that." The man then slid over on the bench closer to Spencer and proceeded to sweet-talk and pet him and get him very excited.

In the room there were dogs and people everywhere and I as his owner would have preferred to keep him calm at that moment so he would be more manageable when it was our turn to go back to see the vet.

I cannot tell you how many times I am out walking my dogs on a leash when humans I do not know start calling my dogs to come to them. To me it seems like common sense that it would be a rude behavior on the human’s part. Think about it, seeing a dog on a leash that is held by a person and calling the dog to come to you? It is also very common for a human to sweet-talk a dog from a distance, getting the dog very excited and hard to manage. To the dog that is like calling him. In a lot of cases the human is not saying the words, "come here dog," but it is not the words the dog hears; it's the tone in their voice that is inviting the dog to go to them. 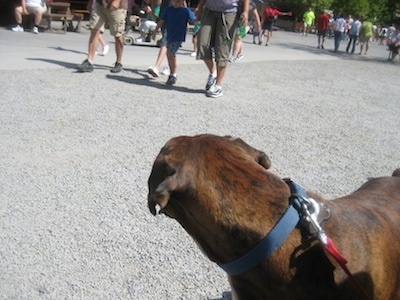 Unfortunately to the typical dog owner this behavior from strange humans does not seem to be as much of a problem because their dogs are already pulling them on the leash. However, for those owners who are actually being responsible and asking their dogs for respect it makes it very difficult. 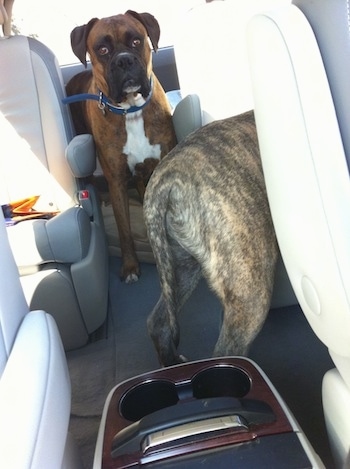 I went through the drive-thru at a fast-food restaurant and my dogs were in the back of the van. The lady taking my money reached her hand into my driver’s-side window with a couple of dog bones and called to my dogs to “come and get it.” Besides the fact that my dogs tend to have sensitive stomachs and I didn't want them eating the bones, the dogs can't get to the front window where her hand was unless they jump over the center console and climb onto my lap, something I do not let them do. I had to quickly say, "The dogs are on a grain-free diet, they can't eat that." The last thing I wanted was to reward them for jumping into the driver’s seat while I was driving, or even thinking about doing it. The dogs are trained to stay in the back for their safety, my safety and the safety of others on the road.

Another behavior from strange humans I came across when my dogs were puppies, and a behavior I am sure many small dog owners come across, are humans asking the dog to jump on them. When a dog jumps on a human it is not respecting and is being dominant over the human. Dogs should be taught to never jump up on or put their paws up on a human. When I was training both Spencer and Bruno not to jump on strangers I often found myself asking other humans to please stop asking my dogs to jump on them. Their typical response was, "Oh I don't mind if they jump on me."

Along with the human asking the puppy to jump on them, I also found myself asking the humans to please not put their hands in my pup’s mouth and encourage them to puppy bite. Again, the typical response from the human was, "Oh it doesn't hurt. I don't mind." I then had to explain over and over again, to human after human, how I was trying to teach the dog not to jump and not to chew on human skin, only their toys and bones. 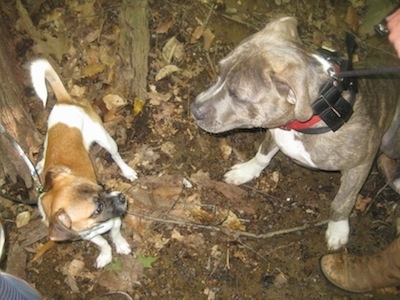 Another human behavior I often come across, which seems to be notorious for small dog owners, is an owner who allows their dog to pull its way over into my dogs face as we pass one another. Often times, believe it or not, the dog is barking and growling as it does so. When I veer my dog away in a different direction some typical responses are, "Oh is your dog not good with other dogs?" and "My dog just wants to say ‘Hi’ to your dog," as their dog continues to pull, bark and growl. 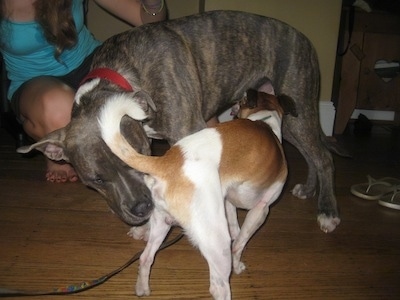 The best way to introduce one dog to another is with a loose leash or all dogs off of the leash so the dogs do not feel confined and restricted. Letting one dog on a leash pull their way up to another dog that is on a leash is one of the worst ways to introduce dogs to one another. When a dog is pulling or walking in front of its human, the dog has in its mind that it is the one who gets to make the decisions. When one of the dogs is already barking and growling as it pulls their way over, this is just asking for trouble and not fair to the dog that is being barked at. It's like sticking your kid in the McDonald’s ball pit with a bunch of bullies and asking them to just deal with it. 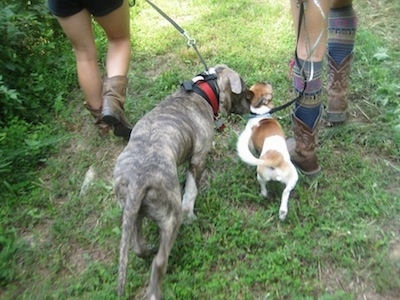 When you introduce dogs that are on leashes, the best way to do so is by going for a walk with all dogs heeling. This will keep all dogs on the same level. The humans need to be the ones in charge, not the dogs. 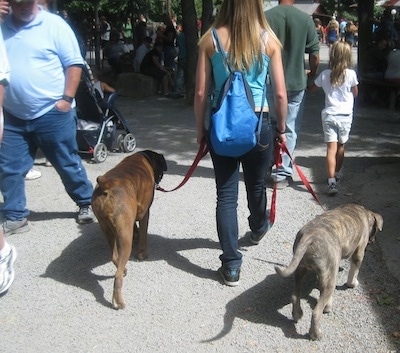 How should a human act when around someone else's dog? When you see another dog that is not your own, stay calm. Don't make eye contact with the dog. Don't do things that get the dog excited. Don't pet the dog unless you ask the owner for permission. If the owner gives permission pet the dog calmly and refrain from high-pitched baby talk and over-excited gestures. 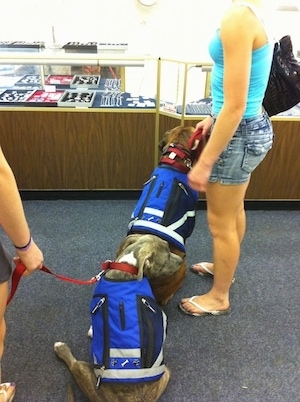 Approaching dogs without permission is a good way to get yourself bitten if the dog happens to be dominant with humans, but even for those friendly dogs it makes it hard on the owner to keep the dog under control when random people keep approaching, creating excitement. 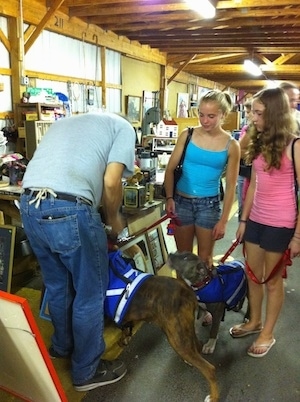 It is that very reason why service dogs who are working are not to be approached by passersby. Even the best trained dogs have a hard time staying calm when humans greet a dog with excitement.