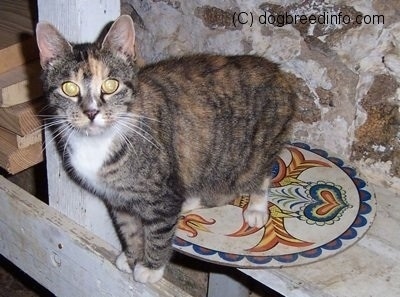 In July of 2002, this cat, who we called Bob for the lack of a tail, showed up at the Maguire Farm. We later found out her real name was Snuffy, however, Bob was the name that stuck. We also found out she was about 14 years old.

Bob moved in and took over, in a nice way, but definitely took over. She became the leader of all the other farm cats and the dogs, for that matter. If there was a bowl of food, and a dog that wanted to eat it, this cat ate first while the dog sat and watched. If I opened the front door to let the dogs out, and Bob was on the other side of the doorway, neither Spike the Bulldog nor Allie the Boxer would pass. Bob would rub against the dogs when she darn well pleased, yet she'd also jump out and swat them for no apparent reason. Allie the Boxer was just a young pup at the time, and if Allie would even look like she was about to chase one of the other cats, Bob would appear, chasing the dog away from HER cat. That's just the way it was. Bob was a brave leader. She was clever, able to get into things most other cats could not figure out, and for four years she ruled the farm. 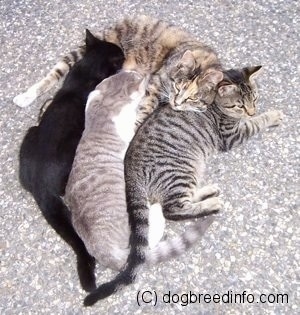 She mothered the younger ones, letting them nurse even though they were too old and she didn't have any milk to give them. Bob never had any kittens of her own, however, all of the other cats at the farm were treated like they were hers. She'd protect them, and chase away anything that threatened them. 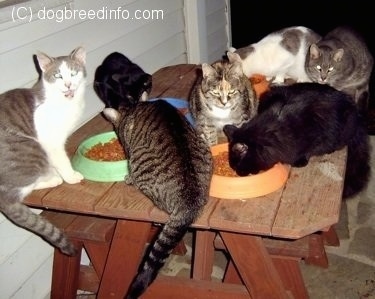 In May of 2003 a raccoon jumped up on the cat table to eat his dinner. All of the other cats jumped down, however, Bob decided to stay and stand her ground. That was her food, her table and her cats around her. Needless to say, a small farm cat is no match for a raccoon. Bob put up a good fight, but she lost.

Bob's leg was cut and it soon became infected. She was taken to the vet, where we were told her prognosis was not good. Her body was full of pus from infection, which had spread to more than just her leg; her entire lower body was a sack of pus. The options were to put her down right there, or to operate by opening up the wound, allowing the pus to drain from her body, and give her a massive dose of antibiotics. Even with that, we were told her chances of living were very slim. The vet had not seen an animal with an infection of this magnitude that had survived. Bob was an old cat and her injuries were extensive.

She was not our cat, but she also had not gone home in a year, so I made the decision to operate... 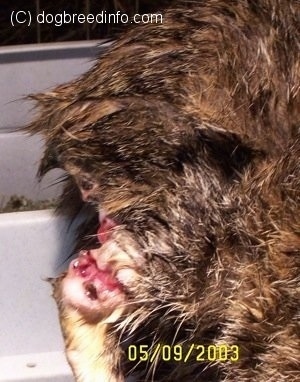 This is Bob after her first operation. Her wound had to be kept open so it could drain. Every time it closed the pus would build up inside her. She was put on a high dose of antibiotics. This injury had to be soaked in warm Epsom salts to suck out the infection and prevent it from traveling throughout her body. Her wound would close up and form a pocket of pus. If not drained, it would once again begin to spread. She had to be opened back up four times, twice by the vet, and twice by my friend Piper and I. The vet had lent out his scalpel. It was a nasty job, but it needed to be done to save the cat. Imagine being Piper and getting the phone call, "Can you please come over here and help me cut open a cat so a pocket of pus can drain out?" What a trooper, she actually showed up and went through with it. Not once, but twice! :) 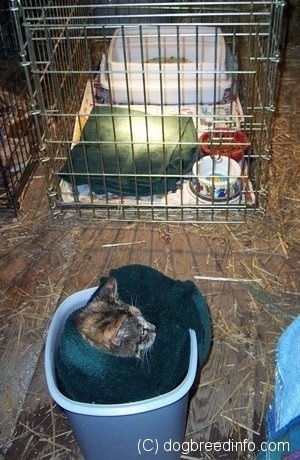 Bob was kept in the barn inside a crate. Religiously, I went out to the barn and soaked her entire body for 20 minutes in the Epsom salts, morning, noon and night for five weeks straight. 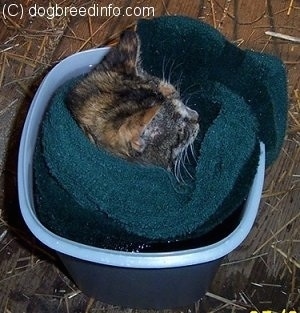 Amazingly enough, she went into a calm trance when placed into the water. If you have ever soaked your hand in warm water with Epsom salts, you will know it has a soothing feeling to it. 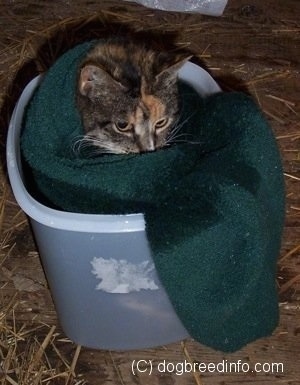 Bob soaking in warm Epsom Salt water; I believe she actually enjoyed it. She never hissed, never tried to bite, never growled and never tried to get away from me. I made sure the barn was quiet when Bob went into the water so she could relax. 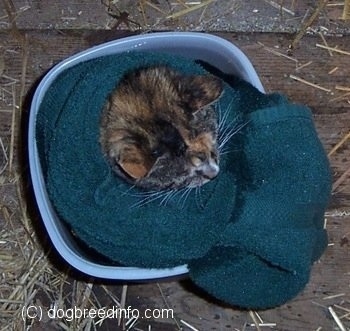 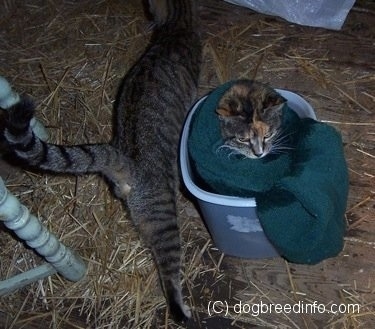 The other barn cats would hang out with her. This is Tigger rubbing up against Bob's container. 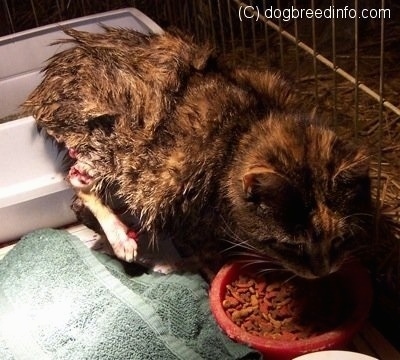 It was a slow process, but she was getting better. A heat lamp was placed on top of the crate to keep her warm after she came out of the water. Bob's leg a month and a half into the treatment. At this point she was allowed to come out of the barn and was soaked once a day. She still had an infection, so she was still on antibiotics. She spent the nights in a cage on the porch. The other farm cats would sleep in there with her at their own free will. I'd open up the crate and other cats would go in and lie with her. If I opened the door again, they would not leave. Sometimes I had to remove a few cats, as there would be too many cats in such a small crate. Everyone wanted to sleep with Bob. She eventually made a full recovery and once again ruled Maguire Farm. 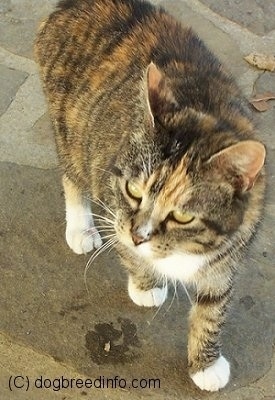 Three years after the raccoon attack and four years after she first appeared on the farm, Bob died of what seemed to be a stroke. She was about 17 years old at the time. I have yet to meet another cat like Bob, aka Snuffy. She was truly one of a kind.