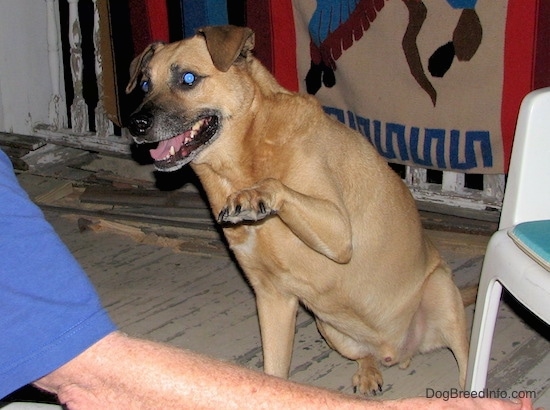 One of the most common mistakes an owner can make with their dog is to misread what the dog is saying into something completely different. We humans do it all of the time. The dog's body language says one thing, and we interpret it into something completely different, basing our assumption on what we ourselves are feeling. In reality dogs see and read the world much differently than we humans. If we humans better understood our dogs, we could prevent many dog bites and other behavioral issues. 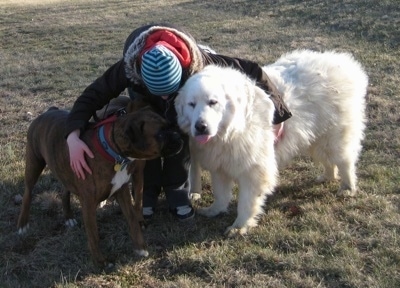 For example, let’s take a simple act of a hug. To humans, a hug means love and affection. When a human receives a welcomed hug from a loved one it makes us feel good inside. 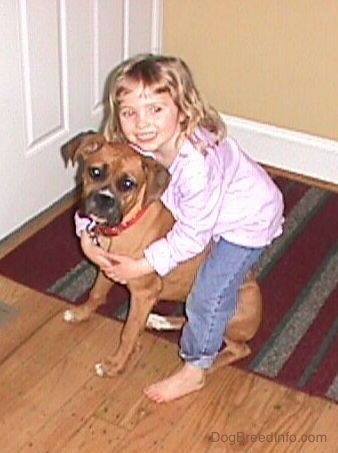 But just what does a hug mean to a dog? Humans are always hugging their dogs and when we do, we are giving the dog affection and sharing our love. However, what most humans do not realize is to a dog, a hug is not affection at all. To a dog, a hug symbolizes a social status ranking as dominance and an invasion of space—lower members of the pack give space to the higher members to show respect. The position of the body is also meaningful to a dog. The one on top represents a higher status ranking. Therefore, when you bend down and wrap your arms around a dog you are not only on top, but you are in their space.

Keeping this logic in mind, it makes total sense to not run up and hug a strange dog. Many children are bitten every day by hugging dogs, and if you look at it from the dog’s perspective, who would blame them? A stranger runs over, asserting dominance on a dog they have just met and the dog's reaction is to communicate to this being that they do not wish to be dominated. Unlike horses and deer who are "flight animals," a dog is a "fight animal" and will communicate his displeasure with a growl and/or a snap or bite. 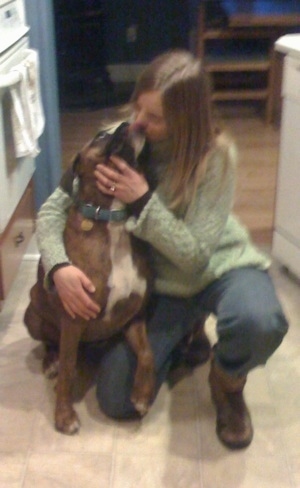 That being said, it is not bad to hug a dog that is familiar with you if the dog is calm and in a submissive state of mind, so long as you are hugging them at a time when you are relaxed and happy. As a matter of fact, the emotional sensation humans receive from hugging can be felt by the dog, and that energy radiating from the humans can be very calming to the dog. Not because the hug has the same meaning to the dog, but because he is enjoying the calm he feels coming from you. 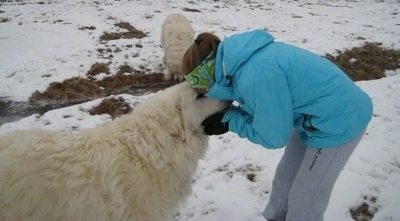 I watched a little girl run over to a dog, and then give the dog a huge hug. The little girl was overjoyed. You could tell she really loved dogs. I watched the dog's face. The dog's eyes were wide and he went somewhat stiff as he turned his head up toward the being who was wrapping his arms around him. I saw him flick his tongue in a nervous way. While this dog did not bite this child, it was clear the dog was not enjoying it. Had the child been hugging a more dominant dog, the dog may have snapped at her.

I then watched the child hug a second dog. The second dog was Bruno. Bruno lowered his head and allowed himself to be hugged. He, like the first dog, also flicked his tongue, but in a different way. His tongue came all the way out and went back in as he tried to lick the child. His lick was submissive whereas the first dog's lick was nervous. Bruno enjoyed the attention; he is about as submissive as they come and enjoys any attention from any human he can get.

When you allow your children to hug strange dogs you are taking a gamble on the dog's reaction. Not even the owner can always predict what the dog's reaction will be. The proper way to greet a dog is to turn your body sideways, no eye-to-eye contact, and allow the dog to smell you. This is how you greet a dog in dog language in a non-confrontational way.

This video clip gives an example of how a balanced dog will act. The first part of the clip shows when I first went downstairs in the morning. The dogs are calm and not over-excited. The second part of the clip shows the same dogs getting fed. They are just as calm at feeding time. At the end of this clip is a great example of canine communication. At 3:17 you can see a conversation going on between the dogs. Spencer the Pitbull comes over, hoping to lick Bruno's bowl clean. Bruno tells him no. If these two were human brothers here is how the conversation would have gone.

Bruno: No, you cannot lick my bowl clean. Absolutely not. You best be getting back over to your own side.

Spencer: Oh, OK. I see...yep, not such a good idea, after all. I'll just go back over to my side and lick my own bowl again.

Here is another good example of how we humans assume our dogs have the same emotions and feelings as we have and put our own interpretations into a dog’s reactions. This is a clip of Bonnie Hunt giving her interpretation of this baby crawling over to the dog. Notice the emotion the clip draws from the human. The talk-show host assumes the dog was bonding and acknowledging in a heartfelt, loving kind of way. The host is so moved by what is in that clip that she looks like she could cry. She is overwhelmed with joy about what she believes is an emotional tie between the baby and the dog.

A lot of humans are going to watch this clip and attach their own emotions to what THEY interpreted the dog was feeling at the time the dog touched the baby with his paw. But what is the dog really communicating? Is he overwhelmed with emotion because the cute little baby crawled over and connected with him? No, not at all. When the baby first crawled over and touched the dog's paw, the dog sat up and looked to see what was touching his foot. The dog, seeing it was the baby, submitted by lying his head down. When the baby touched the dog's paw, this submissive Boxer saw it as a game and continued to play with the baby. But there was no heartfelt, emotional tie in the dog's mind like the announcer read into it. The dog did not feel strong affection when the baby touched his paw. The dog did not touch the baby back to show his reciprocated love, it was just a gentle game. The dog was playing. Notice the dog yawned. When a dog yawns it does not mean they are tired. It indicates a dog is either thinking, is unsure or is trying to figure something out. One thing we can all agree on is this clip is adorable and that Boxer is a very good dog.

When Bruno is lying down and I touch his feet he'll do the same—he’ll start to move his feet because he thinks it’s a game we are playing, not because he is emotionally connecting with my touch. Here is a clip where I touch Bruno's foot with a clothes hanger. Bruno sits up. When I touch his front foot with the hanger, he paws at it much like the Boxer who put his paw on the baby's hand.

I often hear people say that when they correct their dog for a bad behavior, the dog sulks, leaves the room or turns his head because the dog is "upset." The humans interpret this behavior as the dog's feelings being hurt. They feel bad and believe they need to "make up" with the dog.

What is the dog really saying? If you correct your dog and he turns his head or leaves the room, he is giving in to you and accepting you as his leader. Giving space and turning away from direct eye contact are submissive behaviors. When humans try and "make up" with a dog after the dog has given in to you, it sends mixed signals to the dog.

Allowing a dog to lead

Everywhere I go I see people letting their dogs lead them on the leash. I see the dogs being misread in the communication. Recently I saw a lady with a fairly large Shepherd/Husky puppy and she just let the puppy pull her on the leash. This is telling the pup that you are letting it be your leader…then the owners expect the pup to listen to them?? The pup was looking at everyone, whining. That was anxiety and probably related to the owner letting her pup lead. When a dog leads, you are giving it the responsibility of taking care of the pack. That is a lot of weight to put on a pup’s shoulders. The pup was trying to jump on everyone it saw; that's disrespect—followers do not jump on leaders. Of course, this pup was told it was the leader. The owner attempted to correct this behavior by saying the dog’s name over and over again. You should not use a dog's name when correcting because it will then associate its name with something that you are unhappy about. When a pup tries to jump, give a quick tug down and to the side. You can say "down" or you can say nothing at all. It can all be body language. This gets the dog's attention, unlike yelling over and over again. Then she walked away and let the dog lead her. Do you know how confusing that is for a dog when you let them lead, but tell them what to do at the same time? No wonder the dog was anxious.

These examples are just the tip of the iceberg. Humans misread their dogs on a daily basis and on a wide scale of issues. I can't even imagine what it is like for a dog to be constantly misread and how confusing it must be for them. Most dogs do not wish to be the leaders, do not wish to run the show. They only wish to be secure with their pack and clearly know their status. However, they will take over when they do not see the humans as stronger than themselves. We humans would do our dogs a huge favor by trying to better understand them rather than assuming they are just like us.