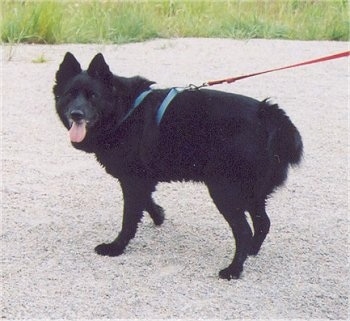 The Black Norwegian Elkhound is a sturdy, medium-sized spitz-type dog. The body is short and squarely built. The back is straight and strong. The wedge-shaped head is broad at the ears. The muzzle is thicker at the base and tapered, but not to a point, with a clearly defined stop. The teeth should meet in a scissors bite. The medium-sized, oval-shaped eyes are dark brown. The ears are set high on the head, firm but very mobile. The chest is deep and relatively wide. The legs appear straight from the front. The oval paws are small and tight with thick pads. The tail is set high, tightly curled over the back. There are usually dewclaws on the front legs but not on the back. The weather-resistant, double coat is thick and hard. The coat is solid black, sometimes with a very small amount of white on the chest.

The Black Norwegian Elkhound is fearless and friendly. Although some may be somewhat reserved with strangers, it will greet family and friends it knows with enthusiasm. They are reliable, energetic and alert companions for children and make sensible guard dogs. It is clean and docile with an outstanding character. They are affectionate and loyal, engaging and sensitive. Like other Arctic dogs, the Black Norwegian Elkhound has a mind of its own and is fairly independent. It may be somewhat resistant to obedience training. It is important to be firm with this dog, showing good pack leadership. Puppies need firm but gentle discipline. Be fair when training this breed, understand it is a canine, not a human and treat the dog accordingly. They have been bred to hold prey at bay, barking constantly until the hunter arrives. Some Black Norwegian Elkhounds bark a great deal and must be taught enough is enough; after they alert you once, it's time to quiet down. They also have a tendency to roam. It is best to pair sled dogs in teams of one male and one female, as males have a tendency to fight if harnessed together if they are not 100% sure of their follower place in the world. They may also be aggressive with same sex dogs in the household if owners are not showing strong pack leadership skills with the dog, but this tends to be the exception rather than the rule. Some sources say Elkhounds are usually good with non-canine pets, others say they shouldn't be trusted so use caution. Without enough mental and/or physical exercise they can become high strung. Be sure to make the dog heel when on a walk beside or behind you, never in front, to reinforce the human is alpha over the dog (pack leader goes first).

Prone to hip dysphasia, pyotraumatic dermatitis and PRA. Occasionally seen is Fanconi syndrome. Do not overfeed this breed as it tends to gain weight quickly.

The Black Norwegian Elkhound will be okay in an apartment if it is sufficiently exercised. It is fairly active indoors and does best with at least a large yard. Elkhounds prefer cool climates.

The Black Norwegian Elkhound is a very energetic dog that thrives on strenuous activity. They need to be taken on a daily, long, brisk walk or jog. While out on the walk the dog must be made to heel beside or behind the person holding the lead, as in a dog's mind the leader leads the way, and that leader needs to be the human. It should have at least an hour of exercise a day. It will enjoy a running beside your bike or a really good run in the woods, but remember that these dogs like to roam. If it picks up an interesting scent, it may ignore you when you call it.

The hard, coarse, weatherproof coat is easy to groom. It should be brushed regularly, with extra care given while the dog is shedding its dense undercoat. When the dog is shedding, the dead hair clings to the new hair. The dead hair should be removed with a rubber brush or a wooden comb with a double row of metal teeth. Brushes and combs just for this purpose are sold in pet stores. Bathe only when necessary, as it removes the natural oils in the skin. Like other Arctic dogs, they do not have the usual smell of dog hair. The coat is both water and dirt resistant. This breed is a seasonally heavy shedder.

The Black Norwegian Elkhound originated in Scandinavia and is one of the most ancient breeds; it is thousands of years old and has been around since the Stone Age. A skeleton similar to today's Black Norwegian Elkhound dating from 4000 to 5000 BC has been found. To put some perspective on it, these dogs have been around since man hunted with slingshots and lived in caves. They worked as hunting and guard dogs for the Vikings. The dogs were used as big and small game hunters, tracking animals such as moose, elk, bear, mountain lion, badger, lynx, wolf, reindeer and rabbit. The dogs would track the quarry and alert the hunter by barking, holding the animal at bay until the hunter arrived. Norwegian Elkhounds can smell game from over a mile away. The dogs tended to work better at night than in the daytime. The breed is also highly prized as a sled dog. In case of war, the Norwegian Defense Minister has the power to mobilize all privately owned Elkhounds. In more recent times, the friendly and reliable character of the Elkhound has helped win a place in many homes as a cherished family pet. The name "Elkhound" is a direct translation from its original Norwegian name "Elghund," meaning "moose dog." In Norwegian, "elg" means "moose" and "hund" means "dog." Some of the Elkhound's talents include: hunting, tracking, herding, watchdog, guarding, sledding and agility. There is also a more popular standard gray Norwegian Elkhound that is recognized as a separate breed, but is almost identical in type except for color. 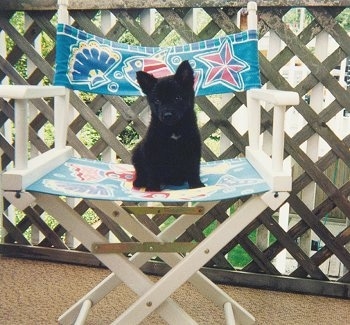 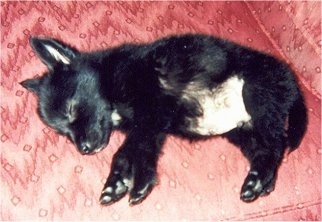 Bandito the Black Norwegian Elkhound as a young puppy 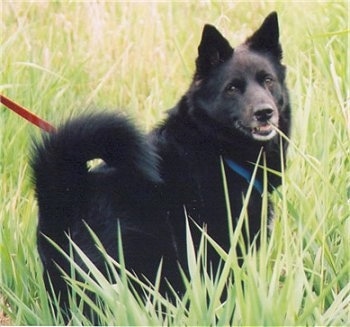 Bandito the Black Norwegian Elkhound as an adult

Bandito the Black Norwegian Elkhound and the cat 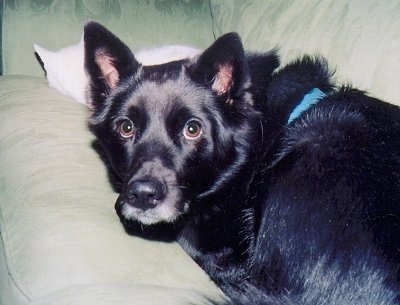 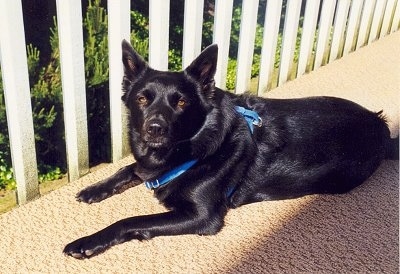