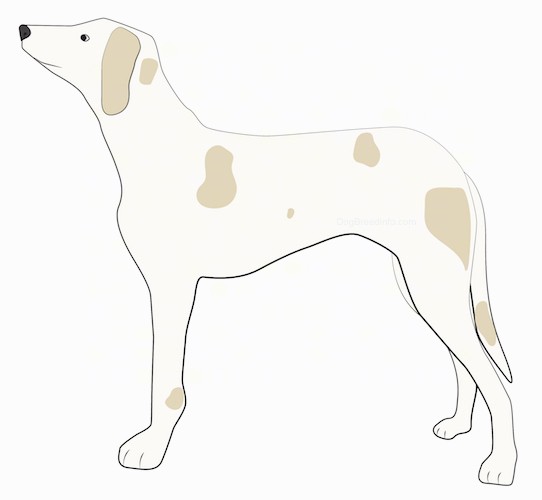 Crossed between a sight hound and a pointer, the extinct Braque De Puy had a very thin build with slim legs and a long, slight tail. For a medium sized dog, they stood around 25-27 inches tall and weighed about 35-55 pounds. The muzzle held tight lips with a narrow, sleek head much like other sighthounds. Medium length ears hang low on the side of their head and a short coat covered their body. Braque De Puy’s were known to be completely white with tan or slightly darker markings on the fur.

Stubborn and bull headed, these dogs were not for everyone. They were better suited to hunters than as a stay at home family dog. They were great with all people including children. It was not recommended to leave them alone with other small animals. Because of their strong hunting and instinct, they may have found it difficult to see the difference between a pet and a kill. Once these dogs were trained, they were well versed in listening and paying attention to their owner because of their keen sense of sight and hearing.

While this breed was known to be a strong and healthy dog, some concerns to look out for were joint problems such as hips and elbows, bloating, skin allergies, and possible eye infections. Their ears and toes were also rumored to be prone to infections so it was crucial to keep them cleaned and disinfected.

Because these dogs were bred for hunting, they required an open field or outdoor area where they can run and play. They were popular in the marsh lands of France, hunting small birds and animals as pray, so they always had land to adventure through.

These dogs required a lot of exercise, especially because they were bred for the hunt. Known for their speed and agility, they required open space to run and play. While they did need a high level of physical exercise, it was equally important that they were provided with mental stimuli. Braque De Puy’s were highly intelligent and thrived when being taught new tricks.

Since they had relatively short coats, no major grooming was required.

Although not much is certain about the Braque De Puy, historians know that this breed originated in France around the 1800’s and were one of many varieties of the Braque breed (also known as pointers). No one can agree whether the Braque De Puy were related to Portuguese, Spanish, or English pointer. Others believe the Braque De Puy were directly related to native French hound dogs. Braque De Puy’s were bred for their keen sense of smell in order to point their owners to the direction of birds for hunting. After the bird that the Braque De Puy pointed to was shot, the dog would run after the bird and fetch the dead animal for the owner. Again, there is no evidence of how these dogs came to be. Some say they were crossed with a Levriers, or a sight hound, mixed with a Braque Francais which is a mix of a sight hound and a pointer dog, also known as a Braque.

There are a few stories of who created the Braque De Puy breed. One tale says this breed was created by two brothers by the name of Homere and Narcisse, both with the last name either being Dupuy or du Puy. The boys owned a Braque Francais and a Sloughi which was from North Africa. The pup from these two breeds was named the Braque De Puy.

Another story of which there is also no evidence of, is about a gamekeeper in France called Puy who worked as a loyal servant to the King of France. His job was to watch over a kennel of French Setters during the French Revolution. When the French Setters eventually became extinct in most of France, Puy began breeding the last of the French Setters with other breeds, one being Braques. The new dog breed name became known as Braque De Puy in his honor.

Despite these two possible stories, the name Braque De Puy may not be in honor of anyone but simply a term used to define volcanic hills in France. There are also many locations in France named Puy, as it was a possible name. It is also possible that these dogs were first bred in one of the various locations with the same name.

Because the Braque De Puy had such regal features, they were very popular in France, especially along the marsh areas in the west coast. Some locals say that the breed was there before 1808, which is when others say that is when they were first bred.

Although the breed was immensely popular among sportsmen in France, they were not popular in other countries. As both World Wars came around, the breed was knocked out along with many other major French dog breeds. In the 1960’s, people wanted to revive the Braque De Puy but it is uncertain whether the breed was the same as it was years prior.

Many declare that the breed was completely extinct after World War II, while others say the Braque De Puy lived on well into the 1970’s and then died off. Few others say that the breed still exists today within remote towns in Europe. While there are still breeders who claim to sell the Braque De Puy dog breed, it is likely that those dogs are simply re-creations that resemble the extinct breed. 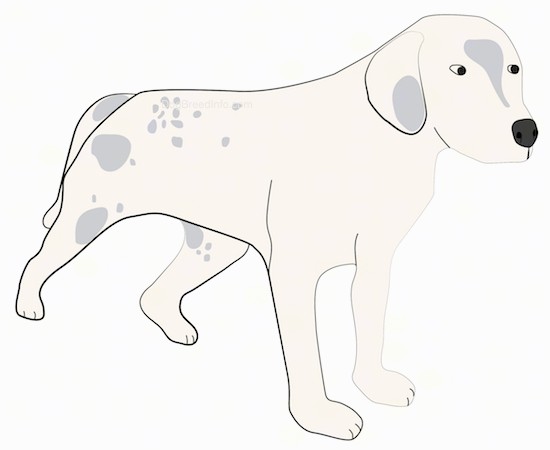