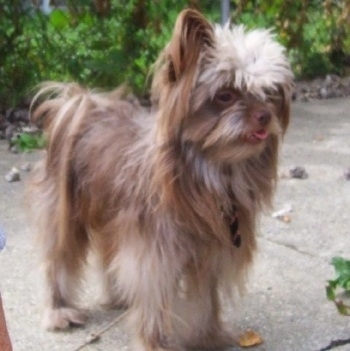 The Brusselranian is not a purebred dog. It is a cross between the Brussels Griffon and the Pomeranian. The best way to determine the temperament of a mixed breed is to look up all breeds in the cross and know you can get any combination of any of the characteristics found in either breed. Not all of these designer hybrid dogs being bred are 50% purebred to 50% purebred. It is very common for breeders to breed multi-generation crosses. 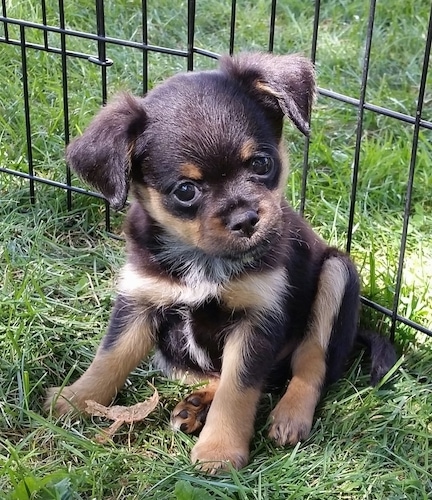 "This is Sprout, a Brusselranian shown here as a puppy at 6 weeks old. His mom is a blond Pomeranian and dad is a Brussels Griffon." 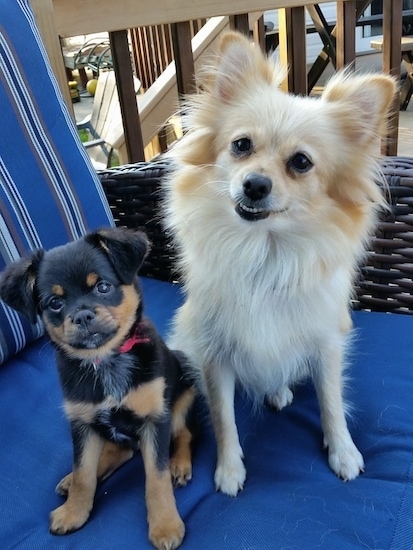 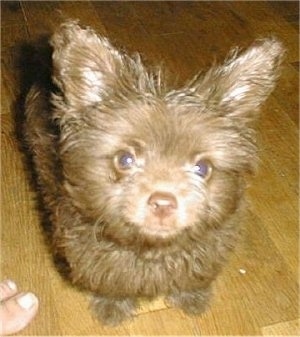 "Hi! My name is Fudge and I am a happy 6-month-old pup in this picture. My mother is a toy Pomeranian and dad is a Brussels Griffon. My hair color is awesome! I am this fudge brown with a touch of white/gray, then brown again. My hair is kinda wiry, but soft to the touch. I have this cute heart-shape of white that traces my face. I have brown eyes with a hint of topaz. Some say I look like an Ewok!" 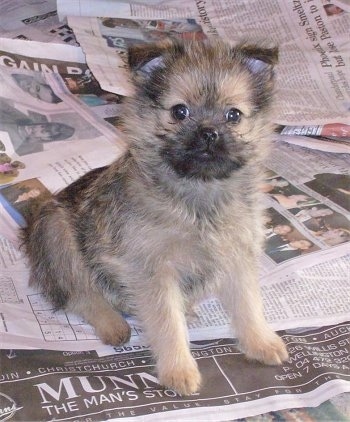 Digit the Brusselranian (Brussels Griffon / Pomeranian mix breed dog) puppy at 9 weeks old—"This is our gorgeous 9-week-old puppy named Digit. He is named Digit due to his finger and toe fetish! He is described as being a red sable rough-coat Pomgriff (or Grifferanian, which we don't like as much!). He has a gorgeous little black beard that juts out from his little muzzle. His father is a black Pomeranian and his mother is a rough-coat Brussels Griffon. In these pictures he is nine weeks old. He is the most sweet-natured little fellow, always wanting to play, very energetic and quick to learn. He gets frequent attacks of the 'zoomies'—he races around ecstatically with his tail in the air and his eyes happily glazed! When we first brought him home one of his favourite games was to hide under our big couch and dare us to come get him. Now that he has got too big to get under the couch he sticks his head under it and barks at the space. Everything's just a big game. He is incredibly intelligent and sociable, enjoying meeting new people and loving children. Within the first two weeks that we had him he got the hang of housetraining, fetch, and (due to his rather tiny stature) how to jump on our feet so that we could raise them and he could climb up for cuddles!!! He loves traveling in the car and he's doing his best to bring the cats he lives with around to playing with him. He has a sheepskin which is one of his favourite things, and he loves toys that we can put his food in—he's very fast at working them out! His dislikes are loud noises, especially trucks. He also massively dislikes the dryer and washing machine and will bark at them like crazy. To all appearances he will not reach more than twice the size in the picture, about 2 - 2.5 kgs at most (4½ -5½ pounds)." 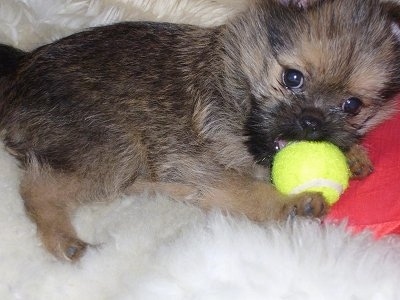 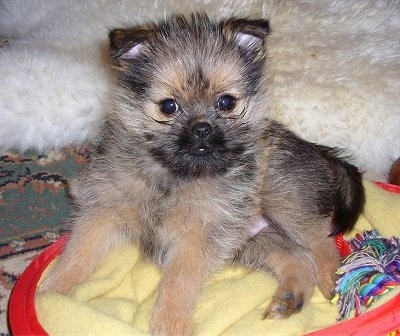 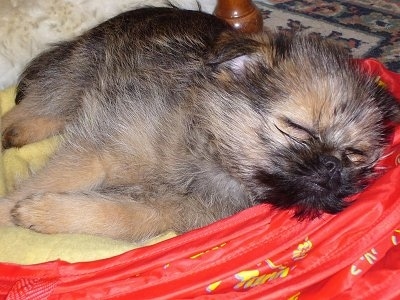 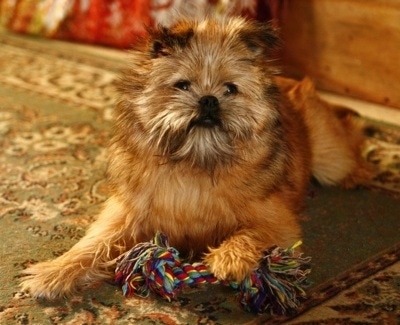 Digit the Brusselranian (Brussels Griffon / Pomeranian mix breed dog) full grown—"Digit far outstripped our expectations for his growth and has reached an adult weight of 4.2 kg (approx.9 lbs.). He is a bright little dog and picks up all training quickly and happily. We also have to keep him regularly clipped as his coat is very thick like his Pomeranian dad, so he gets very hot indeed in our temperate climate. When he is clipped everyone thinks he is a purebred Griffon!" 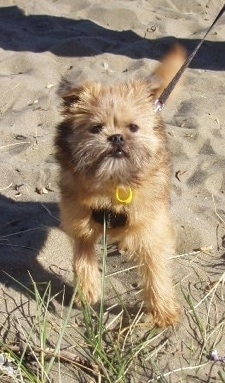