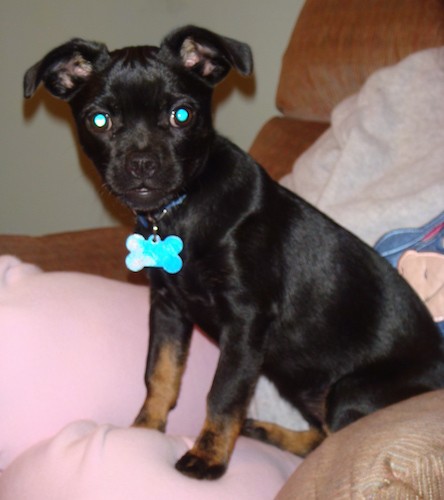 "Casey is a hybrid dog shown here as a puppy at 4 months old. Her mother was a purebred Toy Fox Terrier, and her father a purebred Brussels Griffon. This is the first time I have ever seen this combination of dog."

She is a very hyper dog, who loves to run around our house at full speed. She loves to play with rope toys, and she tears them to shreds within hours of getting one. She is definitely a chewer of everything, and loves to dig into the fabric of our couch, sometimes wearing holes in furniture. When we first got her, she chewed so much, she literally ate our new sofa.

On the plus side though, she is very affectionate, and loves to give kisses. She sleeps in bed with my husband and I. She burrows herself under the blankets, and sleeps between us by our feet.

We have two cats as well, and Casey has taken up some mannerisms of them. She kneads the blankets before getting into bed, and she has taken to pouncing on things around the house just like the cats do.

She is now 15 months old, and has started to calm down a bit, but she still has her hyper moments. She loves to go outside for walks, and we take her for these walks about 5 times a day."