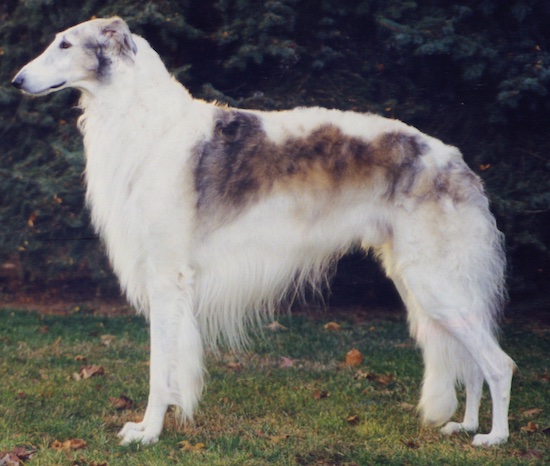 The Borzoi is similar in shape to the Greyhound. It has a narrow, slightly domed head with almost no stop. The long muzzle is slightly arched. The teeth meet in a level or scissors bite. The large nose is black. The dark eyes have a slant to them. The small ears lay back on the head. The back line is arched slightly upward and the chest is narrow, but deep. The front legs are straight. The tail is set low with a curve. The coat is long, silky, flat or wavy. The hair on the neck, hindquarters and tail is longer than the hair on the rest of the body. Comes in any color or combination of colors; common colors include black, white, tan, tan or gray with black markings, golden in either solid or mixed colors.

The Borzoi is a sweet, intelligent dog. It is proud and is extremely loyal to its family. It is quite affectionate with people it knows well. They can be trained in obedience, but it should be remembered that they are hounds, and as such are more free-thinking and less willing to please humans than some breeds. They are, however, very intelligent and capable learners. The training of this breed needs to be gentle, but firm and consistent. The Borzoi needs an owner who displays a natural authority over him, making the rules of the home clear and confidently sticking to them. Borzoi often appear to be cat-like in that they keep themselves quite clean. They are quiet dogs, rarely barking. Like all other sighthounds, they are very fast and have little to no territorial instinct. Therefore, they cannot be trusted off leash, unless in a securely fenced or very safe area. If they get sight of a small animal they may take off after it and not even hear you calling them back. They are good with other dogs but should be supervised with small non-canine pets such as cats, rabbits, guinea pigs and hamsters. Spending time outdoors with small animals is not advised. Socialize them very well with cats and other pets at as young an age as possible, but remember the Borzoi will always be a hunter that may race after a fleeing animal. The Borzoi is a noble dog that gets along fairly well with children, but it is not ideally suited for being a child's companion as it does not take well to roughhousing play. During the growing stage, these dogs need a highly nutritional diet.

Prone to bloat. Large meals should be avoided, but rather should have small meals two or three times a day. Avoid exercise after meals. Sensitive to drugs.

Will do okay in an apartment if sufficiently exercised. They are relatively inactive indoors and are so peaceful it might escape notice, but outside they need plenty of space to walk and run—so they will do best with at least an average-sized yard. In the city he should only be let off the lead in a safe, enclosed space.

To maintain their fitness these dogs need plenty of exercise, including a long daily walk and regular opportunities to run off the leash, however in some countries it is forbidden to allow all the dogs in this fleet-footed hunting category off the leash. The Borzoi make excellent jogging companions and usually enjoy running alongside a bicycle but beware, a Borzoi is quite likely to shoot off after any prey it catches sight of. If this happens you will need to react very quickly.

Average of 6 puppies, however can be anywhere from 1 - 11 puppies (1 pup in a litter is common)

The long, silky coat is easy to groom. Brush regularly with a firm bristle brush, and dry shampoo when necessary. Bathing presents a problem with such a tall dog, but shouldn't be required very often. Clip the hair between the toes to keep the feet comfortable and to stop them from spreading. This breed is a seasonally heavy shedder.

The Borzoi was bred for hundreds of years by Russian nobility. They were developed by crossing the Arabian Greyhound with other longer haired Russian sheepdogs. The dogs were called Russian Wolfhounds in America up until 1936 when the name was changed to "Borzoi," coming from the Russian word ”borzii,” which means swift. Fierce on the hunt, this sighthound was used for hundreds of years to hunt wolves, fox and hare in the open planes of Russia. As the breed became more popular it was used more and more as a companion dog and its temperament became more docile. The Borzoi was recognized by the AKC in 1891. The Borzoi’s talents include hunting, sighting and lure coursing. 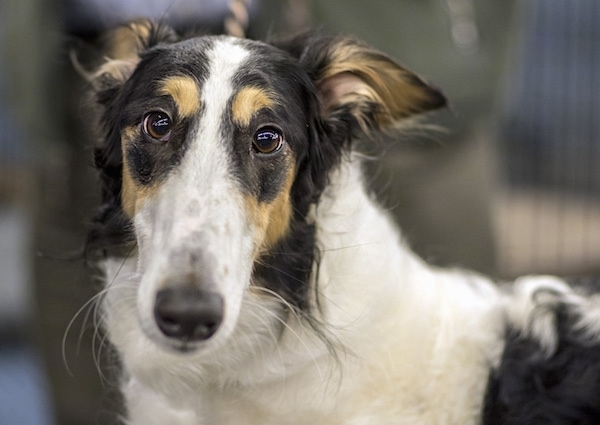 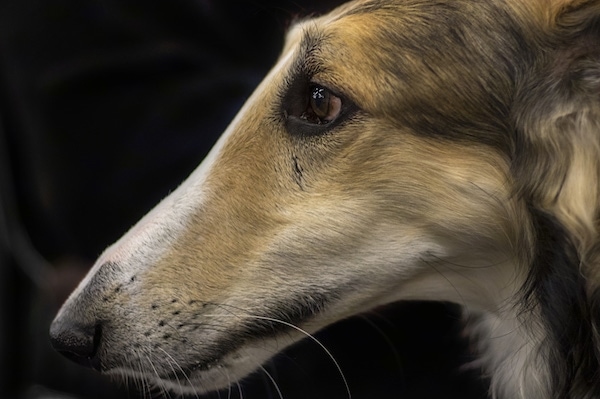 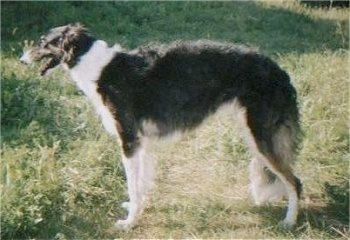 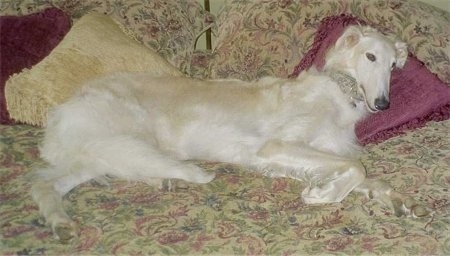 Gandalf the 2-year-old Borzi is a real sweetheart! 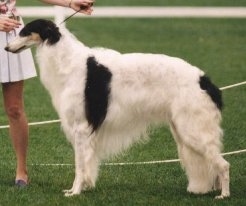 This is CH. Swiftess Brother to Dragons, photo courtesy of Swiftess Borzoi, Ken and Sandy Cook, Borzoi of Extreme Elegance 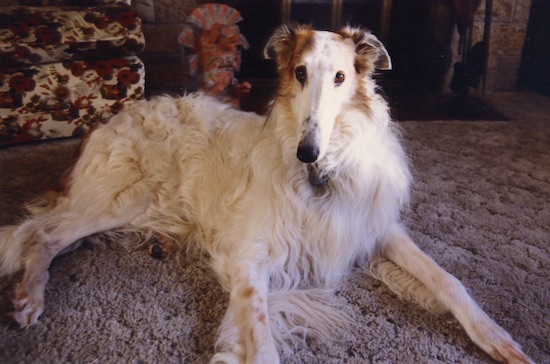 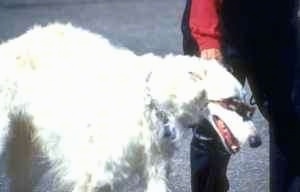 Adult Borzoi with glasses on 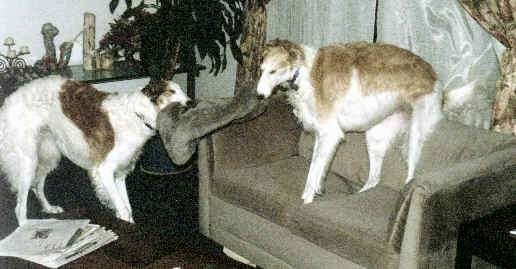 This is Elf (red) and Pippin (apricot). They love using a bed as a tug-of-war toy. 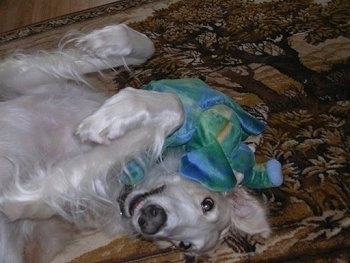 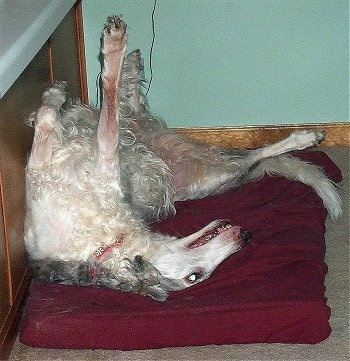 Dreamer, a Russian Wolfhound (Borzoi)—"I inherited him after my mother died 1 ½ years ago. We spent 2 weeks trying to find him (he'd been taken by Animal Control. My mom died in her sleep with him home). I happen to be a cat person, but my husband has always been a dog person. We took Dreamer home and after a couple adjustment weeks, he became the family dog. He was a very sweet, not so smart, nor graceful dog—but we grew to love him. Unfortunately, this past June, we had to have Dreamer put down. He had developed peri-anal auto-immune disease. It had gotten too painful for him to "do his duty." It was a very, very sad day. But I have this and many other photos to remind us of what a sweet goof he was."