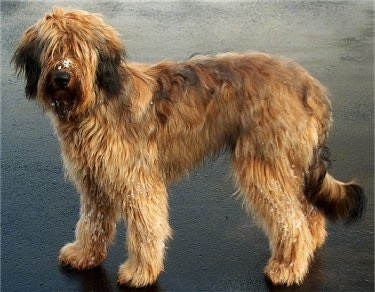 The Briard is a large, powerful herding dog. In males, the body is about the same length as the height, but in females the length may be slightly longer. The topline is straight. The head is large, long and rectangular in shape. The wide muzzle has a long mustache and beard. The stop is well marked. The square-shaped nose is black with open nostrils. Teeth meet in a scissors bite. The large eyes are set wide apart and come in black or black-brown with very dark pigmentation along the rims. Eyes are covered with hair which cascades to the rest of the body. The ears are either cropped or left natural, set high, not lying flat to the head. The legs are powerful with strong bone. The well-feathered, low-cut tail has a J-shaped crook at the end. The feet are large, compact and round. The nails are black. The dog usually has double dewclaws on the hind feet and they may or may not be removed. The Briard has a double coat. The outer coat is coarse, hard and dry, lying flat and falling naturally in long, slightly wavy locks. The undercoat is fine and tight all over the body. Coat comes in all colors except for white. Common colors include black, various shades of gray and various shades of tawny. The tawny coat usually lightens from the time the dog is born to the time it is a year old, when the coat deepens to a richer adult color. Adult coats are 6 or more inches (16 cm) long, giving the dog a bushy look with a shaggy beard, eyebrows and mustache.

The Briard is a farm worker by nature and lives to herd anything, possessing an exceptional hearing ability. It is kind, but with a strong protective instinct. The Briard makes a wonderful, alert watchdog. Sensitive, playful and obedient, but with a definite mind of its own. A long history of working with humans has left it gentle and sweet-natured, as well as loyal, brave and fearless. This breed has a fine memory and is intelligent with a lot of ambition. The Briard is very trainable, willing and eager to please. It needs a firm owner who is able to display leadership at all times. This is definitely not a breed for everyone. Too often they wind up in shelters because people don't realize what a challenge they can be to raise and live with. If they sense the owner is letting up on the authority at all they will become very stubborn and can be fearful, extremely unfriendly, or both, if not treated like a dog. They not only need a lot of leadership, but they need entertainment and activity to be happy, and are not the sort you can pat on the head and ignore the rest of the day. Briards are really dedicated to their families and tend to be, at best, disinterested in other people. They should be socialized early—especially with children. They are good-natured and very adaptable to living with children if they are raised together. This breed does not like to be teased. Train them early and treat them with an air of leadership along with exercise first and then affection, and you will have a wonderful family dog. It has been said, "it returns tenfold any affection given to it." Affection should only be given when the dog is calm and in a submissive state. Training must be consistent with patience and a firm hand. Owners need to be stern, confident and consistent. They will not respond to unjust harshness. Dogs in general do not respond well to or understand anger. Firmness they do definitely need, but not anger. With poor handling and training the Briard becomes withdrawn and even aggressive. They require regular leadership, training and attention. If you are a first-time dog owner and you would like to raise a Briard, be sure to research the breed extensively before adopting. Briards view strangers as suspicious and can be a bit dog aggressive, but with the right handler it will blossom into a first-class pet that can happily coexist with other pets. Briards may attempt to herd people by nipping at their heels, and need to be taught not to do this.

Generally healthy, but some lines are prone to PRA, cataracts and hip dysplasia. Briards, like other large-chested breeds, can experience bloat and stomach torsion. The condition can come on very fast and, if left untreated, is fatal.

The Briard will do okay in an apartment if it is sufficiently exercised. They are moderately active indoors and will do best with at least an average-sized yard. This dog is totally not suited for life in a kennel. They are happiest in the home as part of the family, but they do love to be outdoors.

The Briard is a working dog and will become restless and can develop behavioral problems if not exercised enough. They need to go on a long daily walk, or run alongside your bicycle. They make an excellent jogging companion and also enjoy a good swim. They are ideally suited to defense dog/police dog trials.

The Briard's coat is coarse and strong, similar to a goat's coat. Dirt and water do not readily cling to it, and if well-groomed it sheds very little. Take time for grooming to have an attractive and healthy dog. Expect the minimum time required to be two hours a week and much longer if you have been remiss. The well-groomed Briard is a beautiful animal, and, more important, a comfortable one. The Briard's coat can become matted if not groomed often. The inside of the ears must be kept clean and any excessive hair in the ears or between the pads of the feet should be removed.

In 1863 a man named Pierre Megnin differentiated two types of sheepdogs, one with a long coat, which became known as the Briard, and the other with a short coat, which became the Beauceron. to improve the dog's look. The Briard became popular only after the Paris dog show of 1863. In 1897 the first shepherd dog club was founded and both the Beauceron and the Briard were accepted into it. Prior to 1889 the Beauceron and Briard had a reputation of being a flock guard who was brave but one who was more incline to snap and bite in defense of its flock. Both breed's temperaments were softened through selective breeding. Charlemagne, Napoleon, Thomas Jefferson and Lafayette all owned Briards. Centuries ago the Briard was used to defend its charges against poachers and wolves and by the French army, ignoring exploding bombs and artillery fire. The dogs were used to run messages, detect mines, pick up trails, support commando actions, find the wounded, and carry food and ammunition to the front lines. The Briard may have been named after Aubry of Montdidier, who owned an early Briard, or for the French province of Brie, although the dog probably does not originate in that area. The Briard was recognized by the AKC in 1928. The Briard still serves as a flock guardian and herder. They also make great family companion dogs. Some of the Briards talents are search and rescue, police work, military work, herding, watchdog and guarding.

"These are two young Briard puppies bred by Big Tree Briards in Hemlock, New York. The young male on the left has had his ears cropped. The young female on the right has natural ears." Photo courtesy of Andrea Barber Photography 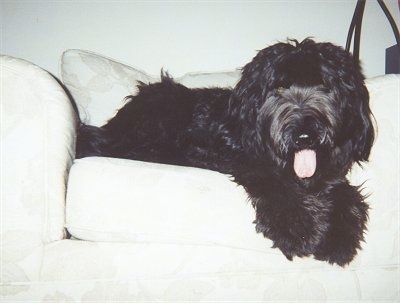 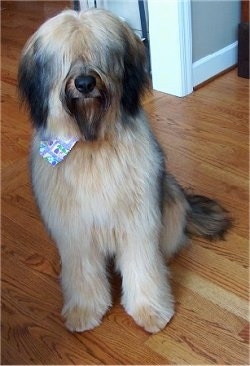 Alfie Marie Noble the Briard with his coat freshly groomed. 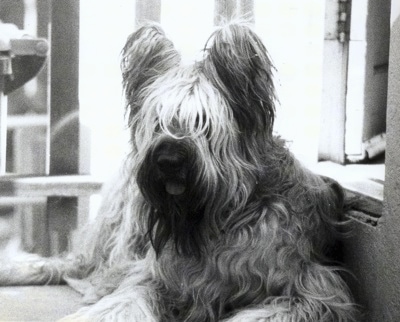 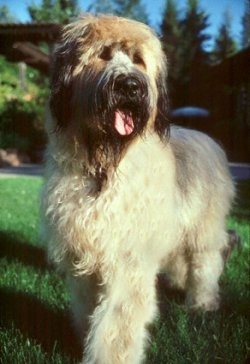 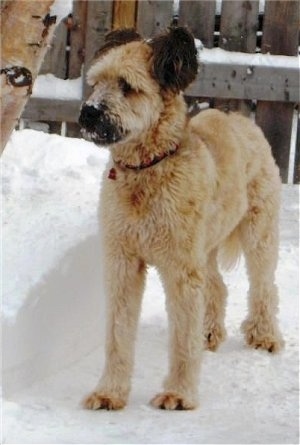 Jazz the Briard at four years old, shown here with his coat groomed short. "He loves to be outside, especially after a new snowfall!" 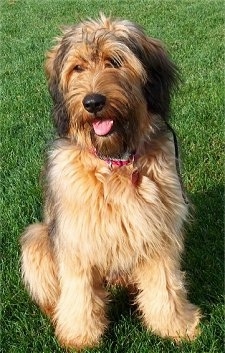 Alfie Marie Noble the Briard out in the yard 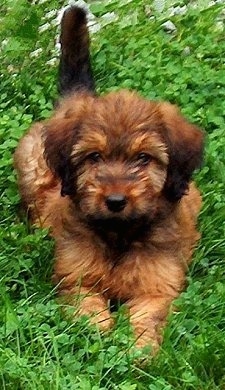 Alfie Marie Noble the Briard as a young pup

See more examples of the Briard