The Adventures of Bruno the Boxer and Spencer the Pit Bull

Spencer and Junior went on a long pack walk together. After their walk they had a great play session. When Spencer plays with his brother Bruno the Boxer, the play is stepped up and a bit rough. Spencer is used to big dogs, but I was happy to see that when he played with Junior, he stepped it down a notch and was careful not to crush the little dog with his Pit Bull rolls across the ground. Junior really wore Spencer out. He was still running circles around Spencer when Spencer was all worn out. 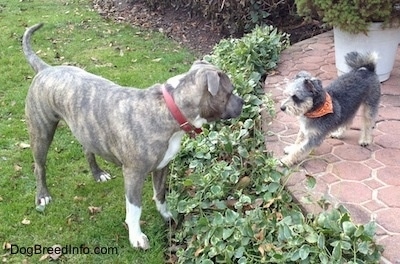 After the pack walk, we paused to talk for a bit and the dogs looked like they wanted to play. They were still on a leash and we decided to take them to the backyard and let them go at it. I noticed for a split second Junior bared his teeth at Spencer and Spencer went into a play pose. It was an interesting conversation between the two dogs. Junior had just said to Spencer, "I will play with you, but I set the rules. You got that?" Spencer said back, "Got it, got it! I don't care, you can be the boss, let’s just PLAY!" And so it went. We walked the dogs to a safe area and Junior and Spencer played. I was happy to see Spencer was careful not to hurt the little dog. 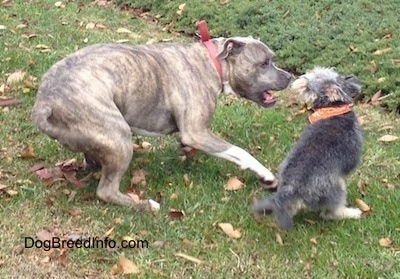 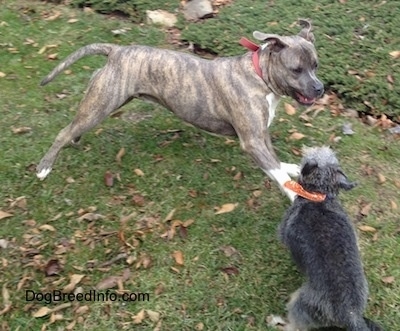 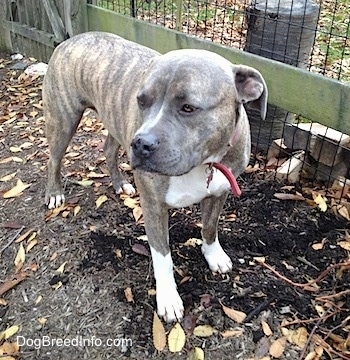 Oh my, what is that I see? A hole near the fence! It looks brand new judging by the darker soil. Oh Spencer, we cannot blame this one on Junior; the evidence is all over your nose! Please do not teach Junior to dig holes in his backyard. 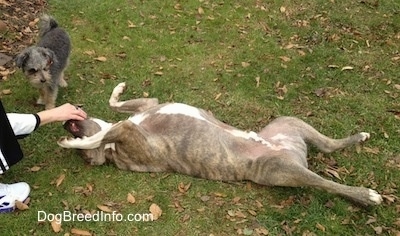 Junior’s owner is usually apprehensive about Pitbulls, but today she got to see that the bad reputation is not all it is cracked up to be. Spencer is sweet and as submissive as they come.