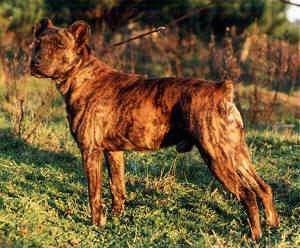 The Cão de Fila de São Miguel (Azores Cattle Dog) bears the specific characteristic of being a medium-sized dog, which sets it apart from other cattle dogs, as on average it is much bigger. They are square headed animals, with very strong jaws, expressive dark brown eyes and well-developed musculature of the trunk and limbs. They walk with the typical characteristic of wadding slightly fringed in the anal region and buttocks. Their color encompasses the reddish-yellow, streaked and the gray, also streaked, in both the dark and the light tonalities; it may also have white patches in the frontal region, chin, chest and feet. The tail should be docked by the 2nd or 3rd vertebra. The ears are normally cut round.

The Cão de Fãila de São Miguel is a rustic and dominant animal, capable of remaining outdoors during the entire year guarding the herds and the tools used in agriculture. It's very intelligent and quick to learn, executing various commands. As a dog used in driving milk cows it usually bites low so as not to wound the mammary glands of the cows, biting higher on the lost cattle. It is a working dog par excellence, but also a good guard dog of property or protection dog. It can have a very sharp temperament, but is docile with his master. Very intelligent with a great capacity to learn. For the right owner, this breed makes an excellent guard and watch dog. They are very defensive of their territory. He should be well socialized, preferably when young with both dogs and people, especially with children, as the breed tends to be naturally wary of strangers, though he is very friendly with those he knows. In order to successfully keep a Cão de Fila de São Miguel the family must achieve pack leader status. It is a natural instinct for a dog to have an order in their pack. When we humans live with dogs, we become their pack. The entire pack cooperates under a single leader. Lines are clearly defined and rules are set. Because a dog communicates his displeasure with growling and eventually biting, all other humans MUST be higher up in the order than the dog. The humans must be the ones making the decisions, not the dogs. That is the only way your relationship with your dog can be a complete success.

The Cão de Fila de Sãao Miguel should live next to its owner. This dog is not suited for apartment living. It needs a job to do.

Needs daily exercise, which includes a daily, long walk. It loves to run, play and work.

In 1427 the Azorean Islands were discovered. They were covered by lush vegetation that was hard to penetrate, but there were no mammals. The sailors of Prince Henry threw cattle in the maritime fringe of the islands. By 1439 there were abundant herds of domestic cattle in São Miguel. Raised free, the cattle grew wild. Therefore, a need for cattle dog, or fila dog, came. The most important dog was the Fila da Terceira (now extinct) which was then bred with other molossers to make the Cão de Fila de São Miguel. This dog became an indispensable element to cattle breeding, besides being an excellent guard of his master’s possessions and family. 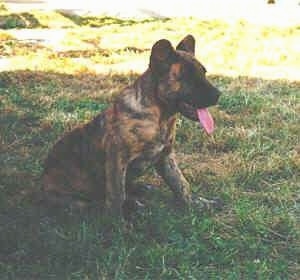 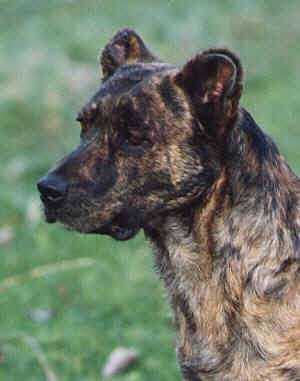