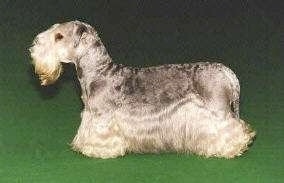 The Cesky Terrier, also called the Bohemian Terrier, is a short-legged, moderately long dog. It looks similar to a Sealyham Terrier. The wedge-shaped head is about 7-8 inches (17-20 cm) long and 3-4 inches (7-10 cm) wide, with a bushy beard, mustache and eyebrows. The bridge of the nose is straight with a small stop. The nose is black in gray dogs and liver-colored in brown dogs. The teeth meet in a scissors or level bite. The tail is 7-8 inches (17-20 cm) long. The medium- sized, almond-shaped eyes are dark brown in gray colored dogs, and a lighter brown in brown dogs. The high-set ears are triangular, folding forward close to the head. Dewclaws may or may not be removed. The long, silky coat is slightly wavy. Puppies are born black, black and tan, or brown. When the dog reaches about 2-3 years old the adult coat color will be set and is shades of gray to a dark charcoal to platinum gray. Sometimes black appears on the head, ears, feet and tail. The head, beard, cheeks, neck, chest, limbs and around the vent may have white, coffee, brown or yellow markings. The light coffee color is quite rare. The tail may have a white tip or collar.

The Cesky Terrier is patient, playful, sporty yet calm. A sweet and joyful dog that is good with children, it is brave, loyal, obedient and courageous. Intelligent, very trainable and easy to handle, it is important to socialize them while they are puppies, letting them meet with various people and different animals in positive circumstances to experience a variety of situations. This will help them be well adjusted so they can grow up to be happy adults. They love people, especially children and are fairly friendly with strangers, but like most terriers, if you are not 100% pack leader, they can be feisty, stubborn and fearless. This sociable dog gets along well with other dogs and with other household animals. The Cesky travels well. It is an excellent companion dog that is capable of playing with children, yet at the same time being an attentive and threatening house guard. Make sure you are this dog's firm, confident, consistent pack leader to avoid Small Dog Syndrome, human induced behavior problems. Always remember, dogs are canines, not humans. Be sure to meet their natural instinct as animals.

Generally healthy. Some are prone to Scottie Cramp Syndrome, sometimes called Wobbly Scottie, which causes the dog to walk in an awkward movement.

The Cesky Terrier is a good dog for apartment life. They are moderately active indoors and will do okay without a yard.

The Cesky Terrier enjoys running and playing through a wooded area or open countryside. It also needs a long daily walk on or off the lead, but always in a safe area. They are small, but will make a fairly good jogging companion. Ceskys have an average demand for exercise.

The Cesky should be trimmed regularly, leaving the hair long on the stomach, legs and around the face to form the moustache, beard, and eyebrows. For pet dogs it will need to be trimmed at least four times a year. Show dogs require more frequent grooming. Unlike most other terriers the Cesky is generally clipped with electric clippers, instead of being stripped. The longer hair needs to be brushed and combed at least twice a week, depending on the condition of the coat, to prevent tangles. Clip the excess hair between the pads of the feet and remove loose hair in the ear passages. This breed sheds little to no hair.

A relatively new breed, the Cesky Terrier was developed from crosses among the Sealyham, Scottish Terrier and possibly the Dandie Dinmont. The dog’s original developer was a Czechoslovakian breeder named Frantisek Horak who was successful at getting them recognized by the FCI in 1963. Mr. Horak's goal was to breed a dog that was narrow enough to successfully get down into the dens and burrows to hunt rats and fox. By the 1980s breeders felt the Cesky Terrier no longer looked like the dogs Mr. Horak bred, so they crossed them yet again with Sealyham Terriers. The breed was first imported to the USA in 1987 and to this day is quite rare. By 1993 there were said to be only about 150 Cesky Terriers in the USA. The breed may be shown at the National Cesky Terrier Club, rare breed shows, state kennel clubs and at some FCI and UKC shows. The Cesky Terrier is a good hunter, tracker, watch and guard dog. 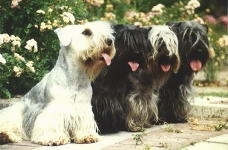 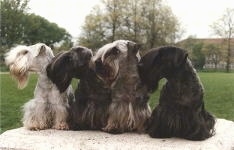 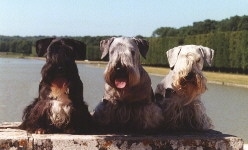