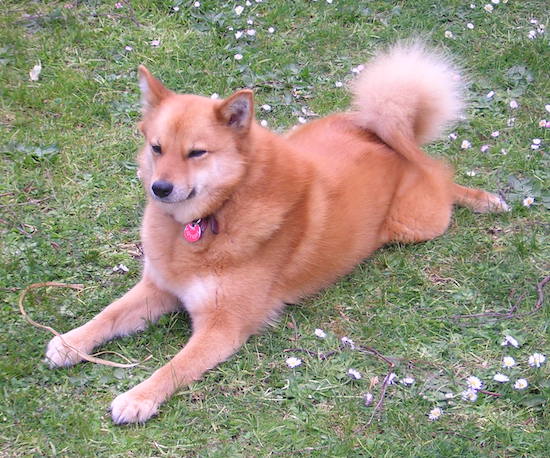 Kati the adult Finnish Spitz laying in the grass

In appearance the Finnish Spitz reminds one of a fox. The body is muscular and square. The head is flat between the ears, rounding slightly at the forehead. The narrow muzzle has a pronounced stop and is wider at the base where it attaches to the skull, tapering to a point. The nose and lips are black. The teeth meet in a scissors bite. The dark, almond-shaped eyes have black rims. The ears are set high, erect and open toward the front of the dog. The legs are straight when viewed from the front. The topline is level. The chest is deep, reaching to the elbows. The plumed tail curls up over the back and down the side with an abundant amount of hair. Dewclaws are sometimes removed and the catlike feet are round. The double coat has a short, soft, dense undercoat with a long, straight, harsh outer coat. Coat colors include various shades of golden-red, red-brown and yellowish-red to honey-colored, with or without small white markings. Puppies are born dark and lighten to a reddish color as they get older.

The Finnish Spitz is friendly, active, playful, keen and courageous. It can be obedience trained, if the owner has an air of natural, gentle, calm, authority to them. The Finnish Spitz is renowned as a hunting dog, and also makes a great companion for family members of all ages, especially children and older adults. This breed does not fully mature until it is about 3 to 4 years old. The Finnish Spitz is aware of its place in the dominance hierarchy, and owners need to clearly communicate to the dog that its place is below all humans. Finnish Spitzes that believe they are higher in the order can become protective, demanding affection and attention, become domineering and can be fairly dog aggressive. Meek or passive owners will find them hard to manage. Socialize them well or they can be reserved and sometimes aloof with strangers. They are generally good with other pets. This breed is lively and curious, though not overwhelmingly so. They are loyal to their own families, but require much consistent patience and understanding. They are good watchdogs, but are not guard dogs. In Finland the Finnish Spitz is nicknamed the "barking bird dog." They were bred to bark a lot and even participate in barking contests, where it is not uncommon for a dog to bark over 150 times in one minute. They were bred to bark (which can sound like a yodel) continuously to point the hunter in the direction of the game bird, therefore you will never get this dog to be totally silent. If you leave the dog outside for long periods of time without the proper exercise or human leadership it can become a nuisance. Teach this dog enough is enough and to limit its barking. Do not allow it to bark at you, as a dog that barks at its owner is displaying dominance behaviors. With the right owner they can make wonderful pets.

The Finnish Spitz will do okay in an apartment and without a yard provided it gets enough exercise. It is relatively inactive indoors and prefers cool climates.

The Finnish Spitz needs plenty of exercise, including daily, long walks or a jog, where the dog is made to heel beside or behind the human holding the lead, never in front, as instinct tells a dog the leader leads the way, and that leader needs to be the human. Simply running around a large backyard will not satisfy the canine's instinct to migrate. With enough proper exercise, it will be content to lie at your feet at night. This breed makes an excellent jogging companion.

The Finnish Spitz has a self-cleaning coat, as do most other Arctic dogs. Regular grooming with brush and comb is still necessary to remove dead hair. The coat does not have a doggie odor. This breed is a seasonally heavy shedder.

The Finnish Spitz dogs were originally known as the Suomenpystrykorva (the Finnish Cock-Eared Dog) and the Finnish Barking Birddogs. About 2000 years ago they were brought from the Volga River area of central Russia to what is now Finland, and are considered the National dog of Finland, and are mentioned in several patriotic songs. They were used to hunt small game. When the dog would find their pray they would alert the hunter with their distinctive yodel type, ringing bark, pointing with their head in the direction the animal was in. The breed is more popular in Scandinavian countries and less popular in the USA, most likely due to their reputation of using their bark to alert their masters. The Finnish Spitz makes a good bird dog. It was first recognized by the AKC in 1987. 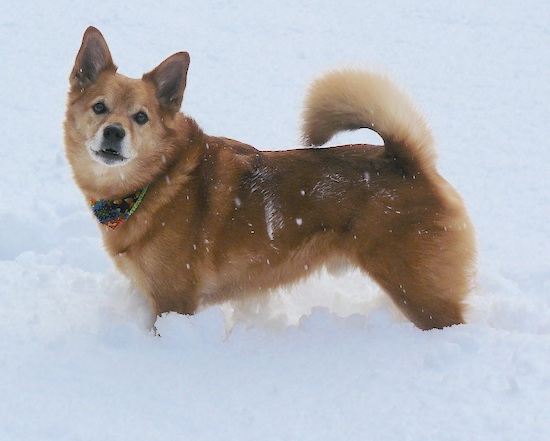 "This is Mooney, a Finnish Spitz out playing in the snow with us. He was about 10 years old in this photo that I took. The description and temperament found on dogbreedinfo.com is right on. We would always know when someone had pulled into the yard or was at the door or if the fox was on the porch; he loved to give us warning barks. He was great with our two little kids and very patient with them. When they got too energetic or loud, he would just head to somewhere quieter. He was smart too, he would problem solve how to get to a treat or toy when we hid them. He loved to run around outside and then come sit at the door and bark when he was ready to come back in. He was a great dog even toward the end when he became sick." 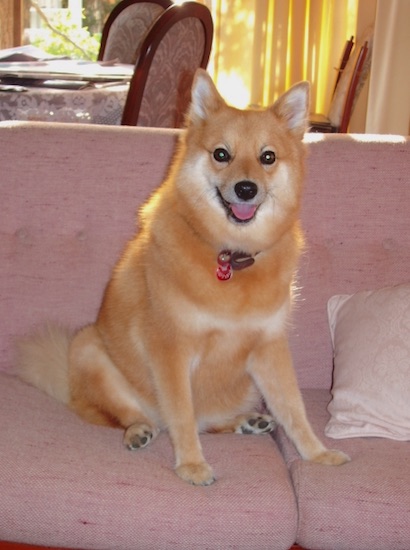 "Kati the Finnish Spitz is our family dog. She is a real charmer and is also wonderfully photogenic! We have had Finnish Spitz in our family for a years and they have been great fun. She is our fourth. Every dog we have had has been a source of joy and good times. Most of our family photos have been of our dogs! I keep reading that they bark a lot but in my experience they bark no more than an average dog if left unattended. We have had a cat with most of the dogs and they all took to each other extremely well (although there was a couple days of barking with our first Spitz when we got our cat Oscar). After that however, they became best of friends. The only thing that bugs me about this breed is that they lose quite a bit of hair. So many times I have been playing with the dogs and afterwards I have been covered in hair!! But that is a small gripe I guess, any dog with longish hair/fur would be nearly the same. It isnt something unique to this breed. All in all I just love them, they are fun, outgoing, energetic and packed full of personality. Plus they are quite independent which I like. Dogs that are slavishly obedient just arent that appealing to me. Personality goes a long way!" 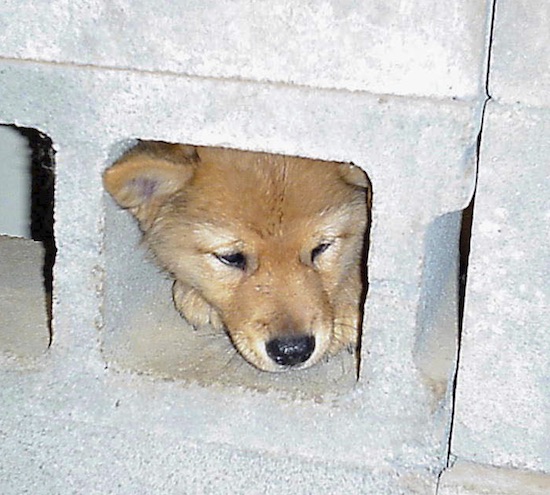 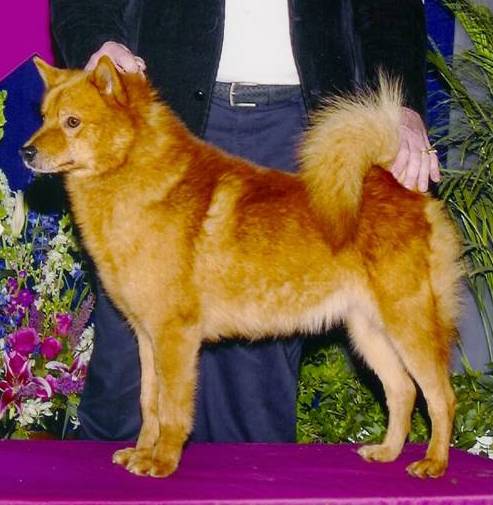 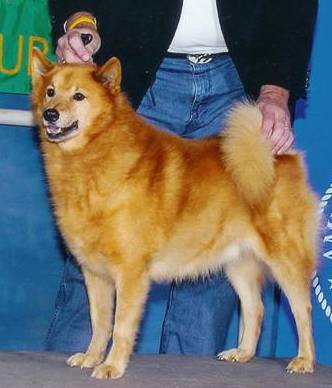 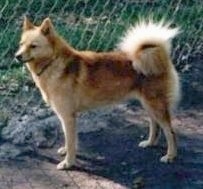