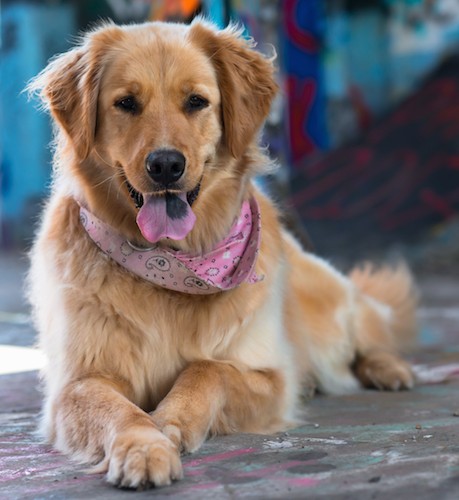 "This is my Golden Pyrenees, Saige. She's about 7 years old, and has the sweetest disposition of a Golden, always begging for pets and taking care of my Chihuahua like a puppy. She "defends" our house by barking at everything, even at night. With all of her fur, she gets hot very easily and loves to sleep on the floor next to our vent. Walks are her favorite thing in the world, especially off-leash ones. No amount of walks is enough. We rescued her from her first home, where she lived outside with her brother her entire life. She was never allowed in, so now she has anxiety and is terrified of thunderstorms. Now that she lives with us, taking naps on couches and beds is one of her favorite past times. She was never taught to fetch, but she watches our little dogs and sometimes will play with us. Saige loves to lick little children's fingers and stands perfectly still to be pet."—Photo credits to Robin Houck (Teneyes)

The Golden Pyrenees is not a purebred dog. It is a cross between the Golden Retriever and the Great Pyrenees. The best way to determine the temperament of a mixed breed is to look up all breeds in the cross and know you can get any combination of any of the characteristics found in either breed. Not all of these designer hybrid dogs being bred are 50% purebred to 50% purebred. It is very common for breeders to breed multi-generation crosses. 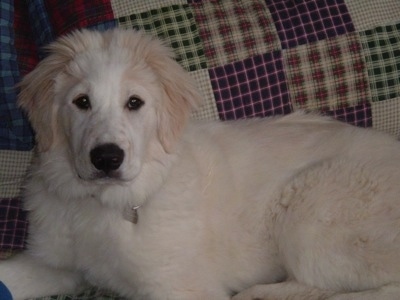 "Hello, this is one of my dogs named Charlie He is a Golden Pyrenees. He was born at the end of January 2008 in Saskatchewan. Charlie is a laid-back, easy-going and very friendly dog. His best friend is my 12-year-old boy; they are the perfect match. He has a temperament of a Great Pyrenees; he likes to watch the world go by, but when he is outside playing ball he is as gentle as a Golden Retriever. Charlie is not a very active dog. We go to the dog park as many times as we can in the winter and most days in the summer he runs around for about 30 mins and then is looking to mom and dad to go home. Charlie lives with two cats that he gets along with great, one snake, and two Great Danes named Stella (white Dane; she is deaf) and Dexter, a mantle Dane that just came to us in January of 2010. I have trained my dogs with the help of Cesar Millan and Brad Pattison, host of "At the End of My Leash." Both shows and books have helped me and my family have a calm pack with all the humans being pack leaders. I owe them both a world of gratitude. Without knowing the training tips I have learned my home would be a scary place to visit and live." 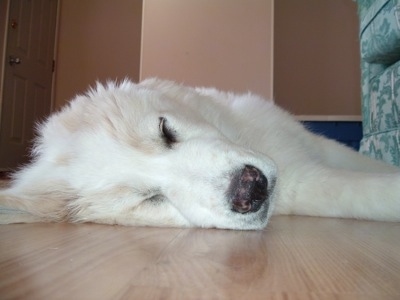 Charlie the Golden Pyrenees taking a nap on the floor 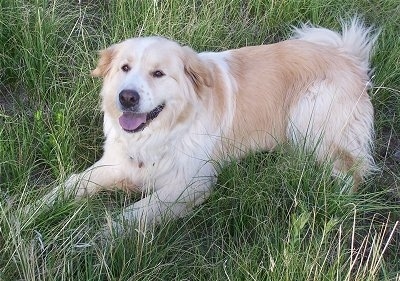 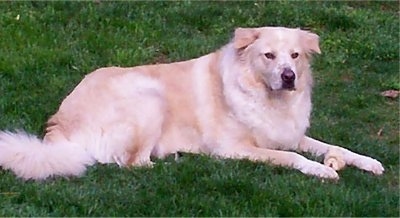 "This is my dog Luke at 6 years old. He is a Golden Pyrenees who we found at our local shelter in NC. He is so sweet and is famous in our neighborhood as everyone loves him. When I found him, he was 40 pounds at 1.5 years old. He had been a stray for those 1.5 years and fed off eating grubs mainly. When we brought him inside, he did not know what to do with stairs so I had to carry him up and down the stairs to teach him. Let's say he has blossomed since we brought him home, and he now weighs 110 pounds. He is the best dog we've ever had and would highly recommend his hybrid. Does not have a mean bone in his body." 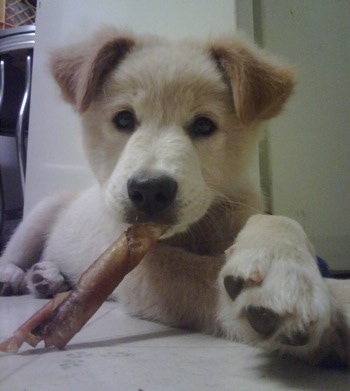 "Fen is an eleven-week-old Great Pyrenees / Golden Retriever mix that we rescued from our local shelter. He is the picture of both breeds; he's very good with children, even at such a young age, gentle, intelligent and quite lazy. He weighs 30 pounds in these photos, and gets bigger by the day." 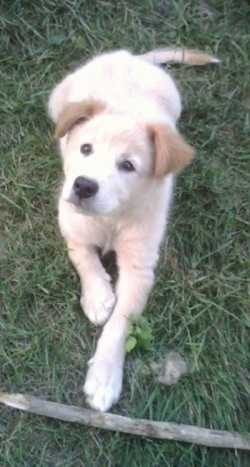 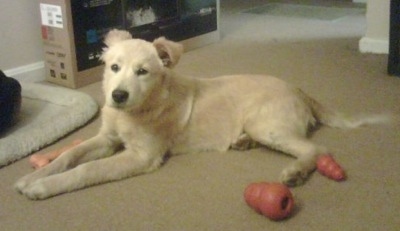 "Fen is now 6.5 months old and 70 pounds. His coat has the texture of a Golden, but hasn't completely filled out like a Pyrenees. He's got a very low energy level; two 20-minute walks a day will suffice for him. He eats about two cups a day and maintains a very healthy weight. Our vet expects him to be around 115-120 pounds as an adult with a projected height of 30 in. at the shoulder.

"He's got the protective nature of a Pyrenees, excellent watch dog. He's trained very well thus far and excels at demanding tasks. Fen adapts well to new people and situations, and is currently working toward getting his Canine Good Citizen certification." 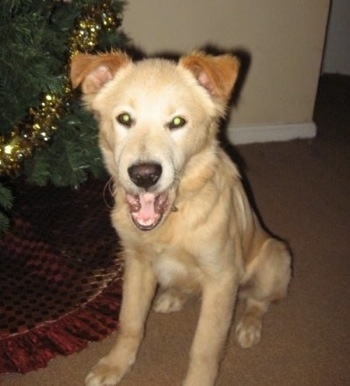 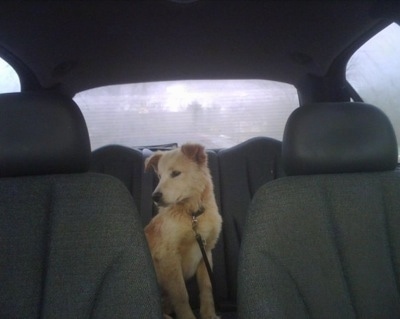